Identity Economics: How Our Identities Shape Our Work, Wages, and Well-Being

Traditionally, economists have had a one-dimensional view of human behavior. They didn’t think it mattered much as long as the economic outcomes they predicted actually materialized. More recently, however, some economists have begun arguing that the goal of microeconomics should be to explain why and how things happen, in which case a fuller and more realistic view of human behavior is essential. Two of them, George A. Akerlof, the Koshland Professor of Economics at the University of California and 2001 Nobel laureate in economics, and Rachel E. Kranton, professor of economics at Duke University, have set out to help create such a view in Identity Economics: How Our Identities Shape Our Work, Wages, and Well-Being. They describe it as a “primer on identity” that “should open a world to be studied” by economists. They do not disappoint. 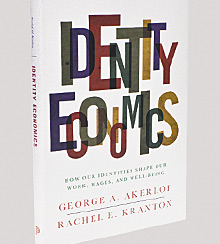 Although written with some economic jargon, Identity Economics is an accessible introduction to the role of identity in the decision making of individuals. The authors argue that a person’s choices about how to act, in the short and long term, are influenced by his or her social context. Thus in the caste-conscious Indian society, high-status Brahmans treat so-called untouchables with disdain. Transfer those same people to a more egalitarian culture and eventually they will behave differently. Change the context, and you change their choices. In other words, much of our behavior is determined by how we classify ourselves socially, and by the norms and ideals of the groups to which we belong and aspire to belong.

Akerlof and Kranton explore how identity affects economic outcomes involving racial minorities, organizations, educational performance, and career selection, as well as the methodology of economics itself. For each topic, they first discuss the implications of classical utility theory and then show the benefits of adding the “identity utility,” which encompasses the identities, norms, and ideals of social categories, as well as the gains and losses incurred when human behavior either conforms with or contradicts them. This necessarily formulaic approach (given their economist target readers) is leavened with stories that illustrate how the concept of identity helps clarify the economics of complex social issues.

For instance, most current economic theories of education see teenage students as rational decision makers who are continually weighing the economic costs and benefits of getting a high school education. But this view cannot explain why U.S. education standards have slipped so badly over the past few decades. In applying the identity lens, the authors show how the continuing democratization of the U.S. education system — which has allowed high school students an ever-greater say in their curriculum — has led to a collapse of these standards. Why? Instead of a homogeneous group of students who see themselves as insiders, that is, as members of an institution with a mission to learn and achieve, students have become a more heterogeneous group, finding their own identities in the multiple boutique offerings of what some critics have called “Shopping Mall High.” As students have increasingly seen themselves as outsiders, their performance has dwindled and they have left high school in greater numbers, even though the costs of this behavior outweigh the benefits.

Although the concept of identity makes eminent sense at the conceptual level, its implications for the key neoclassical notions of market equilibrium and predictability may be problematic, because identities are fundamentally unstable and open to manipulation. For instance, identity economics may offer much more radical explanations for some phenomena, such as the dramatic divergence of CEO compensation from its historical relationship with employee compensation. Maybe CEO compensation isn’t based on market forces at all; maybe it is driven, as many observers have already suggested, by the forces that come into play when boards of directors identify more closely with CEOs than with shareholders. In short, once admitted to the discipline, identity economics could turn out to be a Trojan horse. Critics of the neoclassical economic synthesis and its influence on management should probably be cheering, but quietly.