Gustavo A. Cisneros has transformed old-line, product-based local businesses that made money in the rough-and-tumble economies of Latin America into a web of New Economy media partnerships. Instead of fighting for space at the corner grocery or neighborhood retail stores, the 56-year-old chief executive of the ever-expanding media conglomerate the Cisneros Group of Companies has been able to capture even greater value in the cyberworld of computers, satellites, and cable. 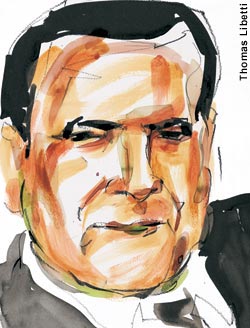 It matters little that his family-owned business — 70 companies in 40 countries employing 37,000 people — is not a household name. By controlling programming, packaging, and distribution, and building an expanding network of alliances with major media partners such as Playboy Enterprises, the Cisneros Group has been able to tap the insatiable thirst for Hispanic entertainment worldwide, and revenues are expected to reach $4 billion this year. "The creation of Playboy TV International through an alliance with Playboy Enterprises enables us to immediately launch channels around the globe, backed by the strength of one of the world's most recognized brands," says Mr. Cisneros.

For three decades, from the age of 25, when he took over the trucking and bottling business founded by his father in Caracas in the 1930s, Mr. Cisneros has been repainting his corporate landscape one stroke at a time. The Cisneros Group's shift into media took off in 1995 when Mr. Cisneros sold the highly successful sporting goods company Spalding and baby-products giant Evenflo on the way to amassing a $2 billion war chest for his media strike force.

He also allied himself with fellow Latin billionaires Emilio Azcarraga (Mexico's Televisa) and Jerry Perrenchio, and together they have established Univision as the dominant Spanish-language television network in the United States. In 2000, the Cisneros Group acquired the popular Latin American Web portal and Internet service provider El Sitio, and in August established a partnership with America Online Latin America (AOLA).

Even before the acquisition of El Sitio, Mr. Cisneros owned 16 percent of the fledgling dot-com, whose stock price plummeted from a high in March of $44 to $3.25 at the end of October. But near-term gyrations don't worry him. While El Sitio today claims some 5.8 million of the 14 million total Internet users in Latin America, Mr. Cisneros is holding fast to his future stake in what New York-based Jupiter Media Metrix predicts will be a market of 37.6 million online consumers by 2003 — with $1.7 billion in advertising — and 67 million Internet users by 2005.

The AOLA-El Sitio combination gives the Cisneros Group a big slice of this promising Latin American Internet market. Again, he focused on growing value through a network, piece by piece, partnership by partnership.

"Our initial investment was $200 million," Mr. Cisneros explains in reference to AOLA, "but the plan, since the beginning, was to invest a billion dollars. We expect to create a regional network making AOL No. 1 in Brazil. This partnership is very important, and it will add the most important service — the Internet in Latin America — to the rest of our media assets." And after Brazil, he confidently adds, "we shall swiftly move to the markets of Mexico and Argentina and thereafter to the rest of Latin America."