The Economics of Enough: How to Run the Economy as if the Future Matters

Economist Diane Coyle, a visiting professor at the University of Manchester and former advisor to the British government, sees the recent worldwide financial crisis as a valuable opportunity to grapple with fundamental shortcomings in the creation and measurement of economic policy. In The Economics of Enough: How to Run the Economy as if the Future Matters, she identifies and addresses what she regards as the two root causes of the crash of 2008: the failure of macroeconomics to frame and measure policy objectives and the chronic inability of politicians to make policy decisions that are in the best long-term interest of their constituents (i.e., that address the “trilemma” of efficiency, equity, and liberty).

Coyle divides the book into three unequal parts that cover the challenges (about 60 percent of the book) and the obstacles (25 percent) to better economic policy, and a manifesto for achieving it (15 percent). As this proportion suggests, the book is long on problem identification, but rather short on solutions. Nevertheless, it is helpful for the targets it identifies. For instance, Coyle tackles the current monopoly of GDP growth as a measure of collective happiness. Like most economists, she thinks that growth and happiness are causally connected, but cites evidence showing that maximizing growth isn’t always appropriate when the future is taken into account. This is the central dilemma of “enough”: that we need enough growth to make us happy, but not so much as to make future generations unhappy. 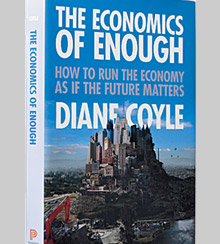 Coyle’s adoption of the intangible objective of happiness, with its dependency on multiple, complex phenomena, underlines the inadequacy of GDP as a metric. Measurements of GDP are already seen as deeply flawed in their failure to discriminate among differences in quality and to capture the value of unpaid work, such as parental care and volunteer activities. In addition, GDP’s focus on the flow of value versus its accumulation allows nations to enhance their output at the expense of their balance sheets.

When you add to this the realities of democratic political systems, in which the need to get elected regularly swamps the interests of not-yet-voting future generations, and the revolution in information and communications technology, which has enabled a global economic system that has left its political and social counterparts far behind, the challenges and obstacles to improving economic policy seem daunting. In fact, Coyle finds precious few successful responses she can point to, although she does single out the Australian Bureau of Statistics and its “dashboard” of indicators of progress.

Coyle criticizes bankers for their greedy ways, but she remains staunchly loyal to mainstream economics. This seems inconsistent. The great promise of the “dismal science” is that it harnesses individual desire to make us collectively better off. But if the invisible hand allows bankers to pursue their happiness to the detriment of the rest of us, can it really help when the definition of “us” is expanded to include our descendants? Mainstream economics has been such a prominent part of the consciousness that led to the Western world’s current predicament that one wonders how — and perhaps even whether — it can play a leading role in our escape from it. It’s disappointing that Coyle fails to address this.