Toyota under Fire: Lessons for Turning Crisis into Opportunity 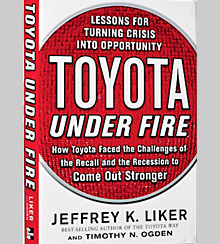 In August 2009, Jeffrey K. Liker, professor of industrial and operations engineering at the University of Michigan, and Timothy N. Ogden, executive partner at the communications firm Sona Partners, were putting the finishing touches on a book about how Toyota develops leaders when the news came of the horrific deaths of four people in a Lexus sedan that had accelerated uncontrollably. The tragedy marked the beginning of a crisis that severely damaged Toyota’s reputation and revenues.

In Toyota under Fire: Lessons for Turning Crisis into Opportunity, the authors produce the most comprehensive and detailed review to date of the circumstances that led to the crisis, and the events and contexts that caused it to escalate. Their report is based on extensive interviews with insiders, including company president Akio Toyoda, whose appearance before the U.S. Congress in February 2010 marked the turning point in the firm’s efforts to give peace of mind to its many customers.

After briefly reviewing Toyota’s history and the development of its production and management systems, Liker and Ogden show how adroitly the manufacturer responded to the recession of 2008. Toyota, which famously treats its people as appreciating assets rather than variable costs, did not lay off any permanent employees, as many of its competitors did; neither did it bully its suppliers. Instead, the firm reduced work hours and instituted temporary pay cuts. It also seized the opportunity to work on projects aimed at improving profitability and flexibility, such as reducing the breakeven point of its plants from 80 percent of capacity to nearly 70 percent — a huge challenge for a company already noted for running lean.

By the summer of 2009, it appeared that Toyota would come through the recession with flying colors. Then an auto retailer in California placed a large floor mat from a Lexus SUV in a smaller ES 350 loaner sedan, which caused its gas pedal to jam in the wide-open position. Unfortunately, this did not become known for two months after the fatal accident occurred, while speculation became rife that there was a mysterious fault in the computers that control the pedal–throttle connection. As the media coverage became a circus and the lawyers and politicians started to circle overhead, the public began to believe that Toyota was covering up the facts.

As Liker and Ogden describe the crisis, it becomes clear how hitherto unconnected incidents, practices, and policies — not just at Toyota, but also at regulatory bodies such as the National Highway Traffic Safety Administration — became linked together, spinning the public narrative out of control. For instance, safety and recall matters are engineering issues at Toyota, and decisions regarding them were centralized in Japan. Oblivious to the mounting hysteria in the U.S., the engineers in Japan worked methodically through the problem. They saw no systemic safety concern: Toyota had issued a recall on the all-weather floor mats for the ES 350 in 2007 to eliminate the possibility that they might jam the accelerator pedal, and there had never been any evidence of electronically induced acceleration in any of the company’s vehicles. This geographic disconnect between the problem and the people solving it violated one of the central tenets of the Toyota Way: Decisions must be made as close to the scene of action as possible.

Today, the story has almost disappeared from the news, and the authors contend that Toyota’s reputation and market position have largely recovered. They say that the company survived both the recession and the recall because of the strengths of its entire ecosystem — suppliers, dealers, employees, and culture. Internally, Toyota executives made a number of changes to bridge the gaps between the center and the regions, and overall, their actions seem to have reassured both employees and customers. So in the end, this is a story of how the good guys suffered a setback, but ended up better for the experience, reaffirming Nietzsche’s adage that “what does not kill me, makes me stronger.”