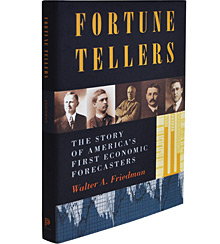 Sunspots appear early in Fortune Tellers, a personality-driven history of the founding of the inexact science of economic forecasting written by Harvard Business School professor Walter A. Friedman. The periodic waxing and waning of these disturbances on the sun’s surface was first noted in 1843 by Samuel H. Schwabe, and their influence on geomagnetic activity on the Earth was discovered in 1852 by Rudolf Wolf and others. Then, in 1878, an economist named William Stanley Jevons published a paper that purported to link sunspot cycles occurring 93 million miles away to business cycles (via the effects of weather patterns on crops). Jevons’s theory has been discredited, but economists still refer to any type of extrinsic random factor that affects economic productivity and growth through its impact on expectations as a “sunspot.”

Like Jevons, all the forecasting pioneers profiled in Fortune Tellers came of age in the 19th century. Some of their names, such as Roger W. Babson and John Moody, are well known today because of the legacy businesses or institutions they left behind. Others, such as Wesley Mitchell and Irving Fisher, are remembered mainly by economists for more esoteric contributions to the dismal science. Still others, such as C.J. Bullock and Warren Persons, are mostly forgotten. Prominent or not, none of them were particularly successful in forecasting economic cycles. In this, they are quite similar to forecasters today.

Prominent or not, none of them were particularly successful in forecasting economic cycles.

Babson and Moody were the Michael Bloombergs of the early 20th century. They developed the collection and sale, media distribution, and charting and analysis of economic and financial data into profitable businesses. Mitchell was a founder of the National Bureau of Economic Research, which is still an eminent institution, and Fisher, a prominent economist whose contributions to index number theory remain in use today, developed an economic forecasting service while teaching at Yale. Bullock and Persons did the same at Harvard. The stock market crash of 1929 and the subsequent Great Depression adversely affected all of these men. It financially ruined Fisher. Babson did rather better, but he moved away from the forecasting business. He actually ran for president in 1940 as the National Prohibition Party candidate, but attracted just 58,000 votes.

Mainly a work of social history, Fortune Tellers only briefly discusses the important critiques of early economic forecasting efforts and the deep problems that forecasting uncovered. For example, Friedman notes that in 1928 Oskar Morgenstern published an investigation into the then current forecasting techniques that cast doubts on the whole enterprise. In short, Morgenstern argued that a forecast, if trusted, would stimulate economic agents to take actions that would doom the forecast’s accuracy.

Friedman also devotes several pages near the book’s end to econometric forecasting models, but he does not mention Robert Lucas’s 1976 critique of these sophisticated multi-equation models based on statistical estimation of relationships between variables like consumption and income, which were widely used for policy evaluations at the time. Lucas argued that because the econometric models were not based on fundamental, policy-invariant economic relationships, they could not be used to forecast policy effects (such as a change in Federal Reserve bond purchase policy). The estimated relationships within the models would themselves change in unknown ways as policy changed. The first work on policy-invariant structural models was done by Thomas Malthus in the early 19th century, but modern mathematical formulations date to a paper by Frank Ramsey in 1928. Neither Malthus nor Ramsey (nor more recent developments in structural modeling) is cited in Fortune Tellers.

As for sunspots and their effects, it’s intriguing to note that these days, a major policy focus is on global warming—an environmental force in which economic activity is thought to influence the climate rather than the other way around. Thus, policy proposals such as carbon taxes are designed to induce economic behavior that will reduce the emission of heat-trapping gases as an unpriced side product of economic activity.

Given the difficulties and fundamental flaws inherent in economic forecasting that Friedman begins to explore in Fortune Tellers, it’s clear that truly daunting problems underlie the making of predictions about the interconnections among future economic activities, induced technological changes, the effects of carbon tax and rationing policies, and the possible climate changes that will result. In particular, predictions about the value to winners and the cost to losers of possible policies will make for some interesting discussions. Perhaps Friedman might take up these topics next.