Leading with Sense: The Intuitive Power of Savoir-Relier 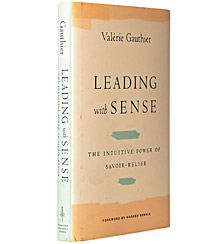 The MBA program at HEC–Paris is consistently ranked among the best in the world. But it wasn’t always. Knowing that is key to understanding how Valérie Gauthier came to write Leading with Sense.

In 2002, when Gauthier was promoted from English professor to associate dean of the school’s MBA program, it was ranked 67th globally. Lacking B-school experience and never having held any other management or leadership positions, Gauthier found herself in a tough spot. “My new position placed me at the head of a dramatically failing program with angry students [and] demoralized staff,” she writes. The process she used to turn things around eventually became her theory of how to lead.

Gauthier had coined the French phrase savoir-relier in 1994 (it roughly translates to “relational intelligence”) as a concept for training 21st-century leaders. Eight years later, she became one of those leaders. As with Daniel Goleman’s emotional intelligence, there’s no numerical quotient for relational intelligence. Instead, Gauthier views leadership as a state of being: “I have argued that by integrating subjectivity into their observation and analysis, leaders open the door to reliable sensibility. Leaders can translate their experience, their understanding of the environment, their confidence, their sensible intelligence, and their courage into meaningful and mindful action.” Thus, savoir-relier is discussed throughout as “an act, a capacity, a mind-set, and a process.”

This 200-page book has ambitious goals. First, to help readers place Leading with Sense into context, Gauthier provides an impressive overview of relevant literature, both pop and academic. She covers a lot of ground, freely moving from super-succinct summations of bestsellers, like Jim Collins’s Good to Great: Why Some Companies Make the Leap…and Others Don’t (Harper-Business, 2001), to more arcane works, like René Girard’s Deceit, Desire, and the Novel: Self and Other in Literary Structure (Johns Hopkins Press, 1965).

Second, Gauthier profiles three Europe-based leaders who each demonstrate one of the traits, or attitudes, of savoir-relier. These attitudes, she says, “enable leaders to build strong relationships and make confident decisions, despite the tensions inherent in business and everyday life.” Combined, the three offer a profile of a savoir-relier leader.

She begins with the CEO of General Electric in France, who demonstrates the importance of being genuine—that is, “growing your own self-confidence first and then helping others to grow.” Next, the CEO of Apple’s Europe, Middle East, India, and Asia operations demonstrates the importance of being generous. This means not expecting a quid pro quo. “If you know when you are generous, then you are not really generous, because your generosity then has a purpose, an objective with an expected reward,” writes Gauthier. “Generosity does not expect return.”

The other executive, Apollonia Poilâne, does not have the same corporate credentials, but she is fascinating. Her parents, who owned France’s most celebrated artisanal bread bakery, died in a helicopter accident about the same time she was admitted to Harvard. She decided to be both an American college student and a semi-remote French CEO. Poilâne demonstrates the importance of being generative, which, Gauthier explains, “means being capable of production and reproduction, able to foster innovation and influence.... The generative leader must do more than simply act; he or she must act with sense and passion, to drive progress, to innovate.”

“The generative leader must do more than simply act; he or she must act with sense and passion.”

The third goal of Leading with Sense is to provide the reader with ways to make savoir-relier take hold inside an organization. Gauthier has enough experience in both leading and helping others lead to know that a single savoir-relier leader inside a large, complex firm will be either adrift or doomed. Thus, she discusses the need for a “relational circuit,” and moves into full organizational development (OD) mode. (Organizational development is an old term; Gauthier seems to prefer “building sense.”) As with anything OD-related, you will find charts and diagrams with arrows and circles. You also will find content that’s close to train-the-trainer details, including the outline for a four-day savoir-relier seminar.

The book closes with a fourth and quite unexpected subject: poetry. The late Warren Bennis, who contributed the book’s foreword, found this extremely engaging. “This book,” he wrote, “draws management inspiration from an unlikely source: poets.... Poetry is all about delivering a message that provokes emotions, that inspires images and influences ideas, the same way that effective leaders must.”

As an example, Gauthier reprints “Fire and Ice,” a nine-line poem by Robert Frost. The essence of the poem is that the world could end in the fire of intense (and competing) desires, or it could end with relationships devolving into an icy world of hate. Since the main purpose of this book is to teach relational intelligence, Gauthier shows how reading the poem aloud and playing with its possible meanings (especially those involving the importance of relationships) can make you a stronger leader. “The poem is a text, an interface between the poet and you, the reader,” says Gauthier, “just as an organization is an interface between the people who work for it and its stakeholders.”

Gauthier’s book, said Bennis, “will lead to a more responsible, intuitive, and human approach to business.” Yet most managers and executives will find it hard to master the possibilities of Gauthier’s approach based only on this book. Leading with Sense is nonetheless worth your time, because it will stretch your thinking about what passes for corporate leadership today versus what could be.