The Code Economy: A Forty-Thousand-Year History 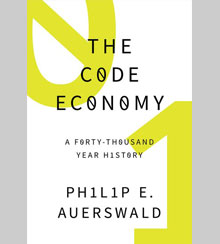 Jobs are the burning issue of the day. But while politicians are busy erecting physical, economic, and rhetorical walls to corral and preserve jobs, a larger and more fundamental question looms. As advances in artificial intelligence and machine learning permeate every industry, will there be any jobs left to protect?

Philip E. Auerswald, associate professor at George Mason University’s Schar School of Policy and Government, calls this question “The Great Man–Machine Debate.” In his engaging and wide-ranging book, The Code Economy: A Forty-Thousand-Year History, he seeks to answer it by reframing how we think about economic dynamics and progress. “The microeconomics you learned in college was generally limited to the ‘what’ of production: what goes in and what comes out,” Auerswald writes. “This book is about the ‘how’: how inputs are combined to yield outputs.”

Auerswald has a more expansive definition of the word code than the typical computer scientist. For him, code encapsulates the how of production — that is, the technology and the instruction sets that guide production. The processes Paleolithic peoples used to create stone tools, the punch cards that Joseph Marie Jacquard used to direct looms in France in the early 1800s, Henry Ford’s assembly lines, and the blockchains first described by the person (or persons) named Satoshi Nakamoto in 2008: All these are, in Auerswald’s view, examples of code.

Without code — which many analysts fear will eventually destroy jobs — we might not have had jobs in the first place. Because code encompasses writing and reading, it allowed us to overcome our limited ability to perform complex tasks from memory alone. It enabled and encouraged us to specialize and work in groups. The job, writes Auerswald, “is a relatively recent product of the coevolution of code and work.” In this view, code has served as the impetus for the development of economies, and of society itself.

But development goes hand in hand with disruption. As code evolves, so does work — and sometimes, the jobs attached to the old versions of work cease to exist. That’s why Lyonnaise silk weavers destroyed an early model of Jacquard’s automated loom in 1801, and a decade later, textile workers in Nottingham, England, rioted when machines de-skilled their work. The latter gained lasting fame as the first Luddites.

Auerswald makes a more nuanced argument that takes up the middle ground between Rifkin and Kurzweil. As code evolves and changes the nature of work, he explains, some old jobs disappear and some new jobs appear. In 2000, for example, 600 well-compensated traders worked at the U.S. cash equities trading desk in Goldman Sachs’s New York headquarters. Today, there are two left; automated trading has replaced the rest. But Goldman has hired 200 well-compensated computer engineers to support its automated trading operations. In other words, code only partially substitutes for human capabilities. As the economic power of code grows, the economic power of human capability shrinks for some forms of work and grows for others.

As code evolves, so does work — and sometimes, the jobs attached to the old versions of work cease to exist.

To whom does power accrue in the code economy? It turns out the hierarchy of the code economy pretty closely resembles that of the industrial economy. “Those who author, store, and enforce code by definition have more power than those who execute code; those who execute code in turn generally fare better than those who are excluded from code,” explains Auerswald. “For this reason, people who have the opportunity and the capacity to keep up with the advance of code have a greater opportunity to create and contribute to society than those who do not.”

Those who control code are not the only beneficiaries of code. Auerswald reports that code has an effect on markets that is consistent, predictable, and intriguing. “The creation of a new high-volume, low-price option creates a new market for the low-volume, high-price option,” he writes. “Every time this happens, the creation of new value through improved code forces a bifurcation of markets, and of work.”

Auerswald points to Shinola, a six-year-old company based in Detroit that takes its name from the old shoe polish brand, as an example of this bifurcation in action. Factories, powered by code, produce inexpensive, highly reliable quartz watches and, now, smart watches. But Shinola has found a niche making hand-assembled, high-end watches from Swiss parts. “It turns out,” writes the author, “that the highest quality handmade watches are more valued than ever — as is the craftsmanship of the most capable watchmakers and designers who produce those watches.”

Additional examples abound. Digital technologies enable us to watch a new movie on our smartphone for a few dollars, yet we still shell out four or five times as much to sit in a movie theater. We can download a song for a dollar and see our favorite musicians perform at no cost on YouTube, but we still pay hundreds of dollars for concert tickets. Any one of us can hang a high-quality digital reproduction of a Van Gogh or a Pollock painting in our home, but the prices of original works of art still soar.

In other words, if you don’t see a place for yourself in the code economy, don’t despair. “To be human is to think critically. To collaborate. To communicate. To be creative,” concludes Auerswald. Humans will always be better than machines at one thing — being human.