Jeremy Rifkin’s controversial prognostications on topics such as beef, biotechnology, and business have been sparking debate for at least 40 years. Who knows how far back they go? I picture a family dinner at the Rifkin home circa 1955: Jeremy’s dad, Milton (a manufacturer of plastic bags) is sitting at the head of table, his forkful of pot roast frozen midair, as his 10-year-old son tells him that the family business is going to destroy capitalism. 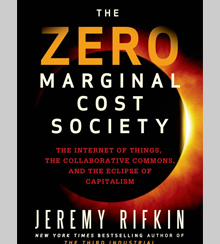 Rifkin the Younger’s new book, The Zero Marginal Cost Society: The Internet of Things, the Collaborative Commons, and the Eclipse of Capitalism (Palgrave MacMillan, 2014), weaves together many of the threads he has pulled out over the years. It is the futurist’s most comprehensive inquiry into business and work yet, and it is built on a thesis that we’ve heard before: Capitalism is tottering and will not last out this century, a victim of “the dramatic success of the very operating assumptions that govern it.” Rifkin says that capitalism’s downfall is inevitable because of its ceaseless quest for productivity and the ever-growing sophistication and power of digital technology. The collision of these two forces is driving down the marginal cost of producing additional units of anything and everything to near zero, a process that will squeeze profits until they scream. (You can hear the argument in more detail here.)

This driving down of marginal cost includes the cost of human labor. Reprising the theme of his book, The End of Work: The Decline of the Global Labor Force and the Dawn of the Post-Market Era (Tarcher/Putnam, 1995), Rifkin explains that digitization is replacing jobs. This creates a situation that economists once assumed could not happen: Productivity will rise, but employment will fall.

Twenty years ago, Rifkin’s argument was tinged with foreboding: How, after all, would people survive without jobs? But in The Zero Marginal Cost Society, he is far more optimistic. When I asked him why, he said, “There are a few reasons that I am more optimistic today than I was in 1995. First, the nonprofit sector—the social commons—has been growing even faster than I had envisioned. Between 2000 and 2010, after adjusting for inflation, nonprofit revenues in the U.S. grew by a striking 41 percent, more than double the growth in GDP, which increased by only 16.4 percent.

“The nonprofit community is also the fastest-growing employment sector, outstripping both the government and private sectors in many countries. There are currently 56 million workers employed in the nonprofit sector in 42 countries, and in many of the most advanced industrial countries—including the United States, the United Kingdom, and Canada—employment in this sector now exceeds 10 percent of the workforce, and its trajectory has been rising year over year since 1995. During the Great Recession (2007–09), the nonprofit sector gained jobs at an average rate of 1.9 percent annually, while the private sector lost jobs at a rate of 3.7 percent.

“The nonprofit community is the fastest-growing employment sector in many countries.”

“Second, the creation of social enterprises, some 35 percent of them nonprofits, has mushroomed in recent years thanks to a new generation of entrepreneurs. There are several hundred thousand social enterprises in the United States that employ over 10 million people and that have revenues of US$500 billion per year. These enterprises represented approximately 3.5 percent of the nation’s GDP in 2012.

“Third, what makes the social commons more relevant today than at any other time in its long history is that we are now erecting a high-tech global technology platform—the Internet of Things (IoT)—whose defining characteristics could support and nurture it. The IoT facilitates collaboration and the search for synergies, making it an ideal technological framework for advancing the social economy. Its operating logic optimizes lateral peer production, universal access, and inclusion, and its purpose is to encourage a sharing culture. The IoT will bring the social commons out of the shadows, giving it a high-tech platform to become the dominant economic paradigm of the 21st century.”