The Secret of Our Success: How Culture Is Driving Human Evolution, Domesticating Our Species, and Making Us Smarter

What’s the secret of our evolutionary and ecological success? Not only is Homo sapiens the most advanced species on Earth, but the species is capable of surviving and thriving in a wide range of environments. The orthodox answer is that we are a species in which a process of genetic evolution over millions of years — random mutations and selection — has produced large brains that make us smarter than other animals. We also have more cooperative instincts, which make us the most social of creatures.

But although the evolutionary process that produced life on Earth has lasted billions of years, it is only the last 10,000 to 100,000 years (depending on who you listen to) that have produced an explosion of creativity and innovation. This quantum leap came when genetic evolution slowed or even stopped, and cultural evolution took over. Culture sits upon a foundation of genetics and biology but is separate from it. 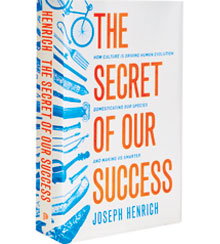 Joseph Henrich wants to upend this conventional narrative. A professor of evolutionary biology at Harvard University, he also holds the Canada Research Chair in Culture, Cognition and Coevolution at the University of British Columbia. In The Secret of Our Success, he contends that cultural evolution, which intertwines with genetic and biological changes, is a much larger, longer-acting, and more central component of our development than most people think. He casts a wide net for evidence: a detailed reexamination of the historical record, mathematical models, computer simulations, and laboratory experiments with both humans and primates.

And it is clear he is on to something. Many aspects of our physiology are baffling unless you understand them as responses to cultural factors. Human digestive systems are very different from those of other primates. We have tiny mouths, weak jaws, and small stomachs. Our bodies don’t detoxify wild foods well. This setup works only in situations where parts of the digestive function have been “externalized” to a culture of food preparation. In other words, slicing, dicing, crushing, and cooking allowed us to, in effect, outsource digestion and focus on our core competency — building large brains to become a new kind of domesticated animal that specialized in living together in large groups and learning from one another.

Many aspects of our physiology are baffling unless you understand them as responses to cultural factors.

There is evidence that this process began more than 3 million years ago, and accelerated a million years later as our evolutionary ancestors transitioned from Australopithecus to the first species of the Homo genus, Homo erectus. At this time we find indications of substantial food processing and tools that could cut grass and saw wood. As our ancestors’ brains grew larger to specialize in the acquisition, organization, and transmission of culture, the progress was not always smooth or accumulative. Innovations can be lost, especially when groups become isolated from one another. At times our ancestors appeared to be “dancing on the threshold” of what the author calls an evolutionary Rubicon — a barrier crossed only by outlaws or outliers, whose crossing changes everything.

At a certain point in history, human culture started to exert its own selection pressures on the evolutionary process. For instance, blue eyes are common only in a region around the Baltic Sea in Europe. Why? Well, the author writes, 6,000 to 10,000 years ago, a group of cereal crops proved adaptable to the region. High consumption of cereals can lead to a vitamin D deficiency unless the body can synthesize the vitamin from sunlight. In the high latitudes, this favors a light skin. And the complex process that suppresses melanin in the skin also does so in the iris of the eye. In other words, a step forward in cultural evolution — figuring out how to grow grains in a particular climate — led to biological and genetic changes.

Culture can affect our preferences, helping us select partners as well as goods of all kinds. In taste tests, novice wine drinkers typically say they prefer cheaper wines — and brain scans indicate the enjoyment is real. It is only after people take courses in wine appreciation that their pleasure centers start showing greater response to the more expensive vintages. When we move into novel environments, culture can make the difference between life and death. Henrich illustrates this feature with fascinating tales from the “Lost European Explorer Files.” We learn, for example, how all 129 members of the 19th-century Franklin expedition, who hailed from Great Britain, perished in the Arctic, despite being in a region where humans had lived for 30,000 years or more. The explorers were equipped with big modern brains and the latest technology but lacked the fine-grained, situation-specific cultural knowledge that enabled the local Inuit to thrive.

For a culture to make continual progress, it needs to employ widespread experimentation and develop a method of selecting which tools and processes to keep and which ones to discard. People pay attention to whoever seems competent, successful, or prestigious. Henrich argues that at the same time, people are wary of manipulators and may look for what he calls credibility-enhancing displays (CREDs), actions that a person would be unlikely to perform if he or she did not believe his or her stated beliefs. And when it is unclear which of these displays are responsible for their success, people will copy all of them. The result is that great expertise in one area may generalize into others and, in the age of the Internet, some people may become famous for being famous. (It turns out there may be an evolutionary argument for the existence of the Kardashians.)

The implications of this new, continuing narrative for the way we think about people, societies, and even companies are both subtle and significant. The hidden hand of culture is as powerful as that of any market, and evidence shows synergies, not trade-offs, between profitability and social concerns. It seems that humans are bad at intentionally designing effective institutions and organizations. They would be better advised to mimic evolution and develop “variation and selection” systems, dumping the losers from the portfolio and keeping the winners, without ever losing touch with culture and context. Perhaps such dynamics are the secret of success for both capitalism and democracy. But nothing lasts forever. We should bear in mind, as Henrich remarks in a slightly cryptic aside, “over time, history suggests that all prosocial institutions age and eventually collapse at the hands of self-interest, unless they are renewed by the dynamics of intergroup competition.” That too sounds like a new take on an old story.