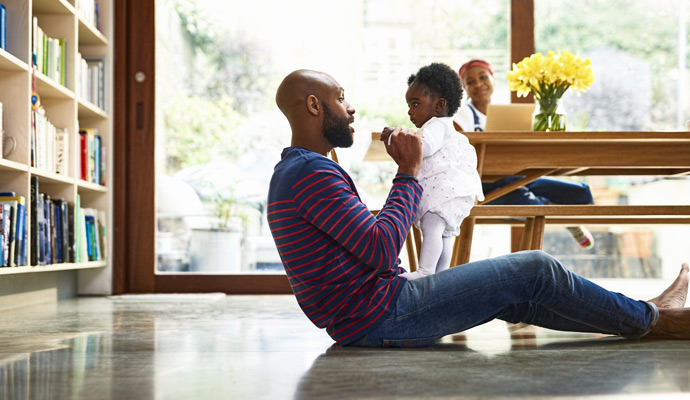 At a global event for a giant corporation, a top official came up to me. He wanted to discuss work–life balance initiatives, which are a crucial part of building gender equality. “It’s something we take seriously,” he said. “We have maternity leave and offer women the chance to go part-time if they’d like.”

I have similar conversations with executives all the time, in the United States and around the world.

There’s no question that corporate America — and companies everywhere — need to do a better job at putting policies in place that enable and empower women to achieve their professional goals, and that help them manage the shifting responsibilities of career, parenting, and caregiving to all family members. But focusing solely on policies aimed at women perpetuates outdated norms and stereotypes that ultimately inhibit greater equality in the workforce, and in society.

In fact, paternity leave and work–life balance programs aimed specifically at men are a necessary step in this journey. Until men have equal opportunities to be caregivers, and until companies regard men as equally responsible for caregiving, most families will be left with no choice: The bulk of caregiving responsibilities will fall to women. And they’ll spend less time at work and more time at home, which can inhibit professional growth.

This is the other half of what it takes to create a level playing field for women and men at work. But it remains largely unknown.

When I was on air at CNN, I’d sometimes break from fact-checking politicians to cover other topics, including fatherhood. And when I shared the findings, such as a study indicating that “Almost all fathers who live with their children take an active role in their day-to-day lives through activities such as sharing meals, helping with homework, and playing,” the responses were overwhelming. Viewers and readers had no idea.

Then I launched a legal battle against my employer for fair parental leave, which got a great deal of attention. In the end, the company revolutionized its policies. It was a win-win. I wrote a book, All In, about these issues. Now, I travel the world working with businesses and organizations on making work–life balance initiatives equally available to men.

In recent years, some high-profile companies, including Netflix, Microsoft, and Amazon, have announced plans to create or expand paternity leave. Still, the Society for Human Resource Management reports that only 29 percent (pdf) of organizations offer it at all. (By contrast, about 58 percent of companies offer some paid maternity leave, according to the Society’s National Study of Employers [pdf]. Usually this is paid through disability leave.)

But even in the minority of instances in which paternity leave and flexible schedules are available, stigmas and entrenched cultures often prevent men from using them. My book is filled with stories of men who were fired, demoted, or lost job opportunities for taking advantage of a benefit that was offered to employees. They were told these benefits existed only “on paper” to make the company look good — not to actually be used. One man was told he could not have the time off he was legally entitled to, because only women are supposed to care for babies unless they are “in a coma or dead.”

One man was told he could not have the time off he was legally entitled to, because only women are supposed to care for babies unless they are “in a coma or dead.”

In a survey by Dove Men+Care (I partner with Dove on initiatives surveying and supporting modern dads), 73 percent of fathers said there’s little workplace support for them, and 21 percent said they feared losing their job if they took the full paternity leave available. This, of course, is a prospect women constantly fear. According to a PwC survey (pdf), 48 percent of new mothers said they were overlooked for advancement because they had children, and 42 percent said they were nervous about what having a child would do to their careers.

Over the years, a series of damaging stereotypes has taken hold in our culture, suggesting that fathers are not interested in being involved in the lives of their families and kids. But in a 2016 survey, PwC found (pdf) that 54 percent of men said work–life balance is very important to them. That was lower than the 64 percent of women who responded in the affirmative to the same question, but not dramatically so.

First, at the national level, laws that mandate paid family leave would be enormously helpful. In 1993, the United States passed the Family and Medical Leave Act, which guarantees men and women the right to take up to 12 weeks of unpaid leave. But it doesn’t apply to about 40 percent (pdf) of workers, and millions of people can’t afford (pdf) unpaid leave. The U.S. is the only developed nation — almost the only nation at all — to lack paid maternity leave. As I explained a couple of years ago at the United Nations, this is based on a sexist idea straight out of the Mad Men era: that women don’t need pay because men make all the money.

One way to improve the situation would be for the U.S. to establish national paid family leave insurance, similar to what has worked successfully in several states (pdf), from New York to the State of Washington. Workers make small contributions to a fund, then receive pay when they need it to care for a loved one or recover from an illness. A study of California’s pioneering paid family leave program (pdf) found that employers were generally positive about its effects, and more men were taking leave because their families could afford it.

In the private sector, it would be enormously impactful if paternity leave would become the norm in corporations large and small. Dove Men+Care has announced a Pledge for Paternity Leave, calling on fathers to take the full leave available, everyone else to serve as allies, and business leaders to make paternity leave both available and safe to take. And making greater use of the standard tool kit for work–life balance — including flexible scheduling, work-from-home opportunities, and subsidized child care — would help companies attract and retain women and men alike.

But one of the most important things leaders and employees can do is communicate about issues of work–life integration in ways that help remove some of their stigma. I’ve seen what a difference this makes.

At a workshop for a federal agency, a top official shared that both he and his wife work full-time, and they have a child with special needs who requires weekly doctor’s appointments. People who had worked with this man for a decade told me they had no idea of the challenge his family was facing. After another workshop at an energy company, one participant became the first male member of the work–life balance resource group. Since then, people at each of these organizations have reported constructive improvements in building work–life balance and greater gender equality.

When this issue is moved out of the shadows and into the open, terrific changes can follow.