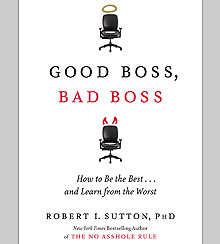 When I think about the best bosses, I think of pride-builders. Pride-builders are experts at engaging the emotional commitment of employees. They do this with a laser-like focus on making their people feel good about the work they have to do — whatever it may be — and take pride in giving their personal best every day.

In the excerpt below, Robert Sutton reminds us that there are important emotional and informal elements to leading people, and that some leadership qualities are more important than others in this regard. One of the more telling qualities, he says, is an acute sense of self-awareness. This is certainly true for pride-builders. If they didn’t understand how others perceived and responded to them, they could not hope to frame their actions in ways that motivate and energize their followers emotionally as well as rationally.

Excerpted from Chapter 9 of Good Boss, Bad Boss:
How to Be the Best…and Learn from the Worst

Last year, I led a workshop at Stanford on being a good boss during tough times. As we walked to lunch afterwards, a manager from the session told me about his boss. A few weeks earlier, a secretary in his office walked up to this vice-president and asked, “When are the layoffs coming?” The boss was stunned. He had no clue how she discovered big cuts were in the offing: the decision had just been made and extreme care had been taken to keep it under wraps. When the bewildered VP asked how she knew, the secretary answered that when bad news was coming, he couldn’t bring himself to look his people in the eye. This VP had what poker players call a “tell,” a habit or quirk that revealed when he was hiding something (bad news in this case). The codeword among his charges was, “The boss is wearing interesting shoes today.”

The “interesting shoes” story reflects a pervasive theme…that…distinguishes the best from the worst bosses: If you are a boss, your success depends on staying in tune with how others think, feel, and react to you. Bosses who persistently promote performance and humanity devote considerable energy to reading and responding to followers’ feelings and actions, and those of other key players like superiors, peers, and customers. Of course, there is no single magical or simple thing that defines a great boss…anyone who promises you an easy or instant pathway to success is ignorant or dishonest, or both. The moves that great bosses make are too complex, varied, messy, and unpredictable to be captured by any single theme, slogan, or set of steps.

Yet some skills and aspirations are more important than others. Developing and sustaining self-awareness ought to be at the top of the list for every boss. David Dunning of Cornell University shows that a hallmark of poor performers is they lack self-awareness, consistently overestimating their skills in just about any task that requires intellectual and social skills, such as debating, having a sense of humor, or interviewing others. In contrast, Dunning finds that self-awareness is a hallmark of the best performers — they are especially cognizant of their strengths and weaknesses, and fret about overcoming pitfalls that can undermine their performance. When it comes to bosses, one implication is the best might laugh at the VP in the “interesting shoes” story. But they also realize that they could easily be that guy — that every boss is prone to bouts of cluelessness and to forgetting how closely followers track every little thing they do. The best bosses reduce the risk of self-delusion by seeking and responding to hints and hard data about how others read their moods and moves. They urge followers to challenge them with enlightening — and disconcerting — questions, like when the VP’s secretary asked, “When are the layoffs coming?” They want their followers (and bosses, peers, and customers, too) to keep feeding them such information, no matter how unpleasant and unflattering, because they are obsessed with how their words and deeds are interpreted by others.

The upshot is, to be a great boss, you’ve got to think and act as if “it is all about you.” Your success depends on being fixated on yourself. On the surface, this conclusion clashes with advice from many gurus and experts. Former GE CEO Jack Welch and Stanford’s Robert Joss (dean of the Graduate School of Business for a decade), for example, implore managers, “It’s not about you.” I agree with the spirit of this advice, as the aim is to discourage bosses from falling prey to their most selfish and destructive instincts. Yet I question the words because most bosses, like most human beings, are remarkably self-obsessed — and that isn’t necessarily a bad thing. Yes, the worst are selfish, are oblivious to their charges, and cling to dangerous delusions about their magnificent leadership skills. The best are equally self-obsessed, but have different motivations. Their obsession isn’t for egotistical or for selfish reasons. On the contrary, they focus on controlling their moods and moves, accurately interpreting their impact on others, and making adjustments on the fly because they want their people to produce work that others will admire — and to feel respect and dignity along the way.

Copyright © 2010 by Robert Sutton. Reprinted by permission of Business Plus, an imprint of Hachette Book Group Inc. All rights reserved.