The attractions of the mobile phone–based Internet are many: surfing the Web from anywhere, e-mail on the move, location-based services, GPS, mobile e-commerce, portable software, videos on cell phones, and even a substitute for fixed-line connections. And consumers have responded accordingly. Since the third generation of telecommunications standards (3G), which offers wider and higher-quality mobile network capacity, was introduced in 2003, global data traffic over mobile networks has increased roughly 20-fold. Moreover, with the advent of data-heavy mobile applications, such as video-on-demand, those numbers are expected to explode again in the very near future.

Anticipating added demand, many mobile carriers are eyeing a new network technology to supersede 3G. Termed LTE, or long-term evolution, this planned network is expected to be available in 2010 and will provide significantly more capacity at far less cost. To explore why LTE is the best fourth-generation mobile solution — and a host of related questions — strategy+business turned to Peter Weichsel, a Booz & Company partner and technology expert in the firm’s Düsseldorf office.

S+B: Apparently the dawn of the 4G age is already upon us. Why must we make the transition from 3G so soon?
WEICHSEL: The answer lies where increasing demand meets network capacity and performance. Customers of 3G have finally begun to appreciate the many virtues of the mobile Internet — the availability of all kinds of information at their fingertips, wherever they are, not to mention the latest applications such as video-on-demand. That level of convenience explains why those customers are turning to wireless networks as a complement to or even a substitute for their fixed-line connections, not just for voice communications but for broadband access as well. Simultaneously, fierce competition is driving down the price of mobile data. In some markets, data packages are already competitive with fixed broadband monthly contracts.

Meanwhile, the typical European network carrier still has plenty of capacity on its networks, but it will see its traffic grow 10-fold in just the next three years. In one sense, of course, that’s a good thing. The problem is that simply adding capacity to the current 3G networks is very expensive and even today does not always allow carriers to lower prices to the level demanded by the current competition in the market. It isn’t just a matter of the telecoms upgrading the existing mobile base stations; they also have to find new locations for additional mobile base stations, which means acquiring new sites, getting the equipment installed, and setting up the link to their core networks. All in all, merely adding capacity is too expensive to allow carriers to remain competitive, given the constantly rising expectations of customers for increasing data rates at the same constant price of fixed-line rates.

That’s the great virtue of LTE: LTE networks are about four times more efficient than 3G networks, so they can offer both more capacity and much higher data rates at the same or lower cost — or offer similar data volumes at a much lower cost.

S+B: Do telecom carriers have choices in making the switch to the fourth generation?
WEICHSEL: Today, the issue is no longer which technology to use, but rather when to make the switch. The technology most commonly cited as LTE’s chief competition is WiMAX, which has been in the market for quite some time but has had serious reliability issues and hasn’t gained any real traction. LTE offers better performance than WiMAX, a smooth upgrade path for most existing carriers, and it can be used for both voice and data, whereas WiMAX was designed primarily as a data network.

S+B: The switch to 3G was pretty bumpy — costs were high, the handsets were disappointing, and consumers were confused about what they were getting. What lessons have been learned from that transition?
WEICHSEL: The biggest problem with 3G was that operators making the switch didn’t know what customers would use it for. Defined initially as the future of mobile data, it emerged merely as a cost improvement option for wireless voice. Since then, however, people have grown used to having Internet-on-the-go. They want to be able to use it everywhere, and they expect the same performance they get at home. Look at how successful the iPhone, which can use 3G, has been, and the strong debut of the Google G1 phone.

From a customer perspective, there is no immediate need for LTE. Most customers would be happy with the performance of 3G for the foreseeable future. Most emerging services, even high-bandwidth services such as access to YouTube, work well with 3G. However, 3G capacity is just too expensive, given the data volumes we expect soon, and customers simply aren’t willing to incur increases in their data costs. LTE usage will be driven at first by high-end data customers using data cards and devices such as LTE-enabled netbooks. We also expect that LTE network equipment will be much more mature than comparable 3G equipment was, thanks to its similarity with the current 3G architecture.

S+B: Will the transition to 4G happen around the world simultaneously, or are European telecoms going to go in that direction first?
WEICHSEL: LTE will be driven by carriers that already have the highest level of data traffic in their network. European carriers will certainly be at the forefront of the transition, with LTE networks becoming available as early as 2010. But Verizon, the largest mobile operator in the U.S., announced in February 2009 that it also plans to switch to LTE as early as next year, and that should give LTE a huge boost. Japan’s NTT DoCoMo and China Mobile have also announced plans to join the LTE bandwagon in 2010 or shortly after. Carriers in most developing countries have yet to deploy 3G networks — or are just about to begin the migration, so they will probably move to LTE perhaps five years later than European and U.S. telecoms. Some will probably just skip 3G altogether and move directly to LTE.

S+B: This sounds like it’s going to be an expensive transition. How much will it cost, and how will telecoms pay for it?
WEICHSEL: Ultimately, every base station can be upgraded to LTE. Even if we’re looking at several hundred million euros for the average European operator, this is still primarily an upgrade of existing radio sites. The payback will come through LTE’s increased efficiency: With LTE’s lower cost structure, carriers will be able to offer mobile broadband access at attractive prices that can compete with entry-level fixed-line offerings. The risk? Operators that make the switch too early may find themselves paying a premium for capacity they might not need yet. But operators that wait to make the transition may find themselves losing out to competitors that move more quickly, offering better service at lower prices. 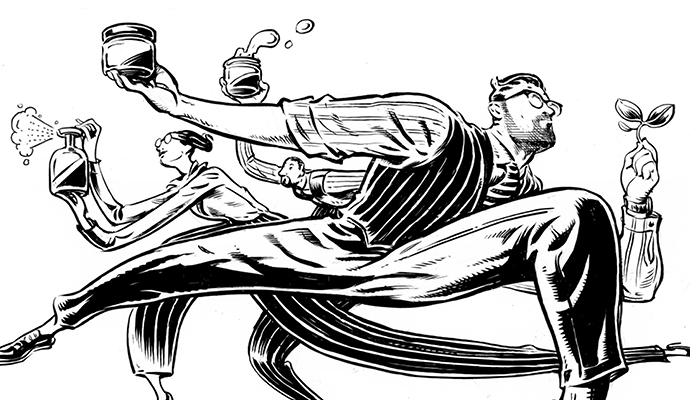 How organizations can design for agility and embrace uncertainty
Clarins Group’s organizational experiment during the pandemic shows how a large company adapts and becomes more flexible when it matters most.
by Stéphane JG Girod and Martin Králik
Digital issue