Adam Smith’s use of the metaphor “an invisible hand” to suggest that the individual pursuit of self-interest could also benefit society as a whole has been embraced as a rationale for unfettered capitalism. But the theory has come under fire in recent years. For one thing, it’s hard to find the societal silver lining in cases like the abuse of subprime mortgage–backed derivatives, which led to the Great Recession. 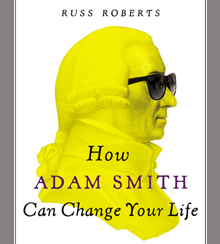 Before we ride the father of modern economics out of town on a rail, however, we should acknowledge that our current interpretation of his metaphor is an exaggerated one. Smith briefly mentioned an invisible hand only three times in his published works and only once in his 1776 economics classic An Inquiry into the Nature and Causes of the Wealth of Nations—and never did he imbue it with the economic heft it has taken on in the past century or so. We’ve also separated the invisible hand from another essential Smithian metaphor: “the impartial spectator.”

If, like me, you haven’t heard of the impartial spectator, you might find Russ Roberts’s How Adam Smith Can Change Your Life: An Unexpected Guide to Human Nature and Happiness (Portfolio, 2014) enlightening. In it, Roberts, an economist at Stanford University’s Hoover Institution, explores Adam Smith’s other big book, The Theory of Moral Sentiments, which Smith published in 1759 (17 years before The Wealth of Nations) and then substantially revised in 1790, the year he died.

The Theory of Moral Sentiments isn’t about economics. It is, Roberts says, a “road map to happiness, goodness, and self-knowledge.” He explains that while Smith acknowledges that we humans are essentially self-interested, he also says there’s more to us than that. Consider the first sentence in Smith’s book:

How selfish soever man may be supposed, there are evidently some principles in his nature, which interest him in the fortunes of others, and render their happiness necessary to him, though he derives nothing from it except the pleasure of seeing it.

While we humans are essentially self-interested, there’s more to us than that.

Further, Roberts explains, Smith argued that there are internal governors of our natural self-interest that stop us from doing harm to others: “Smith’s answer is that our behavior is driven by an imaginary interaction with what he calls the impartial spectator—a figure we imagine whom we converse with in some virtual sense, an impartial, objective figure who sees the morality of our actions clearly. It is this figure we answer to when we consider what is moral or right.”

Roberts goes on to tell us that Smith saw the impartial spectator as neither god nor government. In the fashion of the Enlightenment, Smith believed the impartial spectator to be an internalized representative of our collective humanity—“reason, principle, conscience, the inhabitant of the breast, the man within, the great judge and arbiter of our conduct.” Smith continues:

Good stuff, but perhaps it’s a bit too easy to dismiss as classical claptrap. Maybe that’s why so many of us know about Smith’s invisible hand and so few of us know about his impartial spectator. But I know about both now, and I wonder if the former can operate properly without the latter. In other words, is it possible that the benefits of the invisible hand can be realized only in conjunction with the guiding hand of the impartial spectator?

Perhaps the abuse of mortgage-backed collateralized debt obligations (CDOs), as just one of many examples of market failures, was a direct result of the mechanism of the invisible hand operating without regard for the impartial spectator. If mortgage officers had been listening to their impartial spectators, would they have encouraged home buyers to sign for loans they clearly could not service? Would market makers have flogged CDOs that they knew were fatally flawed? Thanks to Russ Roberts, I’m pretty sure how Adam Smith would have answered these questions.