In the world of industrial design, 46-year-old Jony Ive is a star. He even received a knighthood for his services to “design and enterprise” in 2012. And he certainly deserves the accolades: As the design chief at Apple, he was instrumental in creating the iMac, iPod, iPad, and iPhone. 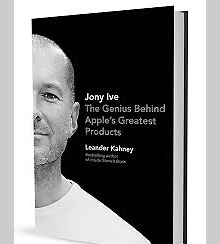 That in itself is a good reason to read Jony Ive: The Genius Behind Apple’s Greatest Products  (Portfolio, 2013), by Leander Kahney. But corporate leaders may find the back story more valuable than the designer’s life story. That’s because starting in chapter four, as Ive moves to California to work for Apple, the book’s backdrop becomes the development and evolution of what is arguably the company’s most valuable asset: its strategic capability for design.

In its early years, Apple didn’t have a design capability: Steve Jobs worked with external designers, most notably Harmut Esslinger, whose book about their collaboration is due in January. But after Jobs was pushed out of the company in 1985, and the cost of working with outsiders became onerous, Apple realized that it needed its own design team.

In 1990, the company hired Robert Brunner to build it. Brunner recruited a world-class team, including Ive, and built a studio to house the new industrial design group (IDg). IDg turned out award-winning products, such as the Newton, but industrial design at Apple was a capability with a small “c.” The efforts of the highly talented design team were dispersed among unrelated projects; the function had to compete with other functions, such as engineering; the team was forced to dilute the elegance of its designs for manufacturing and cost considerations; and design was not the principal focus of the company’s leaders. So as the company struggled to maintain its footing through the missteps of several post-Jobs leadership regimes, the design team threatened to come apart. Indeed, Brunner himself left the company in frustration in 1996 and Ive took over as head of IDg.

It’s likely that design would have never become a strategic capability at Apple if Jobs hadn’t returned to the company in 1997. As Walter Isaacson so ably described in his widely acclaimed biography Steve Jobs (Simon & Schuster, 2011), Jobs made industrial design a strategic priority and he latched onto the innovative work being produced in IDg. It was Jobs who gave Ive and his team the authority to produce their designs without making tradeoffs. If anything, when it came to the integrity and elegant simplicity of design, Jobs was more demanding and unyielding than the designers themselves. The result was a run of groundbreaking, market-creating products that have made Apple one of the world’s most valuable brands.

Many companies would like to develop an Apple-like capability for design, and every company needs some kind of differentiating capabilities. What the backstory in Kahney’s biography of Ive reveals is that creating such a capability is easier said than done. It requires investment in talent and technology . Most of all, it requires leaders who will consistently prioritize and support the capability over the long haul.

Creating a differentiating capability requires investment in talent and tech, and a leader’s support.

There is no doubt that Apple has built a strategic capability for design. And thus far, it appears that Tim Cook is as committed as Steve Jobs was to maintaining it. But it remains to be seen how unwavering that commitment will be if Apple’s fortunes flag or when the company’s leadership team changes.