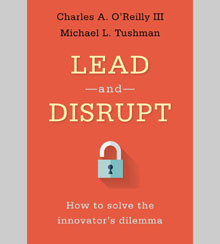 A few pages into Lead and Disrupt: How to Solve the Innovator’s Dilemma (Stanford University Press, 2016), business professors Charles A. O’Reilly III and Michael L. Tushman present two lists of companies. At first glance, there doesn’t seem to be too much difference between them. Each features 27 companies, most with familiar names and long histories, such as GM, Siemens, and Lego.

The second list includes some dead companies — such as Circuit City and Bethlehem Steel — and some companies that are shadows of their former selves, such as RadioShack. But the histories of the companies on the first list reveal that many of them have experienced their fair share of hard times, too. For example, the French media conglomerate Vivendi endured a period of turmoil after a series of aggressive acquisitions in the late 1990s.

Nevertheless, O’Reilly, the Frank E. Buck Professor of Management at Stanford’s Graduate School of Business, and Tushman, the Paul R. Lawrence MBA Class of 1942 Professor of Business Administration at Harvard Business School, see a clear difference in the success of the companies on the two lists. And they peg leadership as its source.

The companies on the first list, they contend, “had ambidextrous leaders who were able and willing to exploit existing assets and capabilities in mature businesses and, when needed, reconfigure these to develop new strengths.” The companies on the second list were not so lucky. Their leaders, say the authors, “were rigid in one way or another — unable or unwilling to sense new opportunities and to reconfigure the firm’s assets in ways that permitted the company to continue to survive and prosper.”

Putting the support for that contention aside, ambidextrous leadership is a beguiling concept. Maybe RadioShack and Circuit City would still be leading electronics today if, decades ago, their leaders had asked the question that O’Reilly and Tushman say all ambidextrous leaders ask: “How can we both exploit existing assets and capabilities by getting more efficient and provide for sufficient exploration so that we are not rendered irrelevant by changes in markets and technologies?”

As the book’s subtitle suggests, ambidexterity also might offer a solution to Clayton M. Christensen’s innovator’s dilemma, as well as to the challenge of simultaneously addressing the conflicting dictates of exploitation and exploration (pdf) posed by Stanford organizational expert James G. March. Perhaps an incumbent company won’t get caught flat-footed by a new player using a technology that’s barely created a blip in the marketplace if it’s already trying to figure out how to put that technology to work. Further, the ambidextrous incumbent might have an advantaged position with regard to resources. After all, it has a core business that can fund and staff its efforts, while a new player has to scare up external financing/bootstrap its way to scale.

The challenge, of course, is transforming the concept of ambidexterity into an organizational capability. And here, O’Reilly and Tushman provide some nuts-and-bolts advice. Structurally, they call for: a clear strategic intent that identifies and embraces both exploitation and exploration opportunities; the funding and nurturing of new ventures by senior management; a separation between existing and new businesses; and the vision, values, and culture that support “a common identity between the explore-and-exploit units.”

The authors also define leadership principles that support ambidexterity. Senior leadership teams need to have a shared strategic aspiration that unites them in the pursuit of exploitation and exploration opportunities. They need to set a strategic balance between these inherently conflicting efforts, and then cope with tensions that arise from the conflict between them without losing that balance. They need to evaluate and judge exploitation and exploration efforts differently, which will require them to be inconsistent in their actions across units. Finally, they need to allocate the dedicated blocks of their time to work on the individual units.

O’Reilly and Tushman’s practical recommendations are the best reason to read Lead and Disrupt, even though their case for ambidexterity as the Holy Grail of corporate longevity is not entirely convincing. But if you are trying to patch the holes that sink corporate ships, ambidexterity seems like a good attribute to have. When the situation calls for all hands on deck, it’s helpful to have both left and right hands working.