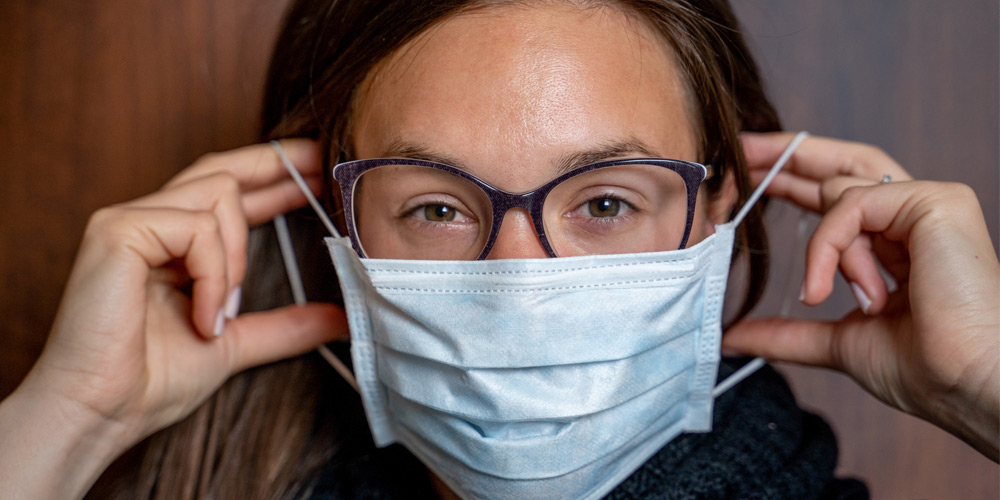 Using a beer can, a measuring tape, spray cans full of starter fluid, and Styrofoam mannequin heads, the YouTube personality Uncle Rob made a popular video illustrating the power of face masks to stop aerosol spray at various distances.

The video is my hands-down favorite among the wide range of messaging tools individuals and organizations have used to persuade people to take steps to reduce risks to themselves and others amid COVID-19. A close second would be the widely shared “Stay Home, Save Lives” memes that my fellow Chicagoans made using a cardboard cutout of our mayor with a stern look on her face. Both use creativity and a generous dose of humor.

More pedestrian but equally important examples are the graphics showing how (and how not) to wear a mask, and color-coded maps of states showing progress controlling the disease. The World Health Organization produced a series of infographics to combat an “infodemic” of false information about the effectiveness of, say, garlic, sesame oil, hot pepper, and hot baths as COVID preventatives. Notably, it presented the facts in larger fonts than the myths.

COVID-19 messaging provides an object lesson in how — and how not — to communicate in a way that gets people to recognize the nature of a threat and to act in ways that reduce risks to themselves and others.

It’s been widely recognized, for example, that public health officials in many countries made a serious misstep early on in the pandemic when, amid a shortage of personal protective equipment for medical professionals, they discouraged people from wearing face masks. Although the intention was admirable — to reserve the limited supply for people putting their lives on the line to help others — the message created a perception for many people that they didn’t need masks. That communication error made it harder to convince people to wear them later on, when they were found to be an important defense.

Obviously, it’s important to share information that is as accurate as possible, to correct information that turns out to be wrong, and to be clear about what you know and what you don’t know. But there are other important lessons we can learn from effective communication about health risks that can be applied to communicating about other types of risk. Three key examples are discussed below.

It’s important not to minimize the problem. Researchers from the University of Connecticut and Zhejiang University in China found that a challenge for risk communications is to correct for optimism bias — people’s tendency to see things as rosier than they are in reality and thus to minimize or ignore risks.

But the opposite also is a problem for effective risk messaging.

Good risk communication is all about telling stories that are neither so frightening as to turn people off, nor so weak as to make them complacent, Emilio Mordini, an Italian psychiatrist who specializes in risk communications, told me.

Mordini gives Uncle Rob’s video high marks for the way it presents a compelling narrative that balances fear and courage through its depiction of the virus as flaming breath, evoking a knight battling a dragon. “Paradoxically, it is not scary. It is reassuring because it is a fairy tale,” he told me.

Visual imagery plays an important part in setting the tone. For example, a novel coronavirus particle looks like a naval mine — a weapon that unconsciously evokes conspiracy theories — whereas the Ebola virus resembles a deadly coral snake. Mordini worries that these visual associations could trigger fear and denial reactions.

The same information can come across very differently depending on the images and narratives used. “In Germany, media reported news about dogs sniffing for COVID with very different pictures. One showed police with uniforms and goggles covering their eyes. Others just used a nice picture of a dog with a splendid nose,” Mordini said. “They both told the truth — but one was terrorizing, and one was reassuring.”

Although it is important not to give the impression that there is no risk at all, overplaying the risk can backfire, especially because people who deny that a danger exists often do so because they are even more frightened than the people who acknowledge it. “When people are in denial, you can’t communicate by increasing fear, because that increases denial. The more you push on fear, the more people deny, and the more they deny, the more dangerous it is,” Mordini said.

That unconscious response may be part of why even when people believe that a risk is high, they don’t always make good decisions about how to reduce that risk for themselves and others.

The odds of catching the virus, getting sick, and dying vary widely depending on risk factors and behaviors. But as a ballpark figure, in late June in the United States, about 3 percent of confirmed cases resulted in deaths. Because not everyone is tested or even shows symptoms, the number of actual cases may be 10 times as high as those reported — which would mean the case fatality rate is actually 0.3 percent.

Despite overestimating the personal risk, survey participants did not always wear masks, stay at home, or practice social distancing. Reported risk-reducing behaviors differed wildly by location. In Massachusetts, for example, 85 percent of respondents said they always wore a mask in indoor public spaces, compared to just 52 percent in Iowa. Some of those differences correlated to political preferences or news sources. But messaging played an important role as well.

“We are seeing strong evidence that even if people perceive high risk, they’re unlikely to engage in risk reduction unless they are getting messages about efficacy,” Elizabeth Koebele, assistant professor of political science at the University of Nevada and a member of the Risk and Social Policy Working Group, told me. “Instead of telling people about the pandemic itself, we need to communicate about the efficacy of risk-reduction behaviors — about both their effectiveness and the perceptions of their effectiveness.”

Illustrations of how effective masks can be in protecting both the wearers and people around them are good ways to show how people can adopt an easy behavior that works in keeping everyone safe.

It’s best to avoid speculating when communicating about risks, Koebele said. “Be clear about what you know and when you know it.” Simple messaging works best, like the red, green, and yellow color-coded maps of where the virus is spreading fast or slow. Daily briefings help elected officials to build trust, even if people do not pay attention to every detail. “The act itself is important,” she said,

Know what you’re trying to communicate

Horst Simon, founder of Risk Culture Building Advisory Services, a network of risk specialists, says it’s key not to forget how important information gathering is as a part of risk communication. That means not only collecting information about the risks themselves, but also understanding the people you’re trying to communicate with and the unconscious biases that might affect how they’ll respond to the information you give them. “How each and every person will respond depends on many things: their generation, upbringing, current financial status, how emotional they are,” he said.

Backing up risk messaging with actions is essential in preventing panic and fear. Companies that responded effectively to the pandemic acted quickly to avoid panic, which included getting sanitizers, masks, and gloves to distribute to their on-site employees and customers. “Get people to understand that you know there’s a problem and that you’re addressing it to keep them as safe as possible,” Simon advised.

Although the issues surrounding COVID-19 are complex, the principles for talking about the risks it poses are relatively simple: Strike the right balance between fear and optimism; be honest about what you know; focus on what works; read your audience. And as we move into a future in which the specific risks surrounding COVID-19 begin to ebb, it will be useful to apply these lessons to communicating about the other risks — known and unknown — that we will inevitably face.