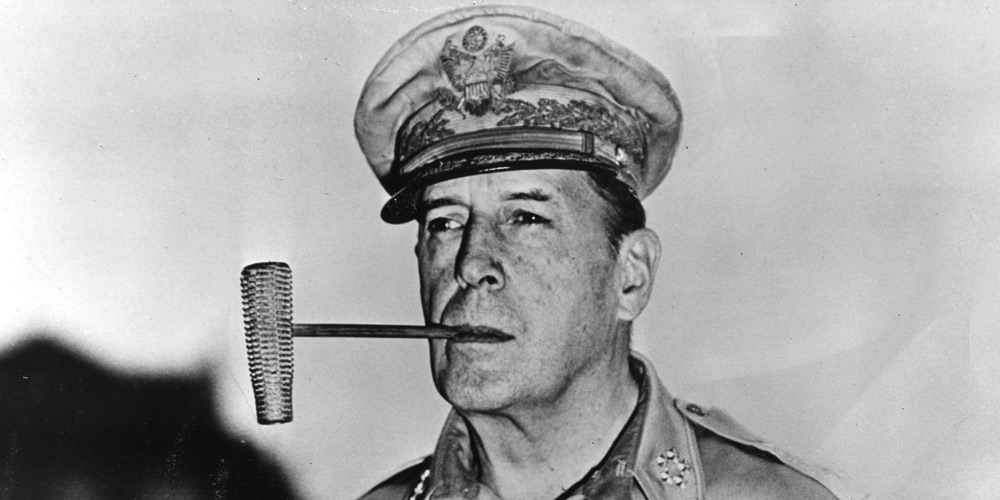 I find hubris to be a fascinating cognitive flaw. Perhaps the spectacle of arrogance leading to a fall from grace provides a socially acceptable outlet for my predilection for schadenfreude — another obnoxious personality glitch. But my flaws don’t matter all that much. I’m not a leader.

For leaders, the consequences of cognitive flaws like hubris are magnified. And nowhere is the danger of managerial hubris more evident than in the career of General Douglas MacArthur, whose life and career I studied for my book No Substitute for Victory: Lessons in Strategy and Leadership from General Douglas MacArthur. In June 1950, when President Harry Truman appointed him to head the United Nations Command at the start of the Korean War, MacArthur was already a prime candidate for hubris. He had served as commander of the U.S. Army Forces in the Pacific in WWII and was still, at age 70, serving as the de facto leader of postwar Japan and its more than 80 million citizens. He was, as biographer William Manchester put it, an “American Caesar.” It is unlikely that MacArthur would have objected to the characterization, had he been alive to hear it.

For leaders, the consequences of cognitive flaws like hubris are magnified.

If MacArthur had an elevated sense of ego and invincibility by 1950, his initial success in prosecuting the Korean War surely reinforced the feeling. As the UN forces fought to hang on at Pusan, their last foothold on the Korean Peninsula, MacArthur mounted an audacious, large-scale amphibious attack well behind enemy lines at the port city of Inchon. The plan was risky, if not foolhardy: Inchon’s 30-foot tides are so extreme that the window for making the assault was limited to two days in September. Moreover, if the landing forces had been unable to take the port, they would have been trapped.

As it turned out, the Inchon invasion was a complete success. The North Korean Army reeled in surprise, and a day later, the UN forces at Pusan broke out. Within two weeks, the invaders had been expelled from South Korea and the UN forces crossed the 38th Parallel, heading north to the Chinese border. The stage was set for one of the 20th century’s most dramatic exhibitions of hubris.

MacArthur’s confidence seemed to know no bounds after Inchon. In mid-October, when Truman flew to Wake Island to present MacArthur with his fifth Distinguished Service Medal, MacArthur assured his boss that China would not enter the war. But in late October, China did, mounting testing attacks in North Korea before fading away. Over the objections of Truman and the Joint Chiefs of Staff, MacArthur, believing he knew best, insisted on a bombing campaign along the Yalu River to keep the Chinese out of North Korea. When it was over, he announced that he planned to “get the boys home by Christmas.” What MacArthur didn’t know is that more than 300,000 Chinese troops were massed in North Korea. They had been slipping across the Yalu even as he had been reassuring Truman on Wake Island.

On November 25, the Chinese Army struck. By January, after weeks of brutal fighting and heavy casualties, the UN forces had been driven back below the 38th Parallel and Seoul had been retaken by the enemy. In defiance of the long-standing norm surrounding the chain of command, MacArthur publicly blamed Truman and the Joint Chiefs for the reversal, claiming that their interference had hobbled him. (Blaming others is a typical response when things go wrong for hubristic leaders.)

In the early months of 1951, as the war bogged down around the 38th Parallel, MacArthur’s shooting war with Truman heated up. He made public statements accusing Washington, D.C., of not having the “will to win.” At the end of March, when Truman tried to initiate peace talks, MacArthur torpedoed them by proclaiming the war would soon be won. And then, in early April, he sent a letter criticizing Truman and the doctrine of limited war to a congressman, who released it to the media. “There is no substitute for victory,” MacArthur wrote.

Truman had reached the limits of his patience. On April 11, he recalled MacArthur, who returned to the U.S. for the first time in 14 years to tickertape parades and congressional hearings. MacArthur then undertook a year-long national tour, positioning himself as a candidate for the Republican presidential nomination. But after Dwight Eisenhower, who had served as MacArthur’s aide in the 1930s, won the nomination, MacArthur did what he famously said old soldiers do: He faded away.

MacArthur’s recall was an ignominious end to a half-century of service and leadership. Since then, due in large part to his self-destructive overconfidence, MacArthur’s reputation hasn’t improved, with historians focusing more of their attention on MacArthur’s short list of failures (which are rightfully weighted by the human losses in Korea) than his long list of achievements. Such is the cost of hubris to leaders and those who follow them.

Looking back, it is clear that MacArthur’s behavior wasn’t simply a matter of a military commander believing his own press and substituting his judgment for that of others. Instead, it tracks very closely with the symptoms described by business professors Pasquale Massimo Picone, Giovanni Battista Dagnino, and Anna Mina, in a 2014 study of the literature of managerial hubris in 2014:

What’s more, the authors write, hubris reduces the perception of risk while increasing risk-propensity behaviors. This results in what Ellen Langer called the “illusion of control” (pdf).

MacArthur, of course, suffered from all three of these symptoms, and he discounted risk. Today, these are attributes that people in organizations large and small may recognize in themselves, or in their own leaders — even if the enterprise is not engaged in a lethal struggle against Communist foes. For leaders and followers alike, it is important to be able to recognize these attitudes for what they are, and to do the mental work necessary to counteract this natural human trait. Leaders should grasp that any success an organization enjoys is likely to be ascribed to them, which represents a siren call to the ego that can be hard to resist. And followers who are receiving marching orders from a leader displaying hubristic traits should make sure they have a viable plan of retreat.