Having been a laborer in the business of thought leadership for a couple of decades, I’m always curious to see the rankings of management gurus that appear around the end of the year. At the end of 2013, the most conspicuous list was the biannual Thinkers50—the high-profile brainchild of entrepreneurial U.K. journalists, and past s+b contributors Des Dearlove and Stuart Crainer—which produced a flurry of nomination solicitations from wannabes, and gracious, self-promoting thanks from the happy winners.

You’re probably familiar with most of the people on thought leader lists like the Thinkers50. These are folks—Clayton Christensen, Rita McGrath, Marshall Goldsmith, et al.—whose names pop up regularly in the business press, convention brochures, and business book bestseller lists. But how did they become thought leaders? And if you aspire to become more influential in your company, in your profession or industry, or in the marketplace, how can you follow in their footsteps?

There are a number of books on content marketing, but there is a surprising dearth of books that are aimed straight at would-be thought leaders. (Well, perhaps not so surprising: if you know how to become a successful thought leader, you’re probably too busy becoming one or working for someone else who wants to become one to write a book about it.) But in the last couple of months, I received two books that fill this specific gap on the bookshelf. 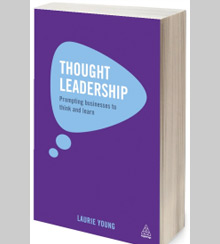 The first is Thought Leadership: Prompting Businesses to Think and Learn (Kogan Page, 2013), a pricey and rather academic take on the subject by Laurie Young, who passed away shortly before it was published in October. Young took a survey approach to thought leadership: tracking its origins to the Industrial Revolution; examining its sources (“recycled ideas” among them) and essential components (it’s “freely shared”); and analyzing how it spreads, and the mechanisms by which it can be made an organizational process. 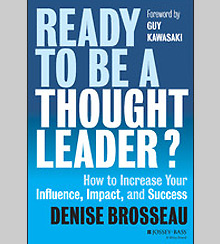 The second book, Ready to Be a Thought Leader? How to Increase Your Influence, Impact, and Success, by Denise Brosseau (Jossey-Bass, 2014), is a nice companion volume to Young’s book. Brosseau, who advises aspiring thought leaders under the auspices of the Thought Leadership Lab, takes a prescriptive approach. Following her own advice, she offers a seven-step process for attaining guru status that includes “Codify Your Lessons Learned” as step five—that is, “formulate a methodology, framework, or set of guiding principles so that others may join with you....”

Since we’re talking thought leadership, I’ll throw in a third resource. Art Kleiner, s+b’s editor-in-chief, shared this PowerPoint deck with me a couple of years ago and I’ve found myself referring back to it fairly frequently ever since:

Kleiner’s main focus is the development of a compelling business article or white paper, but his approach is easily expandable into a tool for analyzing any form of, or platform for, thought leadership. In particular, check out slide 4 and its “Four Orientations for Creative Work.” You can’t be a thought leader or create compelling thought leadership if you haven’t answered the questions Kleiner poses there.

Of course, all three of these works presuppose that the aspiring thought leader is thinking something that is worth saying aloud. Young, Brosseau, and Kleiner seem to be optimists in this regard—they see a wealth of content just waiting to be honed and polished. After reading thousands of business books, and writing some, too, I’m more of a pessimist. To me, the essence of thought leadership is the thought itself. If the thought is compelling, start honing and polishing. But far too often, aspiring thought leaders try to make a silk purse out of a sow’s ear—and that’s just a waste of everyone’s time.