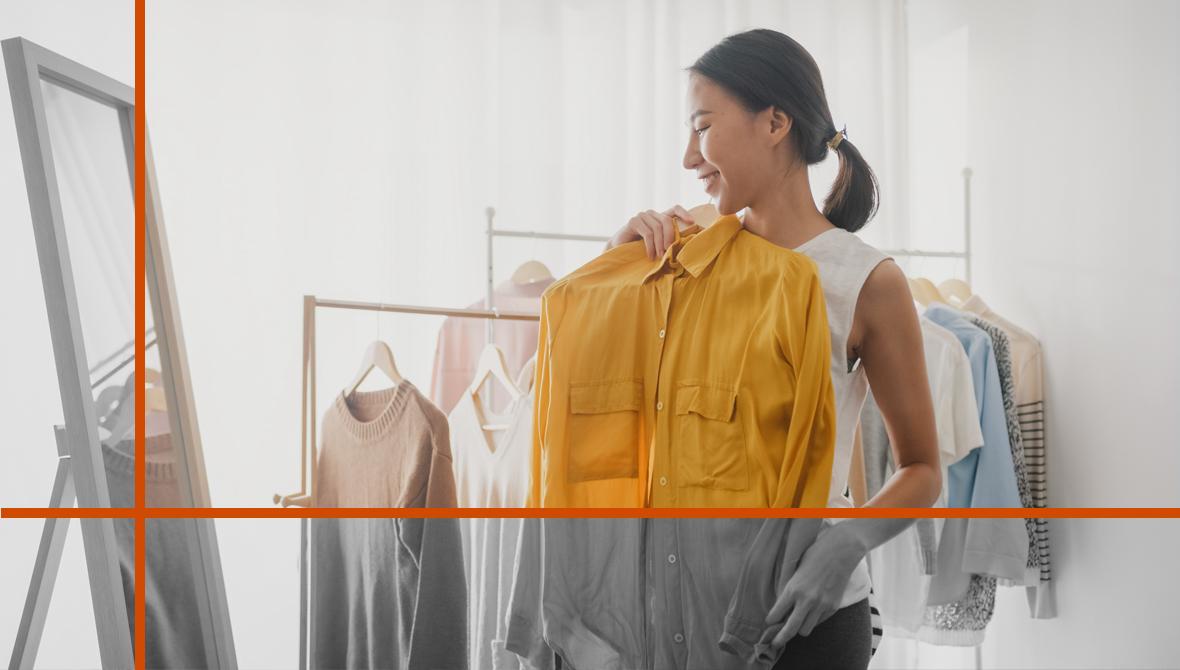 Emily in Paris is a mostly vapid show that relies on lazy stereotypes—pretty, young American wins over mean French sophisticates with pluck and fresh thinking—to sell a basic fish-out-of-water story. But that’s not why anyone’s watching, is it? Emily’s real appeal is in its luscious locations, and, of course, its protagonist’s gloriously over-the-top work wardrobe. Emily has nailed “dopamine dressing” in the office, which is supposedly the defining trend of post-pandemic fashion.

Dopamine dressing is a hashtag-ready pop-neuro-psych concept that sparked headlines in Vogue, Harper’s Bazaar, and other publications throughout 2022. You’ve heard of the power pose—how about power clothes? Certain items of clothing or colors, the theory goes, can make us feel happier, brighter, and more empowered; and this could have measurable benefits for performance. Tying this feeling of empowerment to the alleged release of dopamine, the neurochemical implicated in generating feelings of satisfaction or reward, both fulfills a cultural need to locate complex emotional experiences “in the brain” and is a satisfying alliteration. But, as Carolyn Mair, behavioral psychologist, business consultant, and author of The Psychology of Fashion, put it, “Dopamine dressing doesn’t really make sense if you understand dopamine.”

There simply isn’t a lot of scientific evidence that getting dressed up gives us that kind of rush. If anything is going to trigger a release of dopamine, it’s more likely to be buying the clothes than wearing them. Still, the concept makes an intuitive sense, as anyone who’s put on an item of clothing that instantly makes them feel good can attest.

That’s because what we put on our bodies does impact how we think, feel, and, of course, act. “What we wear can make us feel bad, insecure, awful, anxious, afraid of social embarrassment,” said Mair. “Or it can make us feel amazing—and the difference between the two is feeling comfortable, both physically and psychologically, in what you’re wearing.”

We ascribe an incredible amount of social and personal meaning to clothing, from red presidential “power ties” to the blue robes of the Virgin Mary. How we choose to dress ourselves—or are forced to dress—communicates who we are, while also affecting how we experience the world. “The meaning that we ascribe to the clothes that we wear [has] an impact on the way we act and then, of course, how we feel,” Shakaila Forbes-Bell, fashion psychologist and the author of Big Dress Energy: How Fashion Psychology Can Transform Your Wardrobe and Your Confidence, explained. “So if we attach various meanings to clothes, whether that be happiness or sentimentality or sexiness or fitness or whatever, when we wear them, we’re going to evoke those responses.”

Scientific investigations into that relationship between what people wear and their performance have been limited, although they hint at interesting effects. In 2012, for example, two researchers from Northwestern University coined the term enclothed cognition to describe the effect they observed when people put on a lab coat, an item of clothing associated with scientific rigor. Their data seemed to show that wearing the coat made subjects better at tasks that required attention to detail, implying that there was a scientific truth to the adage “dressing the part.” (Though some studies support this conclusion, others have been unable to replicate those findings.) Similarly, a 2015 study by US researchers found a positive correlation between formal clothing and abstract cognitive processing—when subjects wore clothing they would “wear to a job interview,” they exhibited increased abstract thinking. (However, the results of later studies were less conclusive.)

So, we know that there’s some connection between clothing and emotion and behavior, but teasing out that mechanism remains elusive. And knowing exactly how clothing impacts performance would be particularly helpful when it comes to our careers.

Unsurprisingly, what we wear to work has changed dramatically over the last century of office life. These changes have largely tended toward informality, as we perpetually bend our behavior and environments in the direction of comfort and accessibility. By 2018, only one in ten British office workers wore a suit; according to a survey from 2019, 50% of US companies permitted employees to dress casually every day, not just on Fridays.

The pandemic—when “dressing up” meant from the waist up—accelerated that trend; it didn’t matter what we wore to the office when the office was home. Even as offices reopened, many people retained a more casual work wardrobe: one survey of white-collar workers in North America from 2021 found not only an increase in people wearing jeans, T-shirts, and athleisure, but also a slight increase in people wearing pajamas to work.

For some companies, workplace dress can be a significant part of how a company reflects and communicates its values and culture, whether that’s the tacit tribalism of tech-bro hoodies or the increasingly rare power suit. But like much of modern work life, this requires a new flexibility and nuance. In one of the few studies of clothing and emotion since the pandemic, researchers found that what worked best for employees was wearing the clothing that felt appropriate to the venue and activity. The study was conducted by two PhD students at Columbia Business School and Adam Galinsky, the chair of the school’s management division. They randomly assigned remote workers to wear relaxed “home” attire, more formal “work” attire, or “mixed” attire—the so-called Zoom mullet of business on the top, nap-wear on the bottom—during their workday. Among the findings: workers in the home-attire category felt more authentic and therefore were more engaged with their work; the work-attire situation at times increased subjects’ sense of power; and the Zoom mullet offered no “psychological or work-related benefits” at all. What this implied, researchers concluded, was that there were positive psychological and organizational effects when “one’s attire is symbolically consistent with one’s context.”

Like much of the renegotiated work landscape post-pandemic—office versus home versus hybrid, fixed hours versus flexible hours—the question of what we wear comes down to balancing employee autonomy against the needs of the company. “The pandemic specifically made people understand that maybe you can perform better when you're not being restricted to a certain aesthetic, when you’re allowed to wear things that are more authentic to you, make you feel good, and how that has a positive impact on performance,” said Forbes-Bell.

We all want, and need, freedom. But that flexibility can also be double-edged. The paradox of choice refers to the negative effects of having too much choice; anyone who’s looked into their overstuffed wardrobe and declared they have “nothing to wear” can relate. The solution is a dress code that reinforces necessary organizational standards while also allowing personal style—guardrails that enable us to bring our best, most authentic selves without being distracted by whether we’re not fitting in because we’ve worn the “wrong” thing.

Some research seems to back this up. A study published in the Academy of Management Journal in 2022 found that workers who felt confident and attractive in their clothing and who felt like their clothing was unique to them exhibited higher self-esteem and, crucially, made more progress toward their work goals. How much progress? It turns out it’s the same as when workers were asked to plan their days in advance. Researchers said this pointed to the need for a flexible dress code that would encourage “personal flair” but within organizational requirements.

Emily in Paris should not, by any stretch of the imagination, be taken as a road map for good HR practices or, really, what to wear to work. Emily dresses like she stood in front of her closet and chose those items that sparked joy or eyestrain, depending on your point of view, and those rainbow platform heels on medieval Parisian cobblestones just scream Emily in Urgent Care. But her penchant for wearing clothing that speaks to her authentic self is a model that works, even if her Eiffel Tower–print silk blouse doesn’t.