For as long as there has been art and people wanting to buy it, there have been dealers, fairs, and auctions bridging the gap between the worlds of the creative and the wealthy in cozy deals that were not always transparent. Now new players online have blown that model wide open, bringing in not only more but new kinds of buyers, making information on pricing and provenance openly available, and ultimately threatening the livelihood of dealers and auctions houses.

Broader evidence of the threat comes from the European Fine Art Fair’s (TEFAF) annual Art Market Report, the bible of economic trends in the art and antiques world. The report showed a 7 percent drop in money spent on art globally and a 2 percent drop in the number of works sold in 2015 from the year earlier (in 2014, global art sales totaled a record $68.2 billion). 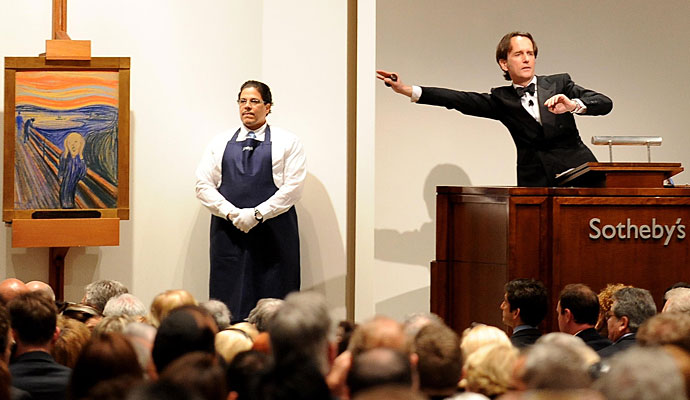 This might seem simply like a bubble bursting, but there is another factor at play. Internet art sales actually rose during this same time. According to the 2015 TEFAF report, the online sector grew 7 percent in the past year to $4.7 billion, accounting for 7 percent of the value of all global arts and antiques sales.

“Online platforms have revolutionized the art world,” says Henry Blundell, founder and CEO of online art-services firm MasterArt.com, in an interview for this post. A 15-year veteran of the commercial art world, Blundell’s four-year-old online company offers advice to collectors who spend in the million-dollar range. “You can research art online and place bids and contact sellers directly, so the tools of sale are migrating to the hands of the buyers,” he says.

Auction houses are feeling the pressure. Ultra-high-end sales — such as the Modigliani that sold for $170 million at Christie’s earlier this year — grab headlines and draw collectors into the salesroom to bid on other items. But such sales are now few and far between, accounting for 57 percent of the value of fine-art auction sales, but just 0.1 percent of overall transactions, the TEFAF report shows.

As a consequence, auction houses are making deals with sellers that are squeezing their margins to keep those big-ticket items coming through the doors. They hope collectors interested in works at lower prices will follow, lured in by the chance to see and experience such an auction.

Art economist Clare McAndrew, author of the TEFAF report, is concerned that the terms of some of these deals — for example, offering sellers price guarantees regardless of sales — may be unsustainable. “Can auction houses afford to continue this cutthroat competition for high-value sales to get buyers in the door?” McAndrew said in an interview for this post.

Meanwhile, dealers, who accounted for 53 percent of total art sales by value in 2015 according to the report, are also feeling the shift. But one New York City art dealer says the Internet has proven to be a good way for dealers and collectors to find each other: Dealers use the Internet to qualify potential buyers, search for potential clients, and educate themselves about collections and collectors. “Websites have become the client’s initial introduction to a gallery as collectors search for specific artists or specific works of art,” the dealer points out. “And artists that are not represented by galleries find online platforms as a segue into the marketplace.”

But if collectors are using the Internet as an education tool, especially on price, it doesn’t always work in the dealer’s favor. As auction results are instantly available online, it’s not unusual for a collector to “price check” a work on his smartphone during face-to-face negotiations with a dealer. Although this means potential sales could be lost or end up less lucrative for the dealer, this transparency afforded by the Internet helps increase market confidence.

One company in the vanguard of this trend is 1stdibs.com. Known as the Amazon of the art market, 1stdibs makes its money through dealer commissions of as much as 10 percent and by charging the more than 2,000 dealers on its site a fixed monthly fee, as well as a per-listing fee. In a testament to how valuable the site is to dealers, 1stdibs introduced a new rule this spring mandating that all sales generated as a result of the dealer making contact with a buyer through the site be processed through the site. This avoids the dealer getting a lead on 1stdibs and then conducting the transaction privately. Dealers howled, but ultimately gave in, acceding to the site’s ability to find a global clientele.

And who is that clientele? According to one top executive at 1stdibs, the migration of the consumer from off- to online is a generational thing. Today’s young consumers under the age of 30 are so comfortable with technology that if they have to go and see a thing before buying it, the sale likely doesn’t happen. Millennials buy everything from clothes to cars online with just a sentence or two and a few photographs to inform their choices. To them, art isn’t much different.

Millennials buy everything online. To them, art isn’t much different.

But the online consumer is also the more mature collector who is comfortable with technology, is already collecting, and knows what he or she is looking for. “We buy Loetz glass online,” a wealthy couple from Chicago says. “We know the work and don’t have to see these in person to know they are what we want. But there is a limit on how much we’d spend sight unseen.”

Kai Kuklinski, CEO of AXA Art, one of the world's largest insurers specializing in art, says, “Our experience is that those who are buying art online are relatively new to the art market, and will spend up to around $10,000.” But that dollar amount apparently is moving skyward.

“Today people will buy based on an email and at astonishing prices. The reason is that those buyers follow the artist, the series, and are familiar with the pieces — so the benefit is speed and access,” says Anne Booth Dayton, a vice president and senior director at Collectrium, a technology company that created a mobile Internet platform that allows collectors to keep track of, insure, and generally manage their artwork online and on the go. (The startup was purchased by Christie’s last year and is offered as a perk to its customers.)

However, there are elements of being a big offline buyer that would be hard to give up, no matter how comfortable one is with technology. “One of the perks of being a high-end buyer is being invited to art fairs around the world,” McAndrew says. “It’s traveling and being feted, whereas Internet buyers may be tied to a desk.”