Contemporary art often amuses me. I’m thinking of the 200-lb pile of wrapped candies that’s meant to be “installed” in the corner of a room for your guests to eat—or the waxwork of supermodel Stephanie Seymour made to hang on your den wall like a hunting trophy. 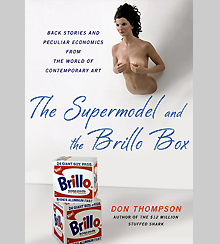 And there’s York University economist Don Thompson’s personal favorite: Yves Klein’s Transfer of Zone of Immaterial Pictorial Sensibility, a conceptual art piece executed and sold between 1959 and Klein’s death in 1962. As Thompson tells the story in The Supermodel and the Brillo Box: Back Stories and Peculiar Economics from the World of Contemporary Art (Palgrave Macmillan, 2014), Klein offered to sell art lovers an “immaterial zone”—that is, empty space. This was truly the emperor’s new clothes of the art world: You gave Klein a specific amount of gold leaf and he gave you a receipt stating you had purchased a zone of your own. But that was just the first step. If you were willing to pony up more gold leaf, Klein would throw half of it into the Seine (keeping the rest as his fee) and burn the receipt. You would receive photographs and an affidavit documenting the act. Apparently, Klein found eight buyers with a hankering for immaterial zones.

Of course, amusement turns to bemusement when you consider that the pile of candy sold for US$4.5 million and the waxwork of Seymour brought $2.4 million at auction. In fact, the market for contemporary art is booming again, after a big dip during the Great Recession. In May, Christie’s had its best auction ever, selling $745 million worth of postwar and contemporary art. Bloomberg reported that 68 lots out of 72 offered found new homes. But what is it that makes a Jeff Koons balloon dog worth $58.4 million and what can marketers learn from that?

Well, for one thing, there’s the power of a compelling backstory. The story of a piece of art—who made it, how it came to be, what happened to it in the past, and who has owned it—“may be more important than the artwork itself,” according to Thompson. That’s why art experts estimated that the value of Picasso’s Le Rêve actually rose after casino owner Steve Wynn accidently stuck his elbow through it.

The value of Picasso’s “Le Rêve” rose after Steve Wynn stuck his elbow through it.


Another insight relates to the value of reputation. Why did one painting created by Rachel Howard sell for $90,000 in 2008 and, a few months later, a similar painting by the same artist sell for $2.25 million? “The difference,” explains Thompson, “is that while Howard had created both, the second had Damien Hirst’s (indistinct signature) on it.” Howard worked as a technician for Hirst, who is the creator of works such as The Physical Impossibility of Death in the Mind of Someone Living. And Hirst is considered one of the great, if not the greatest of, contemporary artists—a reputation conferred on him by credible third parties, including critics, gallery owners, auction houses, and museum directors.

A third lesson regards the price-boosting effect of the art-buying experience. Paraphrasing Marshall McLuhan, Thompson observes that the “market becomes the medium” when it comes to selling art. Auctions create emotion-laden competitions to buy and be seen buying that drive prices up, even though, says Thompson, “Half of the works purchased at auction in 2013 will likely never again resell at the hammer price.” Art fairs, such as Art Basel Miami Beach and Frieze London, are also vibrant experiences, featuring VIP passes and lavish events that drive up both attendance and sales.

These are the things that distinguish Andy Warhol’s Brillo Soap Pads Box, which sold for $772,500 in a 2012 auction, from a case of Brillo in a supermarket, the design for which, Thompson informs us, was created by abstract expressionist and commercial artist James Harvey in 1961. It would be interesting to hear what Harvey, who passed away in 1965, might have had to say about that.