On a recent flight from Athens to Santorini, the 150-mile hop over the Aegean was a smooth 30 minutes. But upon landing at Santorini International Airport, the large jet of about 200 passengers sat on the runway for 45 minutes. As I surfed the Web while waiting, I came upon the airport’s site, which noted: “With its relatively small apron, the airport is only able to serve up to 6 civilian planes at the same time.” As it turned out, there was enough capacity to land the planes that day, just not enough to process the passengers.

Later that night, I watched from high above the cliffs that ring the volcanic island as a series of large cruise ships chugged slowly through the wine-dark sea, one after the other. The next day, buses carrying many of those cruise day-trippers clogged the charming one- and two-lane roads, making it impossible for vehicles to pass one another.

On my way home, I had the bad luck to arrive at London’s Heathrow Airport at the same time as several dozen other large flights. I stood in line with thousands of people, waiting 80 minutes to get through passport control, which at less busy times can take as little as 10 minutes. At one of the world’s busiest airports, there’s plenty of capacity to handle hundreds of flights, but insufficient capacity to move travelers from the plane to the sidewalk. 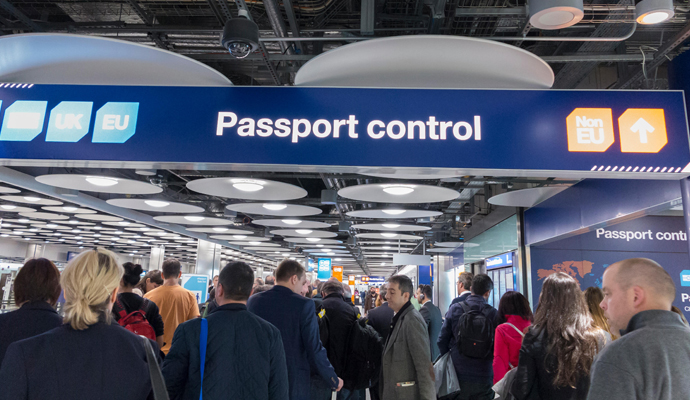 There is a point to this travelogue: E-commerce and data aren’t the only industries that struggle with a last-mile problem. And this problem highlights a dichotomy in the global economy. In the past few decades, there have been immense innovations and investments that have allowed for the greater, cheaper, faster, and safer movement of large numbers of people and goods over very long distances via land and sea. Great! But the investments in the infrastructure and capacity necessary to move all those people and goods very short distances through bottlenecks and transport nodes simply hasn’t kept up.

E-commerce and data aren’t the only industries that struggle with a last-mile problem.

Here’s what I mean. In 1991, the largest cruise ship could carry 2,744 people. Today, such a boat would be a minnow on the high seas. The largest cruise ship afloat has twice that capacity. (The same dynamic is taking place in the container shipping industry.) And the proliferation of discount airlines flying large jets throughout Europe has given millions of people the capacity to travel to places like Santorini and London by air.

As these transit modes gain scale, they get cheaper on a per-unit basis. That’s all to the good — for individuals, for companies, and for the economy at large. The private sector continually figures out ways to optimize supply chains and transit modes, tweaking equipment and practices to shave a few basis points of cost from the process of moving people and stuff across vast distances.

But the entirety of the journey isn’t simply the long distances eaten up by massive plans and boats. For a journey of 10,000 miles to work seamlessly, it’s not enough for the first 9,999 miles to go flawlessly, and for the last mile to be a frustrating waste of time. Every mile of a trip has to function at the same level of sophistication and efficiency. To make e-commerce viable, it wasn’t enough for shippers to move massive quantities of goods to distribution centers. Rather, the big e-commerce and delivery firms had to invest intensively — hiring lots of drivers, outfitting trucks with technology, designing intricate routes — to make the last mile go as smoothly as the first mile.

In recent years, however, the growth in the transport infrastructure (ships, planes, air routes) connecting big population centers has far outpaced the growth in the last-mile infrastructure (airports, terminals, seaports). It’s comparatively easy for the private sector to make more planes, schedule more flights, build ever-larger passenger and container ships. But it’s very hard — and in many instances, nearly impossible — to quickly expand the capacity of runways, airports, and sea terminals to handle the rising traffic. Many airport runways are penned in geographically by features such as mountains and seas, or by the cities that have grown up around them. New York’s airports literally don’t have any space to build new capacity. And in an age of widespread public austerity, the public investments required to build new runways and terminals, hire hundreds of more security agents, and expand the depth of harbors and the width of roads have been slow to materialize in many countries.

There’s also an element of psychology at work here, too. All industry participants have an incentive to rationalize their own operations to the highest degree. The benefits all fall immediately to your own bottom line when you can make your airline or cruise line run more efficiently. But airlines and cruise lines have less of an incentive to invest unilaterally — or even to encourage industry-wide investment — in infrastructure expansion. The fruits of those investments take far longer to materialize, and they will be shared by your rivals.

It would take a mathematician more skilled than Pythagoras to square this circle.