How important are intangibles such as character, organizational citizenship, and good team-building skills in predicting the bottom-line performance of a potential employee? If they are important, how do you assess them when looking for new hires? And does it make sense to heavily weigh such qualities when considering a proven top performer? These are the questions that torment leaders in an era when more and more work is done in teams and performance is increasingly contextual.

They also were questions that intrigued Steven Whiting, professor of business administration at the University of Central Florida, and Timothy Maynes, who teaches at the University of Buffalo’s School of Management. The two academics were looking for a work environment in which to test their hypothesis: Organizational citizenship, of which teamwork is a component, statistically correlates with high performance and as such should be taken into account when considering job applicants. They wanted to see if potential employers who took such criteria into account reaped the benefits.

And as sports fans, they hit on a novel idea: Why not study how a group of businesses that particularly rely on teamwork evaluates entry-level talent? Why not study how the general managers and coaches of National Football League teams choose players for their annual draft?

The NFL draft turned out to be an almost perfect subject, both because the data it produces is robust and transparent, and because draft rankings clearly demonstrate what teams value most in potential players. And while sportswriters, analysts, and professional prognosticators focus obsessively on player statistics like tackles and 40-yard-dash times when trying to predict how college players will come out in the draft rankings, those who do the actual hiring — the general managers, coaches, and scouts for NFL teams — value character and team-building skills in addition to on-field performance.

In a recent paper, Whiting and Maynes examined drafting data to gauge the impact of positive behaviors on players’ standings in the draft. They found that players who exhibited team-building behaviors on their college team — taking time to help a freshman player, bucking up teammates when they were down, volunteering for thankless tasks — not only moved up an average of one spot in the draft, but they also had higher starting salaries than draftees who did not exhibit such characteristics. For linebackers and receivers, the average difference in annual salary was US$143,000 and $105,000, respectively. 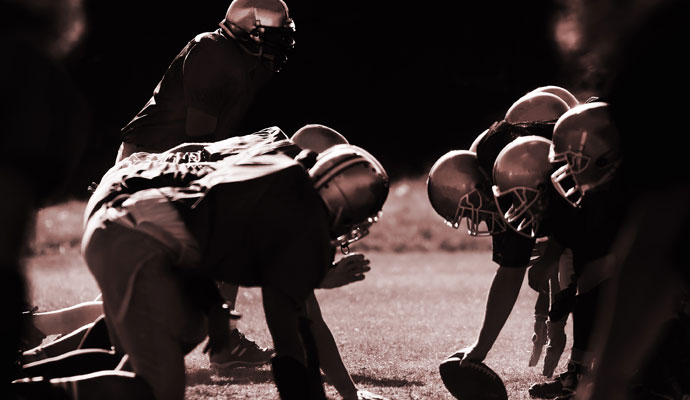 Why is this so? In any given draft, there are plenty of players with professional-level physical tools. As a result, mental attributes can often provide an edge. Managers, coaches, and scouts know from experience that good team players bring trust and cohesion to their teams, which helps produce improved team performance. What’s more, the impact of these characteristics can be measured, both in the comparative standings of teams that hire good citizens and in the way such teams experience reduced internal strife. This frees coaches to place their focus where it belongs: on preparing and executing a winning game plan.

When they watch videos of team practice, scouts look for players who help struggling teammates.

To assess intangibles such as character and team building, those charged with hiring players use the many tools at their disposal. Each spring, the league holds the week-long Scouting Combine at Lucas Oil Stadium in Indianapolis, an event where the best college players showcase their talents in preparation for the draft. But prospects aren’t simply tested on sprint times, endurance, and balance. Rather, they’re also put through an exacting battery of mental and psychological tests, including the Wonderlic Personnel Test. And the scores on those tests can be as revealing and informative as the results of a vertical-leap drill.

Individual teams also prepare for the draft by combing through every detail of participating players’ college careers. Scouts interview the coaching support staff at players’ colleges — “everyone down to the janitors,” Whiting said in an interview. They speak to fellow teammates and students who have socialized with players. When they do, they’re not looking for people who say nice things. Rather, they are seeking specific examples of players who behave in ways that support common efforts. When they watch videos of team practice, scouts look for players who help struggling teammates.

Whiting and Maynes’s study offers a clear example of how contextual performance and good team skills can inform hiring decisions while also providing clues about how other organizations could benefit from this approach. Of course, most companies don’t have the time (or the budget) that NFL scouts have to devote to assembling a comprehensive picture of a potential hire’s character. (Your typical manager, one would hope, has significantly less access to hires’ videos.) So how might we apply their research to the corporate world? Simply asking targeted questions is not the answer. Given the eagerness of job applicants to present themselves in the best possible light, few would consider answering the question “Is being a team player important to you?” with anything other than an enthusiastic “Yes!”

Recognizing the key role of data in demonstrating the advantages of team skills in pro football, leaders might start by building a better way to assess how such skills might make a difference in their own business outcomes. In the NFL, the consequences of poor organizational citizenship are immediately apparent on the field and are reflected in pitiless statistics on team performance. By contrast, many organizations talk piously about the value of teamwork but remain deeply wedded to the belief that individual high performance is the key to corporate success and to assessing employee value. Internal data testing this assumption could be useful.

It also helps to observe candidate behavior in a variety of settings — and to pay attention to what these may indicate. I recall a senior support-staff person at a high-profile law firm lamenting the partners’ determination to hire only “cream of the crop” prospects with gold-plated resumes — the few top graduates from the top-ranked schools. This determination was so all-consuming that the firm routinely ignored obvious character flaws such as rudeness, arrogance, and even bullying in what they considered top-tier prospects — behaviors this staff member routinely tried to bring to the partners’ attention. She made little progress, however, as they remained wedded to the belief that only great-on-paper hires could attract good clients. The result was a toxic team environment that began to undermine client satisfaction.

Learning more about the bottom-line impact of good team behavior might give such an organization more incentive to consider a broader mix of potential hires. Steven Whiting notes that organizations often judge performance solely on how individuals fulfill specified tasks related to the delivery of goods and services. By doing so, they undervalue the role of those who provide the essential support and relationship building that create strong cultures and keep people motivated. Rethinking how to define star performance would be a good place to start as we try to accommodate to the present reality of team-based organizations. It’s a whole new ball game.