I haven’t worked in an office — a proper office — since 2008. Back then, I had a cubicle plastered with sticky notes and a desk chair of questionable ergonomic value. I had meetings in the conference room, lunch at my desk. I had colleagues in cubicles nearby for advice and gossip. I had mice who left the tiny evidence of their nightly visits in my desk drawers.

Now my desk faces a wall covered in sticky notes and my chair is still of questionable ergonomic value — but that desk is in my home. My meetings are over the phone or Skype, and most exchanges are by email or text. It’s quiet. I don’t waste time commuting, and I can even throw in a load of laundry when I get the chance.

More people, not just freelancers like me, are choosing to work remotely. A 2018 survey by an alternative office space provider gleefully reported that 70 percent of workers worldwide work remotely at least once a week. Some people are suggesting that startups shouldn’t bother to get office space at all. I recently interviewed the two founders of an app-making company, one of whom lived in New York and the other in Georgia. They rarely met face to face. 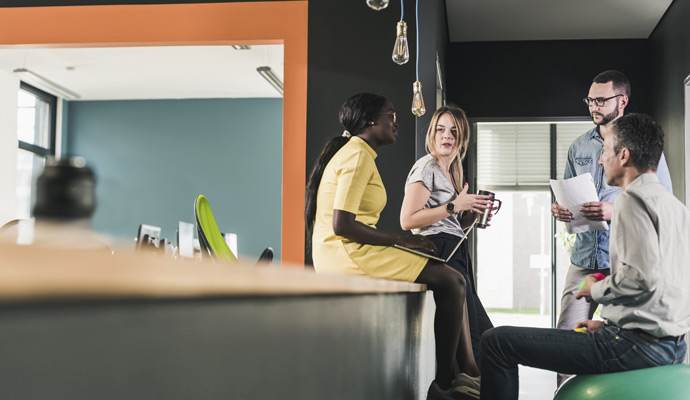 The corporate office as we know it is a relatively new invention. In the early part of the 20th century, offices were factories for paperwork — rows of desks, filled with rows of clerks; higher-ups had private offices, often ringing the factory floor. Mid-century efforts introduced efficiency metrics to the mix, but no one was able to really quantify productivity. The open plan, a descendent of the paperwork factory, was championed by architects such as Frank Lloyd Wright to promote collaboration and to break down walls, both literally and socially. In the late 1960s, the cubicle was invented as a futuristic attempt to marry how people actually worked with the efficiency that was supposed to come with an open plan.

However much we think offices have changed since the beginning of the 20th century, they really haven’t. The trusty open plan is now the most common office design in the U.S., but it is also the most hated — it is loud, lacks privacy, and sends the wrong signals about trust. And it fails at precisely what it was supposed to do: inspiring collaboration. A  2018 study tracking employee interaction in two newly designed open-plan corporate offices found that face-to-face interaction decreased by about 70 percent in both, and email and other forms of digital communication also went down. “Open architecture appeared to trigger a natural human response to socially withdraw from officemates,” the authors concluded.

For the better part of the office’s life, employees had to use them. Now they don’t, and that puts a lot of pressure on executives to justify offices. “One idea was that [offices] provided interaction that you couldn’t have outside of them,” Nikil Saval, author of 2014’s Cubed: A Secret History of the Workplace, told me. In 2013, when Saval was working on his book, the buzzword in office design was serendipity: Being in an office meant you would have the unplanned meetings that lead to creativity, innovation, and collaboration.

For the better part of the office’s life, employees had to use them. Now they don’t, and that puts a lot of pressure on executives to justify offices.

The concept has been around for decades. The prodigious output of Bell Labs was put down to the campus’s long corridors, which forced the engineers, chemists, and researchers into serendipitous hallway collisions. Even as remote working was on the rise, Marissa Mayer, then Yahoo’s chief, banned it in 2013. “Some of the best decisions and insights come from hallway and cafeteria discussions, meeting new people, and impromptu team meetings,” the memo to Yahoo’s some 11,500 employees read.

This serendipity was the reason given for offices to exist. Kristen Conry, a managing director at the San Francisco–based architecture and design firm Gensler, explained in an email that designers are still trying to manufacture serendipity with “carefully considered circulation paths.”

According to Lisa Reed, project manager at HOK, an architecture, engineering, and urban planning firm based in St. Louis, serendipity can be fostered by environments that make people feel safe and secure. “I see a desire for ‘resimmerical’ environments, where we are bringing residential qualities into the workplace — whether it is a living room–style meeting room or passing through a break room that feels like a cozy home kitchen, you are more likely to have your guard down, be open to conversation, and take a few moments to explore where the discussion will go in these types of environments,” Reed said.

But does it work? Companies investing in optimizing their workspaces for serendipity and well-being can now collect data to justify their choices, though this has some unnerving implications. Boston-based Humanyze, a consulting agency, uses sociometric ID badges, which contain microphones to determine whether people are talking and accelerometers that monitor their physical movement. Taemie Kim, cofounder and chief scientist of Humanyze, said the data can be surprising. For example, one company that was a Humanyze client had several small break rooms, each home to a “crappy” coffee maker. “No one was really happy with the coffee,” Kim said, and worse, there were too many machines, which “didn’t give people the chance to bump into each other getting coffee.” Humanyze recommended investing in one higher-quality machine, placed in a central location. Not only were people happier, but the move “boosted the amount of unscheduled bumping into other people on other teams tremendously,” Kim said. There also was an uptick in the number of interoffice emails sent and calendar events scheduled.

There’s little empirical evidence that more meetings lead to more creativity, but one 2012 study that used sociometric badges found that people in both academic and industrial settings were, according to a standardized creative assessment scale, more creative when they met in person.

So is the office of the future just a calculation between the cost of real estate and the benefits of flexibility? Some big companies such as Bank of America and IBM have scaled back or eliminated their remote working options; IBM did so even after reporting in 2009 that 40 percent of its global employees worked remotely, allowing it to sell off almost US$2 billion in real estate. This indicates big business is reinvesting in smaller spaces and expecting face-to-face relationships to be profitable for a scaled-back workforce.

Designing for innovation and serendipity is only part of solving the productivity puzzle; designing for human beings is all of it. Some people will want that “resimmerical” environment; others want a great coffee machine, or a door to shut out the noise. I will freely admit that for all of my present productivity, I miss the office: the people, mostly, as well as the ability to simply ask someone a question in person. After a decade at home, I probably wouldn’t even mind the mice.