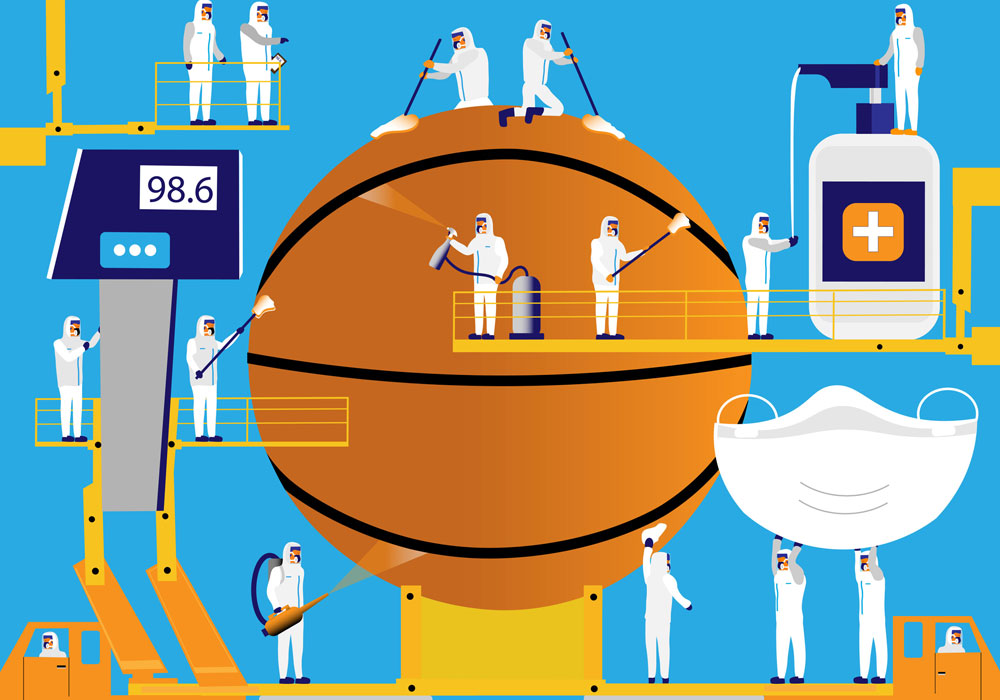 While the world is waiting for vaccines and enduring renewed lockdowns, the NBA has shown that there’s a simple, relatively inexpensive way for whole nations to get control of this pandemic and mute the next one: Send every family two little health-tech gadgets.

The NBA played its basketball season in a highly controlled bubble in Orlando, Fla. The bubble turned out to be a useful laboratory, albeit one that relied on enormous men instead of small rodents. One of the league’s goals was to spot any possible COVID-19 case early and keep the affected player from infecting others. So, upon waking each morning, each player was required to pop a smart thermometer in his mouth and stick his finger in a smart pulse oximeter, then complete an online health questionnaire. The whole routine took a couple of minutes.

Both devices connected wirelessly to apps, which tracked the data and showed anomalies that suggested a player was getting sick. The collected information worked well enough to keep the NBA on track right through the Los Angeles Lakers’ championship win. Pretty much everyone in the league was happy with the outcome. “I think if you ask people in the bubble how they feel, my guess is that most of them feel like there’s not a safer place than we’re at as far as COVID is concerned,” Sacramento Kings coach Luke Walton toldUSA Today during the season.

The NBA’s example involves a small sample in a controlled environment. But it allows us to see how broader public health could benefit if millions of people were to use such devices. Health trackers are not new. Devices such as the Fitbit and the Apple Watch have been around for years. But the accuracy and affordability of this new generation of health trackers and connected devices — and the new depth of data they can collect for analysis — make this moment, especially in the context of the global pandemic, different. As consumers adopt more of the many emerging smart health devices and apps, and as companies move to anonymize, aggregate, and share the data they get from device users, public officials will be able to spot and track virus outbreaks much like they track storms on a weather map. And with this information, they’ll be able to make safe, pinpoint decisions about everything from health testing to opening schools. There’s been talk of such public health tracking through smart devices for years, but now the scenarios are real, not theoretical.

Health trackers have been around for years. But the accuracy and affordability of this new generation of devices and the new depth of data they can collect make this moment different.

Smart thermometer maker Kinsa, whose devices the NBA used, has already proven this out on a national level. The company was founded in 2012 by a group of MIT technologists, led by CEO Inder Singh. To consumers, Kinsa’s thermometers, which can cost as little as US$25, seem like a useful upgrade from a typical thermometer. For instance, with a smart thermometer, parents can keep track of their children’s fever patterns via data the device sends to an app, and they can even get suggestions on how to treat the fevers.

But as useful as such thermometers could be to households, from the company’s founding, Singh’s idea was that they could be even more useful to public health officials, potentially helping track flu outbreaks in real time. As Singh points out, current public health data comes from doctors and hospitals reporting on patient visits, which happen after patients get seriously ill. “There’s a huge delay from when someone contracts an illness and when they see a doctor,” Singh told MIT News. “The behavior in the home when someone gets sick is to grab the thermometer.” So, Kinsa gets health signals as soon as people get sick — and from people who get sick but never go to a doctor. Then, Kinsa fully anonymizes the data so it can be aggregated and analyzed without breaching personal privacy.

Back in April, as the COVID-19 outbreak gained steam in the U.S., Kinsa had about 1.5 million U.S. users — not an enormous number, relative to the total population. Yet it was able to predict hot spots and see where public health measures were being effective, often ahead of the U.S. Centers for Disease Control and Prevention. (As a Kinsa blog post notes, the people who buy its products skew younger and more affluent than the general population, but Kinsa has helped get its thermometers to a wider range of people through giveaway programs.) Today, Kinsa publishes a HealthWeather map, showing COVID-19 hot spots in real time. It also works with 2,000 school districts to help them track local potential flu or COVID-19 outbreaks and more safely open schools. And because the thermometers are available worldwide, what the company has achieved in the U.S. could be possible anywhere.

Now combine a smart thermometer with a pulse oximeter. Pulse oximeters measure blood oxygen levels, pulse rate, and breaths per minute — all potential indicators of the onset of COVID-19. The NBA used Masimo’s MightySat, which can cost $300, but there are many Bluetooth-enabled pulse oximeters on the market from companies such as Wellue and Beurer, some for as little as $30.

As of now, data from pulse oximeters isn’t being anonymized and shared (users in the NBA voluntarily shared their data). But if anonymized pulse oximeter data could be combined with the information from smart thermometers, public health officials would have what the NBA had: data that reveals when and where a dangerous virus starts to take hold. And this would help officials contain a pandemic and pounce on the next one before it would have a chance to spread beyond a small region.

A forward-thinking government might decide that it would be cost-effective to send about $60 worth of smart health devices to every home, then use the data to curb or prevent an outbreak of a deadly disease — especially since a vaccine could cost as much as $40 a person anyway. As an NBA coach might now say about viruses, the best defense is a good offense.