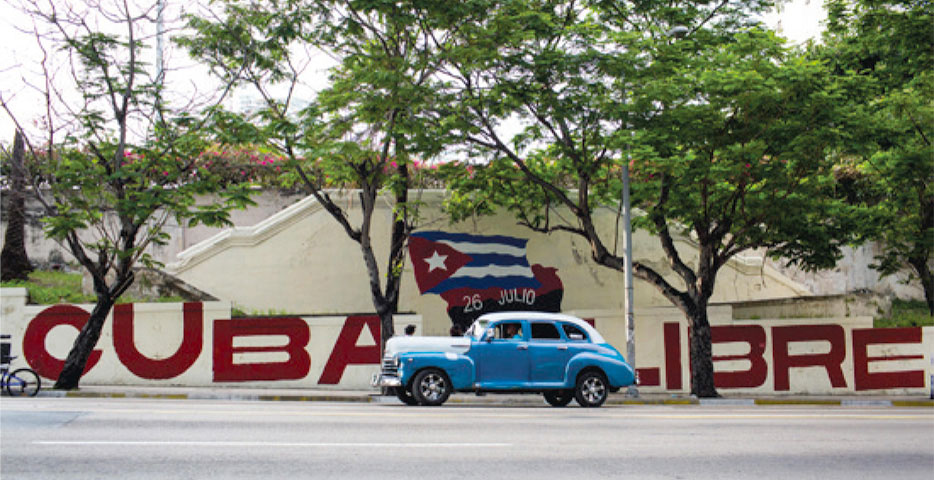 A sign on Calle 23, a busy street in Havana’s El Vedado district.

Cuba is not the average frontier market. The U.S. Congress has so far resisted President Barack Obama’s call to lift the embargo that has been in place since the early 1960s, and Cuba’s government is openly ambivalent about how much to embrace foreign companies. Like China when it first allowed foreign direct investment in the 1980s and 1990s, Cuba requires that outside companies do business through joint ventures with local companies. And like China, the government’s influence colors every aspect of business, with Cuban political leaders continuing to express suspicion about U.S. motives. 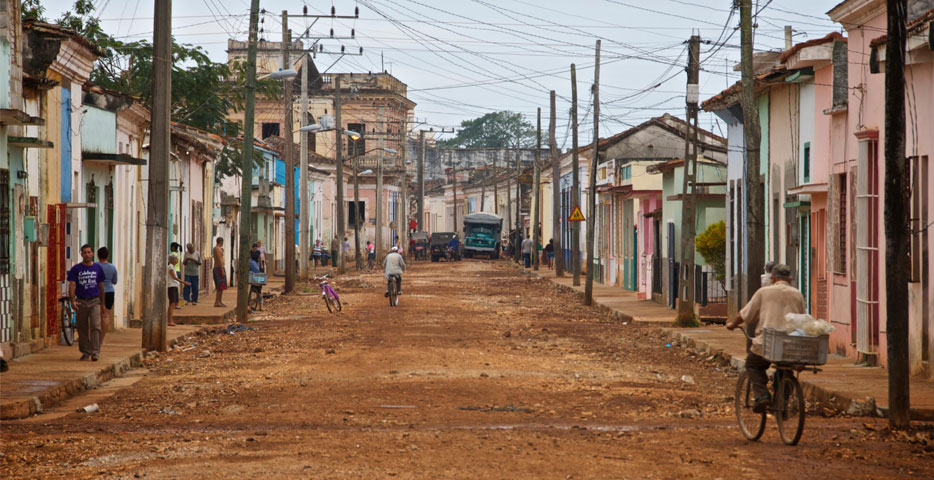 The main street in Remedios, Cuba.

There are some important differences between Cuba and China, starting with the reasons for businesses to go there. Cuba has a population of only 11 million, so to companies, it lacks an incentive to crack an enormous untapped market. And it’s an impoverished country with infrastructure not much better than what one would find in the poorest states in sub-Saharan Africa. More than 50 years of Communist rule and U.S. sanctions have brought down the island’s once-thriving economy. 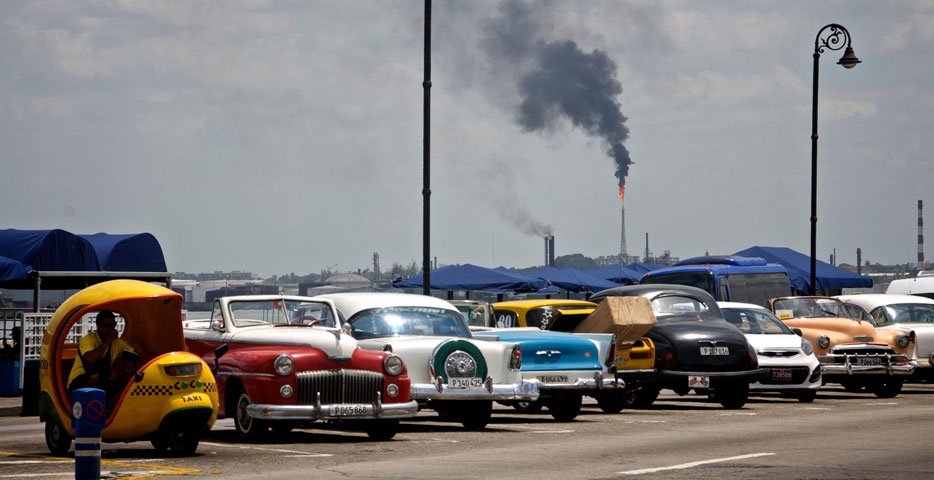 Classic American cars in Havana, with an oil refinery in the distance.

What can this frontier market offer companies that venture in? Cuba has limped along with a state-controlled economy that produces nickel and cobalt and sends high-end cigars and rum to developed countries other than the United States. Although there are estimates of oil reserves under its waters, exploration of offshore drilling potential hasn’t had positive results so far. 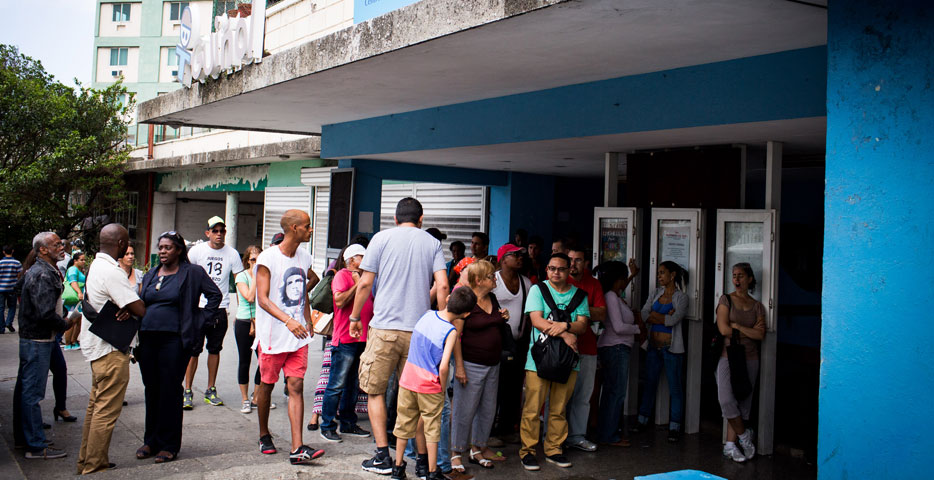 To go online, the vast majority of Cubans must queue up to buy access cards sold by ETECSA, Cuba’s state-run telecommunications company.

Cubans are hungry for information from the world outside, but have had little access to the Internet, which is slow or nonexistent in their country. That fact alone is an invitation to foreign companies — and not the only one. Since U.S. president Barack Obama announced the easing of U.S. sanctions against Cuba in December 2014, nearly every day has brought news of U.S. cruise ships, entrepreneurs, baseball teams, agriculture producers, and celebrities landing in Havana. Although the government has begun to invest in making the Internet available, only about 5 percent of the Cuban population has regular Internet access at home, one of the lowest rates of Internet penetration in the world. 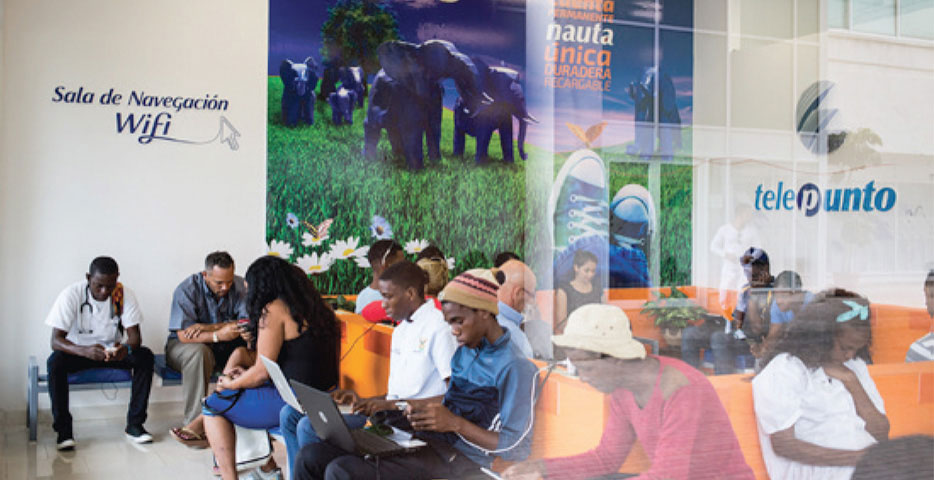 A Wi-Fi center operated by ETECSA.

Another option for Cubans who want to go online is to find one of a few dozen Wi-Fi hot spots strewn about the capital. The cost of one hour of Internet in Cuba — $2 — is a significant expense to most Cubans. Those who can afford that hour endure some of the slowest connection speeds in the world. In one 2015 survey conducted by Nearshore Americas, 45 percent of the respondents reported connectivity speeds of 1 MB per second; Internet speeds in the Dominican Republic tend to be 10 to 20 times greater. 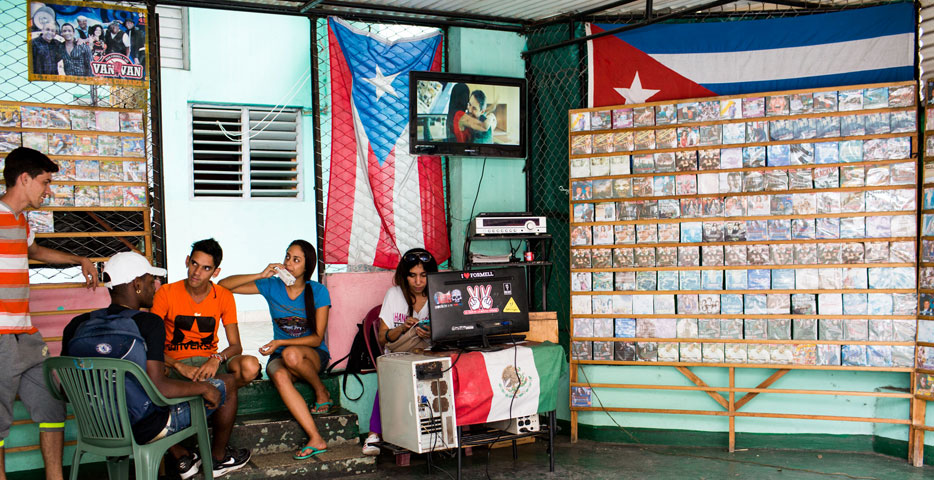 A store that sells music and movies in Havana, where nearly one-fifth of the population lives.

But this paradigm is beginning to change. According to a government white paper leaked by Nearshore Americas, by 2017, the ruling regime plans to make 3G data available to mobile phone users living in urban areas, and to expand broadband access to universities nationwide. By 2020, the government plans to extend private Internet access to 90 percent of the population. Netflix, looking to the future, is already making its video streaming service available, although right now, burned CDs of music and movies and small portable hard drives are the main means of passing information. 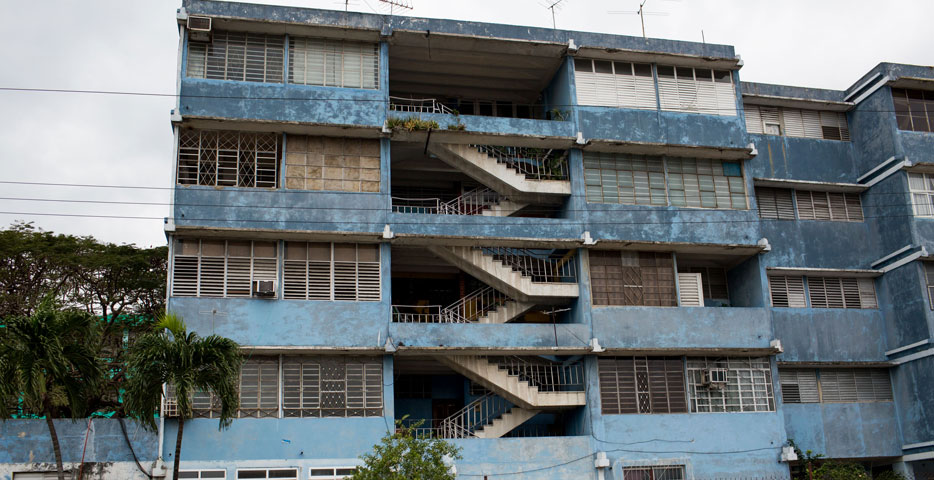 A Soviet-style building in Havana.

It is now 57 years since Fidel Castro overthrew the dictatorship of Fulgencio Batista and aligned his government with the Soviet Union. During the Cold War years, the United States government engaged in systematic attempts to overthrow him. Rhetorically at least, this emphasis has eased. In April 2015, Obama met with Raul Castro at a Summit of Americas conference in Panama and assured the Cuban president that the United States was “not in the business of regime change.” 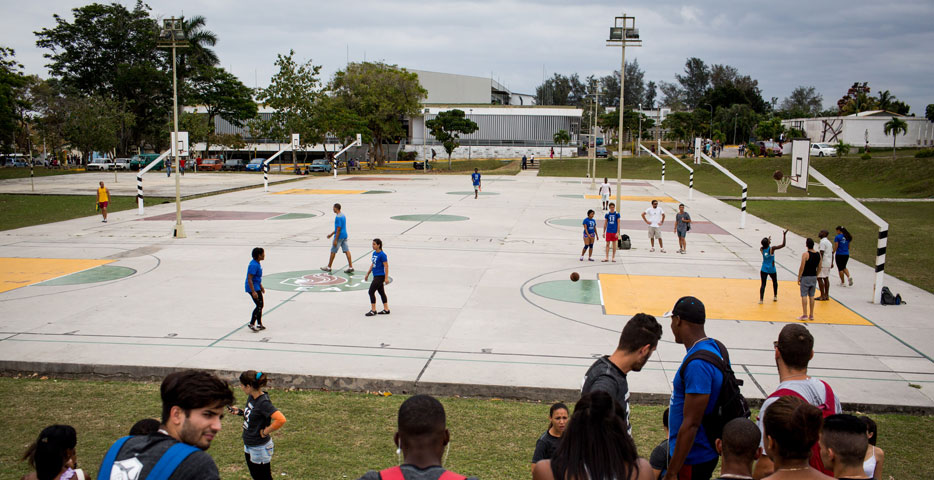 Campus of the CUJAE, or José Antonio Echeverría Higher Polytechnic Institute, in Havana, where engineering students graduate with advanced degrees.

Cuba is a country that badly needs a competitive edge in the global economy, and a huge opportunity lies with its highly educated population. In their five and a half decades in power, Cuba’s Communist leaders have consistently promoted universal literacy, and in recent years they have invested large sums of money in education in the STEM (science, technology, engineering, and mathematics) subjects. Each year Cuba produces thousands of new graduates in scientific and technological fields; many of them possess the skill set to contribute to the telecommunications industry, though there are few opportunities for jobs after college. 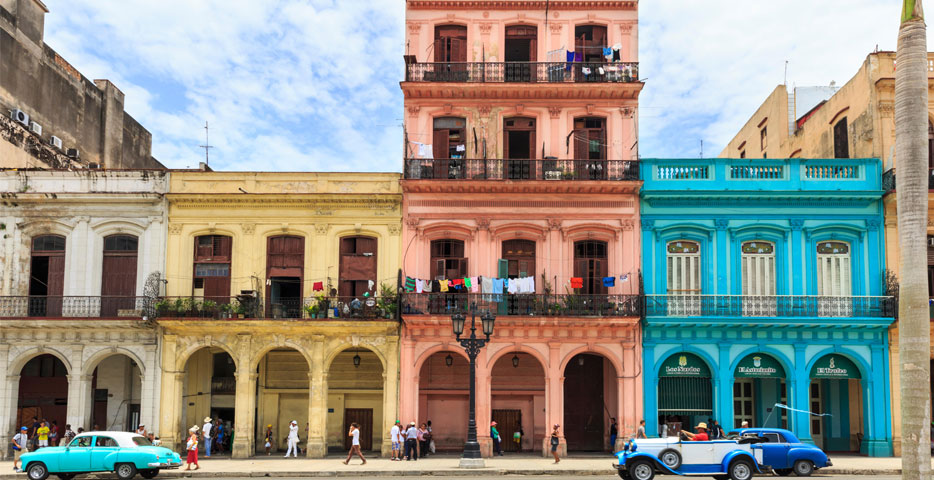 Creating industries around the local talent will take a great deal of reform. Many people have left Cuba because they can’t earn a living there. For business leaders who have decided to enter Cuba soon, there are a number of significant challenges, such as the relative absence of a consistent regulatory framework. Still, the economy looks as though it has nowhere to go but up. And the deciding factor may well be human capital — the people of the country.