You wouldn’t think that a story about fictional pirates in the mid-1700s would have much to do with today’s global industrial infrastructure. But in fact, it reveals an interesting and useful framework for thinking ahead and making business decisions in the 21st century. The movie Pirates of the Caribbean: The Curse of the Black Pearl is, among other things, an incisive parable about management styles. And it has a lot to suggest about three big news events of 2017: China’s 19th National Congress of the Communist Party, the government coalition talks in Germany, and the retrenchment at GE.

Those three events are all linked to vast new industrial infrastructure systems, connecting enterprises and governments together with transportation, logistics, energy sensors, and artificial intelligence. The systems are just getting started, but already their sponsors are jockeying for position in a worldwide battle for platform dominance. The fight is not quite as fierce as the movie’s ongoing conflict between the British Navy and two pirate groups. But this three-way contest among today’s industrial frenemies could define the patterns of global governance for years to come. 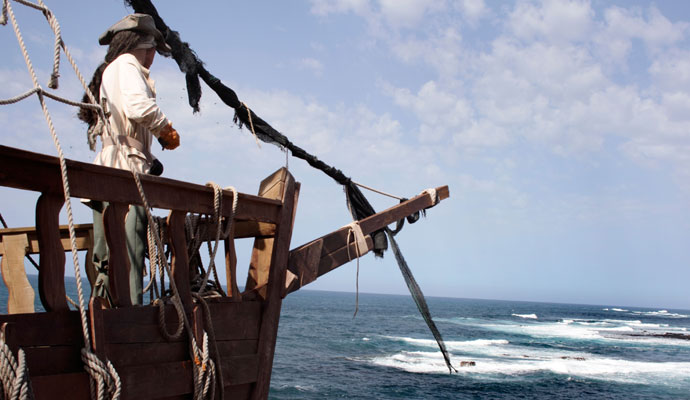 The three main players are, of course, China, with its Belt and Road Initiative (BRI); Germany, with Industry 4.0; and the United States, with its industrial platform emerging, in fits and starts, from companies such as Amazon, Microsoft, Google, Oracle, and GE. Each system, as it happens, has a different basic paradigm of governance. To use a framework developed by systems theorist David Kantor, one is closed, one is open, and one is random. Once you understand this framework, you may never look at pirate movies — or the real world — the same way.

China’s Belt and Road Initiative seems to be a closed system, in which legitimacy rests with authority: the people in charge. To visualize a closed system, think back to The Curse of the Black Pearl. The British Army, commanded by Governor Weatherby Swann (played by Jonathan Pryce), is a quintessential closed system. Everyone knows who the boss is, it is adept at marching in lockstep, and it wins the battle at the movie’s end. The only problem is that when it needs to do something creative, such as saving the governor’s daughter (Keira Knightley) from drowning, it is too authority-bound to act.

Germany’s Industry 4.0, with its ties to the European Union and the German government, appears to be an open system: The rule of law and consensus governance are the sources of legitimacy. The pirate crew that Jack Sparrow (Johnny Depp) assembles to chase the Black Pearl is one such open system. Everyone has a voice (including a man whose tongue was cut out; his parrot speaks for him). Moreover, when Sparrow’s ex-girlfriend (Zoe Saldana) punches him in retribution for stealing her boat, he admits that he deserved it. No one, not even the captain, is above the law in an open system.

The system emerging from Silicon Valley is at least as powerful as the other two, but so random that it doesn’t yet have a name. For a while, it seemed as if a few companies such as GE, with its Predix industrial infrastructure of data analysis, would dominate the Silicon Valley system; instead, the American platform appears to be taking shape in an ad hoc manner. Amazon is providing much of the cloud computing, with Microsoft delivering the rest; Oracle, Google, and Adobe are also involved; GE has downsized its ambitions a bit but is still in the game; and no single company has an exclusive edge. Legitimacy, in a system like this, accrues to whoever seizes the moment — in this case, by putting forth the most useful, accessible, and audacious technological solutions.

The analog in Pirates is, of course, the monster crew of the Black Pearl, led by Captain Barbossa (Geoffrey Rush). They’re a group of creative artists, you might argue, held together by the fact that they have no choice but to hang together. The telling scene is the one in which Kiera Knightley’s character parleys with Rush’s captain. They make a deal: She surrenders a prized medallion and Barbossa agrees to stop attacking the British fort. But he abruptly hauls anchor and sets sail for the open seas, with her still on board. “Wait!” she cries. “You have to take me to shore,” citing the long-standing pirates’ code of honor.

Barbossa leers at her, his eyes smoking. “First,” he says, “your return to shore was not part of our negotiations nor our agreement so I must do nothing. And secondly, you must be a pirate for the pirate’s code to apply — and you’re not. And thirdly, the code is more what you’d call ‘guidelines’ than actual rules. Welcome aboard the Black Pearl, Miss Turner!” That’s the kind of onboarding you can expect from a random-minded boss.

It is never clear, at any historical turning point, how its nascent institutions will unfold.

The leaders of the three systems might not agree with this analogy to pirates, and I admit it is a bit fanciful. Perhaps I should say that the BRI will be organized like a symphony orchestra, with authority accruing to the conductor; Industry 4.0 like a chamber music ensemble, with the direction agreed by consensus; and the American industrial infrastructure like a jazz band, with the most compelling creative participant leading the group at any given moment. Each of these paradigms has attractions and dangers, especially at global scale.

The lines of conflict are already in place. Major investments have already been made in these three systems. China is making massive BRI deals with emerging economies along the new Silk Road; Industry 4.0’s leaders are already reshaping their energy portfolio, as economic theorist Jeremy Rifkin explained in his recent s+b interview; and Silicon Valley is already reclaiming its role as a center of business-to-business infrastructure innovation. It’s not clear yet how interoperable these three systems will be, or whether businesses will be forced to choose just one or two platforms to attach themselves to, or whether other players may emerge (for example, one from India). But it is never clear, at any historical turning point, how its nascent institutions will unfold. Welcome aboard the tripartite system of the future, Miss Turner; and let’s keep our wits about us. 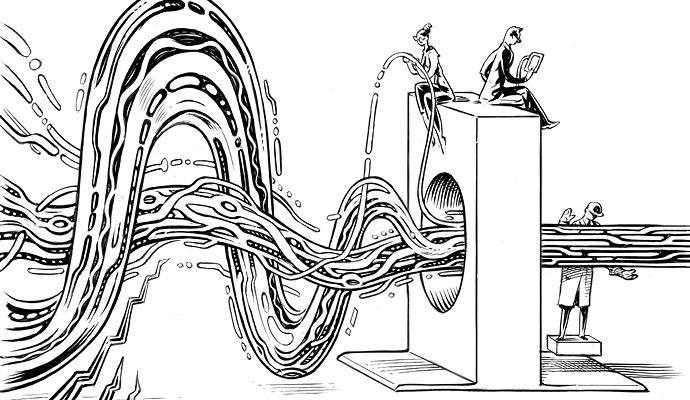 Why regulation of tech platforms is the new game changer for strategy
Lawmakers have big tech in their sights around the globe. Businesses that rely on platform ecosystems need to beware.
by Michael G. Jacobides
Digital issue