Everything I learned about management and leadership I learned at…the dance studio?

Well, yes. As a beginner student of the Argentine tango two decades ago, I used to come home reflecting on how much of what I learned from the micro interactions in class applied to everyday life. Those lessons in communication, adaptability, and teamwork stayed with me for many years, and resonate anew now that I’ve taken up the dance again.

Tango dancers, business leaders, and rising stars tend to demonstrate drive, persistence, concentration, and commitment. They also are ambitious, competitive, and impatient. These Type A personality qualities are often the ingredients for success in business and in life. But they also can lead to problems if not managed well. This is especially so for teams in which — just as in the tango — both leaders and followers share these high-performance traits. 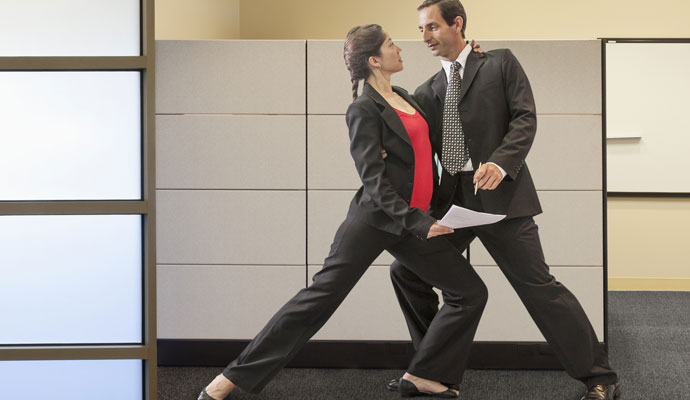 Those similarities between business and the dance make the tango a powerful tool for reflecting on the particular leadership and teamwork challenges that face high-performance teams — of any gender mix. Since the early days of the dance, skill and choice have been and continue to be far more important than gender in determining who leads and who follows, particularly among students.

In both the social and showbiz forms of the tango, the leader, whether it is a man or woman, sets a decisive course and protects the follower from obstacles, while the follower transforms that lead into artistry. Together, they dissect and reassemble eight fundamental steps into infinite combinations, punctuated by dramatic pauses and embellishments, performed to a 4/4 beat and the plaintive cry of the bandoneón.

In business, we can use words to communicate. But teamwork in the tango is nonverbal. On the dance floor or stage, a leader can’t just stop and tell the follower, “OK, now I’m going to lead a gancho.” (That’s the dance’s signature “hook” step in which the follower kicks underneath the leader’s knee).

On the dance floor or stage, a tango leader can’t just stop and tell the follower, “OK, now I’m going to lead a gancho.”

So it quickly becomes painfully obvious when leader and follower are not connecting solidly. “When you’re leading what you don’t want, you’re actually leading something else,” says Pablo Pugliese, a master Argentine tango dancer who has been performing since he was 9 years old and teaching since his teens. Pugliese has always been one of my favorite instructors because of the way he incorporates the psychology of tango in his classes. We have been working for nearly two years with business communication coach and author Nancy Ancowitz to adapt lessons from the tango for organizations to use without having to do years of rigorous study.

The essence of the Argentine tango lies in the intricate interplay of leader and follower, with each embracing a distinct role. And although learning the technical steps is an important part of the dance, the real challenge is psychological. The leader must embrace the idea that the follower is not subservient, but an active collaborator. Followers, typically just as ambitious as leaders, have to learn to accept the lead for the dance to work. Both are essential, equal partners.

Absolute beginners come into their first class starting from a similar baseline, not able to tell a boleo (kick) from a barrida (foot drag), so are more forgiving of each other as they all learn together. But as students advance to intermediate levels, where their skills vary widely, things become more complicated. As in the workplace, high achievers — both followers and leaders — can quickly become frustrated by classmates who are slower to pick up steps. If they are to succeed, they need to rechannel that impatience.

Many times in intermediate classes, I have faced a dilemma when my partner is still learning to lead a step. If I follow every signal precisely, even if my partner is not clearly leading what we are practicing, the result will not be what we are supposed to execute, frustrating us both. But if I ignore that he is unintentionally leading, say, a molinete (grapevine turn) and instead carrying out the ocho (serpentine steps) that we are supposed to be learning, I am not actually following.

I’ve solved the dilemma by tailoring my approach to the personality of my dance partner. The most evolved partners, and the best to work with, are those who recognize that both dancers are sharing a learning experience, which turns each mistake into an opportunity for growth. We take equal responsibility for communicating and understanding leads. (Luckily, in class, you may communicate verbally if you really need to.) These are the kind of partners you want in business: leaders who focus on shared success and understand that individual ambition only gets you so far if you’re not working in tandem with others.

By contrast, other students I have encountered are out to prove something. They get angry at followers who don’t do the steps they think they are leading. These people don’t ask or care if they are giving the right signals, and they blame the follower when the move doesn’t work right. With such unpleasant characters, I’m not proud to say, I have “faked” following and made a mental note to avoid them at milongas (dances outside of class). Such an admittedly passive-aggressive approach avoids confronting a problem that is not going to get solved in a three-minute song (or, more likely, ever). But it doesn’t help either one of us learn, and it won’t work on the dance floor where there is no instructor assigning which steps to practice.

One of the exercises we use in Tango for Leaders, a simple lead-and-follow walk, is a powerful lesson in sending clear signals. Many leaders — regardless of gender — are fearful of making bold moves that might embarrass them or inflict pain on their partners. They get so worried about stepping on their followers’ feet that they adopt a sort of sideways waddle instead of moving straight forward. That makes it very hard for the followers to step straight back, as they are supposed to do. The result is not pretty to watch.

Outside the dance studio, many of these students are highly respected professionals who lead teams with great confidence. But the visceral experience of trying something new becomes a powerful lesson in building trust and being conscious of how vital it is to communicate trust in all interactions — and a reminder that we don’t always send the message we intend.

It’s also evident in dance, as in the office, that trust between leaders and followers is a dynamic and self-reinforcing feedback loop. Members of high-performance teams expect their leaders to trust them with responsibility. They know if their boss is trying to compensate — by moving more slowly, repeating instructions, pulling away from making a difficult move — for a perceived weakness and lack of trust. When they get an assignment from a leader who trusts in their ability, these followers will pursue it with excellence. On the flip side, if they find that their leader has misdirected them and caused them to trip up, thus wasting their preparation and effort, they may start looking for a new partner.

At work, as in the tango, teams depend on strong mutual trust and clear communication. Leaders in both contexts who have managed to recruit a fantastic partner, or group of partners, have to make sure that they thrive together. And both parties — leaders and followers — have to be clear about the signals they are giving to (and receiving from) one another. Replacing personal ambition with a collective aspiration, constantly working to build trust, and embracing empathy over impatience are crucial steps for a beautiful dance.