If you occupy the heights of the business world, staying grounded can be a challenge. The longer you reside atop a corporate Mount Olympus, the less connected you may become to the mundane world of work occupied by the rest of us and, perhaps more dangerously, the customers who pay the bills.

I’ve been investigating some whimsical solutions for leaders who need to get their feet back on the ground. One of them is the practice of shinrin-yoku, or forest bathing. Forest bathing, essentially hanging out in nature, sounds like nothing more than a walk in the woods to me. But Dr. Qing Li, a professor at the Nippon Medical School in Tokyo, whose book on the topic was published in April, says it “takes us all the way home to our true selves.” Sounds like a boon for leaders who want to be more authentic — or who just enjoy a good hike. 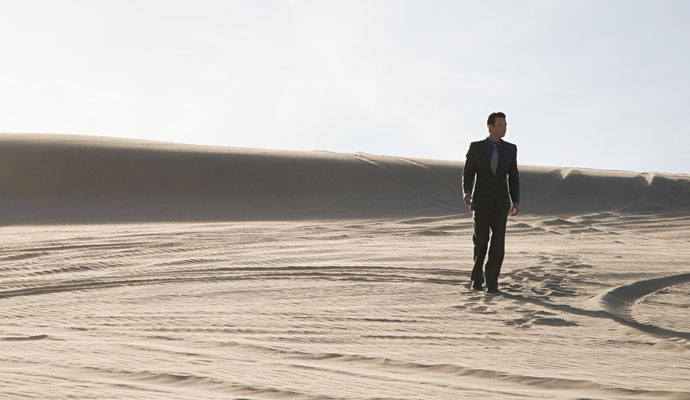 If you don’t have a forest nearby, you can try…earthing. As Clinton Ober, a former cable TV salesman turned earthing evangelist, describes it in a book he coauthored, Earthing: The Most Important Health Discovery Ever?, the ground below your feet is chock-full of negatively charged electrons that can neutralize the positively charged free radicals building up in your body from stress and other bad stuff. You can absorb these healing electrons by walking around barefoot (on a beach, preferably). If you don’t have time for the beach, you can buy an earthing mat, plug it in, and stick it under your desk. Maybe it’ll work — who knows?

I’m always looking for an excuse to go for a walk, whether it’s in a forest or on a beach. I’m also a skeptic. And you may be, too. But let’s not throw the baby out with the bathwater. It is important that leaders stay grounded — if not in the natural world, then surely in the businesses they are responsible for shepherding.

I was reminded of that truth by Tom Peters, who with Bob Waterman popularized the acronym MBWA, for management by wandering around. In his new book, The Excellence Dividend, Peters explains how he first heard what turned out to be a life-changing mantra in 1979 from John Young, who was then president of Hewlett-Packard.

“The real meaning [of MBWA] was that you can’t lead from your office/cubicle,” Peters writes. “You lead on the shop floor or, for that matter, in the customer’s or vendor’s place of business. You lead, damn it, by staying in direct touch with action that matters. And it gets harder and harder and harder as the company gets bigger and bigger and bigger.”

“You lead, damn it, by staying in direct touch with action that matters.” —Tom Peters

Peters points to Howard Schultz, who built Starbucks into a multinational giant and stepped down as its executive chairman in June, as a notable adherent of MBWA. In Secrets of Greatness, a compendium of anecdotes and advice complied by Fortune’s editors and published in 2006, Schultz said that he visited at least 25 Starbucks stores per week, and other stores, too: “I try to be a sponge to pick up as much as I can.”

I ran across another notable practitioner of MBWA when I wrote Be Our Guest: Perfecting the Art of Customer Service. Walt Disney was always wandering through the company’s studios, looking over the animators’ shoulders and participating in the creative process. After Disneyland opened in 1955, he would don old clothes and a farmer’s straw hat and tour the park incognito.

On one occasion, Disney rode the Jungle Cruise attraction and timed the trip. On discovering the boat’s operator had rushed the ride, which had ended in four and a half minutes instead of the full seven minutes it should have taken, he collared Dick Nunis, then a supervisor and later the head of the entire park. “How would you like to go to a movie and have the theater remove a reel in the middle of the picture?” he asked Nunis. “Do you realize how much those hippos cost? I want people to see them, not be rushed through a ride by some guy who’s bored with his work.”

Then, the two men took the ride together and discussed the proper timing. The boat pilots used stopwatches to learn the perfect speed. A few weeks later, Disney rode the Jungle Cruise four times with different pilots. In the end, he said nothing, just gave Nunis a “Good show!” thumbs-up and continued on his way.

MBWA might seem like too much of a luxury for today’s time-pressed executives, especially when so much of business is global and virtual, and schedules are booked months in advance. But Peters has a contrarian answer to that dilemma: The Rule of 50, which he borrowed from Dov Frohman’s book, Leadership the Hard Way. Frohman advised leaders to leave fully half of their time unscheduled! “Fifty percent may seem utterly absurd to you. I surely agree that it’s a big stretch,” writes Peters. “[But] the idea is well worth substantial consideration. And I’d say if your unscheduled time hovers around 5 percent or 10 percent — as it does for many of us — you’ve (we’ve!) got a big issue and opportunity.”

John le Carré, the British writer who elevated the spy novel to the realm of literature, once wrote that “a desk is a dangerous place from which to view the world.” That’s a warning as appropriate for business leaders as it is for George Smiley, le Carré’s beleaguered but never beaten spymaster. So unplug that earthing mat and get your feet back on solid ground.