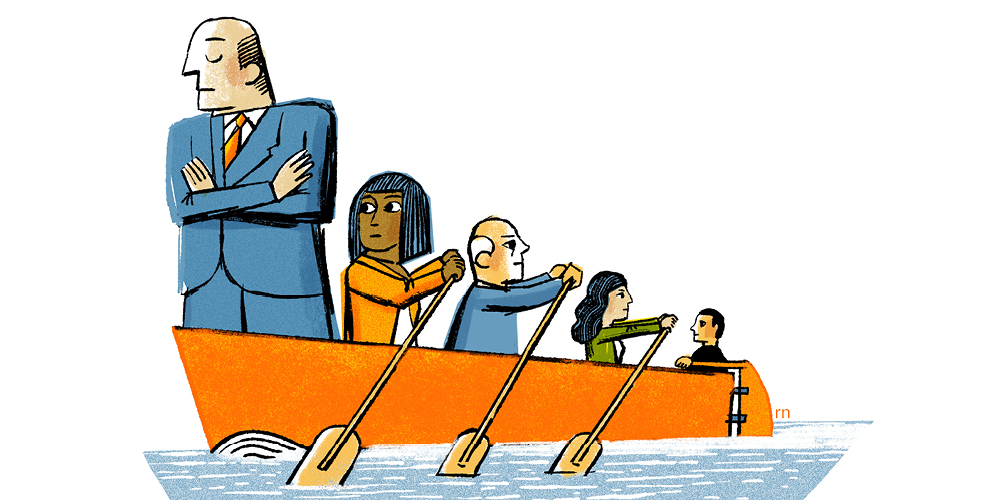 A persistent narrative has grown up over the years about why so many change efforts fail — or at least why they are harder than they need to be. It goes like this: A heroic leader is trying valiantly to change the organization, but he’s meeting with resistance. It comes from the layer of “permafrost” — aka long-serving middle managers. These managers are vital to the success of the change effort because they have to translate the new strategy into work streams and projects. But they’re not working fast enough or getting enough done.

Is this narrative true? Given the high rate and frequency of change failure in organizations, can all of it be blamed on lazy managers freezing up their organizations?

My latest research suggests there’s a different story — one in which the roles are reversed. When change efforts are failing, I lay the blame not on lazy managers but on lazy leaders. And by lazy, I don’t mean they’re not working at all, but rather that they aren’t doing the right work: the heavy lifting of thinking and decision-making that lays the groundwork for a successful change that the managers under them can then deliver.

The narrative of heroic leaders and lazy managers persists because most studies of strategic change consider only the first few months of a transformation effort, rather than what’s needed to sustain it over time. Compounding this problem is the fact that most studies talk only to leaders about what they did; they don’t ask managers what they needed, despite the fact that it’s managers who are tasked with delivering the change that leaders want.

So, in my most recent research, I talked to managers rather than leaders, and I studied long-term change efforts from start to finish. This four-year project told a very different story. In this version, it’s managers who are having to be heroic and work much harder than they should because leaders haven’t done their job properly.

When we use this lens to explore why managers are routinely being asked to go above and beyond, we find that it’s usually because leaders have failed to do one or more of the following: First, they weren’t clear enough about what they wanted; second, they were not realistic about how long execution would take or how much it would cost; and third, they weren’t consistent enough in the signals they sent about what was important.

To some extent, these three issues build on one another: It’s hard for leaders to be consistent in their signals or realistic about the time or resources the change will take until they’ve clarified the outcomes the change will produce. That’s why the first issue — the failure to be clear about what is wanted — is where most problems start. Leaders would do well to adjust their approach in the ways below.

Be clear about what you want. A new strategy needs to specify a target outcome — i.e., the change leaders want to produce — and, ideally, that target outcome should have three features. It needs to be outcome-based, not activity-based; it needs to have a financial target (such as improving operating margin by 20 percent); and it needs to be ambitious enough, with a sufficient time frame, to create fundamental, not merely cosmetic, change.

A target outcome with these three components enables managers to identify the projects, initiatives, and work streams that should be tackled — at different levels and in different parts of the business — in order to deliver it.

A margin improvement target, for example, might involve the human resources function delivering faster and cheaper hiring alongside the sales department improving its rate of converting prospects to done deals. When managers know what all of their individual activities need to roll up to produce, they can make much better choices about what these individual activities should be.

The trap leaders fall into is their desire to specify activities rather than the outcomes these activities will deliver. In my experience, they do this because they find this work is easier and more enjoyable. Their “laziness” here is that they prefer to default to this simple, enjoyable work — picking projects to work on — when they ought to be doing something very different: clarifying and selling the change.

The trap leaders fall into is their desire to specify activities rather than the outcomes these activities will deliver.

For example, the senior leadership team of a midsized technology company whose growth was plateauing had agreed the firm needed a radically different strategy. They’d asked me to help them develop the new strategy — including agreeing on the critical outcomes it should deliver and then making some clear choices about target markets and segments. But before these decisions had been fully discussed, let alone agreed upon, this senior team jumped to activities. One of the team members remarked: “There is one acquisition I think we should look at again,” while another said, “We need to work out the details of that China joint venture before the end of this quarter.”

These individual activities might well have turned out to be important, but they were just that — activities. They represented the “how” of the strategy, rather than the “what” or “why.” And until the team had clarity on what the strategy should deliver — in this case, we decided on a target of 12 percent return on capital within four years — it was premature to make any decisions about how that outcome might be delivered. Before deciding on the China joint venture or a particular acquisition, the team needed the 12 percent outcome nailed down.

The problem here is how a lot of leaders define work. A member of this same team asked me at the end of one strategy session, “When are we going to decide what we’re actually going to do?” — by which he meant deciding on which activities to pursue. That is what too many senior leaders still consider to be “work” — when what they should be doing is the work of clarifying and articulating the outcomes a change will produce. If leaders are primarily using their time to choose activities, not only does that deny managers — the people closer to the operations and the customers — the opportunity to choose how the strategy will be delivered, it also invariably means that leaders don’t have the time to work on clarifying and selling the change, which is work that really only those executives can do.

Leaders also need to be clear about the extent of change the new strategy will require. This means they need to set a big, multiyear target. Without this, managers could be forgiven for interpreting the new strategy as one that will be easy and quick to deliver — whereas anything that asks for a material improvement on current performance over a three- to five-year period signals a serious change that will require the business to fundamentally reinvent what it does or how it does it.

And that means that the ever-popular “quick wins” won’t cut it, so managers know they should spend their time scoping, sequencing, and resourcing work on the fundamentals — data, systems, capabilities, and innovation. Such efforts take time to produce a return. Without a long-dated target, these kinds of projects simply won’t ever get started.

Be realistic about timelines and cost. One of the biggest complaints from the managers I studied — especially in the second and third years of a change — was that leaders were unrealistic.

They expect too much too soon. They focus on what’s been delivered so far, and fail to learn the lessons this progress has revealed about what the firm can and can’t do well. This impatience for results signals that short-term results matter most, and that there isn’t much tolerance for the numerous iterations new processes invariably take. This pattern, in turn, reduces the chances of that big improvement being delivered.

Impatience is compounded when leaders fail to devote sufficient financial and human resources to the change. The well-known project delivery triangle has three sides, after all: time, resources, and outcomes. If leaders do not provide adequate time or resources to the initiative, yet still demand the original outcomes, that tension has to be absorbed somewhere. Cue heroic managers — and usually the very best managers — stretching themselves and their teams to make up the shortfall.

Carving out both time and resources for the new strategy takes work. It means agreeing to stop some existing initiatives in order to free up the budget — and explaining why this is being done. It means building coalitions to get these changes through finance, HR, and all the other functions or business lines that need to sign off on it. And it means creating and selling a compelling argument that the firm is capable of delivering a long-term change, and so should be afforded a generous time frame by its investors.

Be consistent in all the signals you send. When managers receive inconsistent signals, it’s hard for them to work out what the real priority is. Mixed signals can happen right at the start of the change — for example, when a leader says she wants a particular improvement but doesn’t share any metrics or rewards linked to the desired change. Adjusting metrics can be complicated, but making a change would signal that the new strategy is the priority.

Inconsistency can also creep in over time. This happens when leaders aren’t disciplined enough (another form of laziness) in how they talk about the “new” strategy — even when it is a few years old. Given how often people need to hear something in order to properly understand it, message discipline is required from leaders. Anything short of constant repetition risks being interpreted as inconsistency — when in reality it may simply be that leaders don’t think they need to continue to emphasize the importance of the change beyond the first year.

Leaving managers to make sense of a strategic change is lazy leadership, in my view. And whenever we allow leaders to be lazy, we create more of a need for heroic managers. If a business routinely requires heroism from managers in times of strategic change, it’s incumbent on leaders to step up and do more. Specifically, by working to clarify the outcome the change will deliver, by being realistic about the time and resources the change will take, and by keeping the message consistent until the change is complete, leaders will set up their managers — and the change — for success, with much less need for heroism.