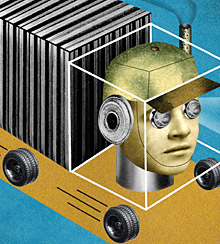 Each year, Wal-Mart Stores Inc. spends hundreds of millions of dollars delivering its merchandise across the United States. The 6,000 trucks in the retailer’s fleet are a common sight on highways, as are those of the many other companies that rely on long-haul trucking to transport their goods from coast to coast. But what if that fleet could be cut by one-third—and be made up of trucks pulled by slimmed-down tractors less than half their current size, with a computer at the helm?

It may be hard to imagine: trucks guided by GPS, radar, sensors, and software, hauling much of the nation’s cargo. Yet autonomous vehicle technology has made headlines for years, and experimental autonomous cars are already on the roads today. Google’s driverless cars have logged more than 300,000 miles on California and Nevada highways since 2011. That same year, Chinese carmaker FAW unveiled its own autonomous car, which it demonstrated on public roads. Toyota and Audi exhibited their versions of the technology at the Consumer Electronics Show in January 2013.

The use of autonomous vehicle technology in trucks, however, is more of a glimmer. There have been some developments to date, for example, computer-guided trucks that transport ore around mine sites. Yet, in these and other closed-loop transportation ecosystems, it is easy to maintain control and address issues as they arise. The appearance of driverless trucks on a congested highway poses many more challenges and will face technical, practical, social, and political hurdles. But despite these significant obstacles, this vision is worth exploring. The use of autonomous long-haul trucks (ALHTs) could add up to a multibillion-dollar opportunity for companies throughout the trucking value chain, and in turn, lower prices for consumers. Although the transformation is still years away, companies should start preparing for an automated future today.

ALHTs will have all the fundamental mechanics of the trucks we see today, but they will be guided by a suite of sensors acting together to paint a digital picture of the road for a computer positioned where the driver now sits. These sensors will provide the data to support an operating system that one might compare to the most capable autopilots in commercial airliners, able to take off and land without human intervention. Similarly, the operating system in driverless trucks will evaluate the road and surrounding obstacles, such as cars, trees, or people, hundreds of times a second, and will decide the best path on which to proceed to its final destination.

These new technologies won’t come cheap. It is hard to put an exact cost figure together, given that much of the technology is still in the pre–mass production stage. But the total cost of outfitting a truck with equipment and software could be as much as US$200,000. And although savings will vary from firm to firm, they could exceed $100,000 per truck annually. Over several years, the gains would far outstrip the initial investment and the maintenance costs. A significant portion of both the cost savings and the efficiency gains would come from eliminating drivers’ wages from the bottom line.

Diesel fuel costs would fall, too—as long as other factors, such as oil prices, hold constant—because the technology reduces consumption by optimizing acceleration and braking. The Center for Automotive Research estimates that driverless trucks would increase fuel efficiency by 15 to 20 percent. Accident-related expenses and insurance premiums also could decline, because automated trucks would be programmed for maximum safety, eliminating the driver errors that cause most crashes.

Along with the savings would come significant productivity improvements. Currently, restrictions on the number of consecutive hours a driver can stay on the road limit asset utilization. But the software controlling driverless trucks never gets drowsy, and that opens the door to round-the-clock operations. Higher asset utilization rates would reduce the need for capital spending on additional trucks. Retailers, distributors, and manufacturers that ship goods by truck will see additional benefits as competition among trucking companies converts the efficiencies of ALHTs into lower shipping rates. Retailers, in turn, could pass those savings along to consumers. The one-day delivery radius could also expand, enabling businesses to offer overnight ground shipping to more customers.

Society at large will also reap benefits. If truck driving shifted to off-peak periods, which is a viable option in a driverless vehicle, highways would be less congested. They would also become safer as the accidents involving trucks were reduced by eliminating human error.

Autonomous vehicle technology offers advantages across the trucking industry value chain. However, the pace and extent of eventual adoption will depend to a large degree on the ability of stakeholders—whether they’re shippers such as Con-Way and Allied or manufacturers such as Freightliner and Mack—to resolve a range of technical, practical, political, and social concerns.

On the technical front, driverless trucks could reach commercial viability within a decade, as the manufacturers of their supporting technology components ramp up production and prices, in turn, fall as the industry moves down the cost curve.

These components are still prohibitively expensive today; for example, the 600-rpm spinning light-imaging radar system that crowns most current autonomous vehicles costs upward of $70,000. And ALHT supporters must answer such difficult questions as how to refuel driverless trucks and protect their cargo when trucks break down. Fuel retailers, repair companies, highway patrol, and insurers, among others, will all play a role in finding the solution.

It’s worth noting that for truck manufacturers and incumbent suppliers, the impact of autonomous trucks will be mixed. Many will capitalize on new opportunities to supply billions of dollars of autonomous trucking equipment. But they’ll also see orders plunge for cockpit gear such as steering wheels and other components that won’t be needed if software replaces drivers. More importantly, if existing trucks can be retrofitted as autonomous vehicles, the current national fleet could find itself 30 percent over capacity, because of the efficiency gains that can be extracted from existing vehicles.

ALHTs will also face legal obstacles: Legislation allowing driverless vehicles to operate will be needed across the country. California, Florida, and Nevada have already enacted rules allowing testing of driverless vehicles. But a patchwork of varying state standards would create a difficult environment, which suggests a need for uniform federal rules of the road. To that effect, the National Highway Traffic Safety Administration is working on national standards, due in 2013 for cars and 2014 for heavy vehicles. In addition, autonomous vehicle technology will have to overcome resistance from a public frightened by the specter of unmanned trucks hurtling down highways.

Finally, as we’ve seen with automation in other industries, such as manufacturing, the use of driverless trucks is likely to face opposition from unions and their political allies as they are faced with the elimination of hundreds of thousands of truck driving jobs.

The Road to Opportunity

There are several different scenarios for how the adoption of autonomous trucking could unfold. One is that driverless trucks appear first in large industrial environments, where they can be contained (just like the computer-driven trucks already navigating mine sites). As with machines in the early days of factory automation, these trucks would have limited range and capabilities. But just as robots became indispensable to moving parts and goods around plants, autonomous trucks could expand to more open areas and longer distances as the technology is refined and proven. We may also see partial adoption. For example, some companies may opt for “remote-control trucking,” in which a driver pilots a truck hundreds of miles away through a complex environment of local roads until the truck gets onto the highway. At that point, a more basic, less expensive autonomous system designed for the relatively simple environment of highway driving would take over. This could be a palatable option for legislators and the public.

Given the obstacles that loom, it is likely that adoption will be an evolution along these lines. We won’t see highways dotted with driverless trucks in the near term. But the economics suggest that over the long term, the industry will migrate to autonomous vehicles. Trucking companies that deploy these technologies most effectively will secure industry-leading positions, and the OEMs and suppliers that provide the equipment needed by those leading firms will claim more than their fair share of the market. The most transformative addition to the value chain will be the autonomous vehicle operating system, a software package likely to cost hundreds of millions of dollars to develop. Google, now testing its system on public roads, may emerge as the supplier of a standard operating system for the industry. But car and truck manufacturers are likely already working to develop this critical component as well.

Executives at trucking companies, truck manufacturers, and equipment suppliers should start thinking through how they see this technology emerging, what the implications are for their current business model, and what they should do in response. The best approaches for each company will vary, but one thing is clear: Inaction isn’t an option. Given that heavy truck model changes occur infrequently, sometimes not for a decade or longer, ALHTs could be just one design cycle away.