The Year without Pants: WordPress.com and the Future of Work 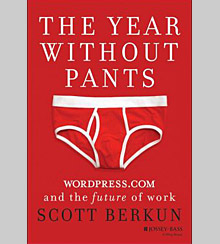 In August 2010, Scott Berkun became employee number 58 at Automattic Inc. You may not have heard of Automattic, but it’s the business behind WordPress—the open source blogging platform that has become the 15th most popular website on the planet.

Berkun had left the corporate ranks a decade earlier, when he handed in his badge at Microsoft and decided to make a living as a book author and management consultant. He did exceedingly well at both, and never looked back. That is, until he advised Automattic’s founder, Matt Mullenweg, to switch from a flat organizational structure to a team-based structure, and Mullenweg turned around and asked him to be one of the company’s 10 team leaders. Berkun accepted the challenge, and The Year without Pants is his chronicle of the experience.

On the face of it, the book details Berkun’s ups and downs during his time at WordPress. It’s an inside view into how a manager who earned his stripes years ago at a centralized digital behemoth interacts with a small, ragtag, and geographically dispersed team using a range of tools (including Skype, chat, and blogs—but rarely email) to make improvements to WordPress software and, well, goof around. If scholars of the future want to look back and see what it was like to work for a successful open source software company circa 2010, this book would be a good place to start.

Yet Berkun is doing something else here as well. He is exploring how distributed organizations can succeed both economically and culturally. Certainly not all do. But WordPress and Automattic have had a stellar run since being launched by Mullenweg in 2005. WordPress, which hosts more than 60 million blogs, is the leader in its space, and Automattic has raised tens of millions of dollars in private equity that Mullenweg says will fund its growth from fewer than 200 employees to several thousand.

WordPress employees meet up in person, periodically, at boozy company get-togethers, but mostly they kibitz electronically. Indeed, some of the more entertaining parts of Berkun’s book entail descriptions of WordPress’s headquarters in San Francisco, a hip and airy space that almost no one ever visits. When Berkun and a colleague decide to meet there, they roam about the empty rooms in search of a whiteboard. And here we really begin to grasp the contours of this new world. Work is no longer exemplified by location or central command, but by productivity and collaboration. The main office is vestigial. And who needs a whiteboard anyway?

The company’s culture arises from a number of complementary factors, some structural and some emotional. Without question, a distributed group of techies couldn’t have worked as efficiently, or functioned at all, in the pre-Internet days. But Mullenweg also seems to have a knack for hiring curious, good-natured, and self-motivated people, which allows for a labor ecosystem that’s low on ego and politics. And WordPress employees are tremendously empowered; if they want to improve a feature or try something new, they just go ahead and do it.

Transparency helps, too: Workers can see what their colleagues are doing and can likewise view their productivity metrics. Berkun isn’t terribly productive in comparison to the hotshot young programmers. But he brings other assets to the table—namely, experience in how to help a team break out of an incremental mind-set and thereby achieve a few big goals.

Berkun’s book doesn’t really succeed when it attempts to build up day-to-day drama. These men and women, after all, spend the bulk of their days bent over laptops typing snarky messages and writing code. And the book often bogs down in WordPress jargon and the minutiae of inter-team dynamics.

Still, The Year without Pants gives us a provocative glimpse of how the future of work may take shape for some companies. For instance, it helps us see, through the eyes of a manager who has lived through the actual experience, how the Internet gives us tools that challenge old organizational models, provided they are used judiciously.

One of the book’s delights is getting Berkun’s astute insights into management every page or two. Here’s an example: “Most people doubt online meetings can work, but they somehow overlook that most in-person meetings don’t work either.” The author himself comes across as fallible and decent and wise—a very good combination. He knows that work is hard, and that creating stuff is even harder; he sees the logic in new workplace paradigms, but is never so wide-eyed as to think that the old models don’t have significant virtues.

In my next job, I wouldn’t mind if Scott Berkun were my boss. Just as long as he let me work from home.