The Internet Is Not the Answer 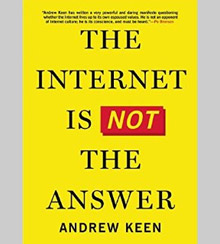 Here’s yet another in a growing list of books attacking the brave new Internet-centric world we live in. In the rich vein mined by authors such as Evgeny Morozov (The Net Delusion), Jaron Lanier (You Are Not a Gadget), and Nicholas Carr (The Glass Cage), Andrew Keen brings us The Internet Is Not the Answer. Keen argues that “rather than democracy and diversity…all we’ve got from the digital revolution so far is fewer jobs, an overabundance of content, an infestation of piracy, a coterie of Internet monopolists, and a radical narrowing of our economic and cultural elite.”

Those are pretty strong words, and indeed, Keen’s book is essentially a diatribe about the damage the Internet has done to our economy, our culture, and our sense of ourselves. Yet Keen speaks from experience. He founded Audiocafe.com, a first-generation Internet company, in 1995, and is currently the host of the “Keen On” Techonomy chat show and a columnist for CNN. Unlike more philosophically grounded books such as Morozov’s and Lanier’s, however, The Internet Is Not the Answer takes a decidedly empirical approach to the problem. Keen deploys more than 40 pages of footnotes (but no index) to back up his argument. However, the citations come mostly from frightening news stories or other journalists who happen to agree with him.

Much of what the 54-year-old Keen, who was born and raised in the U.K. and trained as a historian and political scientist, says will be familiar both to readers of his two previous books (Digital Vertigo, The Cult of the Amateur) and to those interested in the impact of the Internet—positive and negative alike—on society. Despite the many claims by technological optimists to the contrary, for example, Keen points out that “distributed technology doesn’t necessarily lead to distributed economics, and the cooperative nature of [the Internet’s] technology isn’t reflected in its impact on the economy.” Instead, thanks in part to the massive network effects inherent in the Internet, ours has become a winner-take-all economy. This, of course, will be nothing new to anyone concerned about the rise of the so-called 1 percent.

Keen’s description of the Internet’s effect on culture is more incisive. Again, he offers little that’s truly new on this front; however, the examples he cites are truly alarming. It’s difficult not to agree with his heartfelt rage at the prevalence of digital piracy. By one estimate, “in January 2013 alone…432 million unique Web users actively searched for content that infringes copyright.” Meanwhile, global sales of music had declined, he notes, from US$38 billion in the late 1990s to a little over $16 billion by the end of the 2000s. Are streaming sites like Spotify and Pandora the solution for artists seeking to make a living from their craft? Not according to Keen, who points out that after one of songwriter Ellen Shipley’s hit songs was streamed more than 3 million times on Pandora, she received a royalty check for $39.61.

It’s difficult not to agree with his heartfelt rage at the prevalence of digital piracy.

The Internet Is Not the Answer is full of similar gory details of how the Internet’s massive consumer surplus can also create artistic and economic deficits. And they make good reading, especially, of course, if you already agree with Keen. Yet Keen is often at his best when he reverts to actual reporting. The book begins with a description of the Battery, a recently established private club in San Francisco whose founders claim to be trying to re-create a “village pub” with a diverse clientele of regulars, but who have actually done little more than replicate the growing gap between the rich and poor in the city as a whole.

Keen also takes a memorable trip to Rochester, N.Y., where he describes vividly how the collapse of industrial-era stalwart Kodak has ravaged the city. He notes that Kodak, which once minted massive profits manufacturing, processing, and printing film, laid off 47,000 workers in 2013, the same year Instagram sold itself to Facebook for $1 billion. At the time, the photo-sharing company had just 13 full-time employees. Keen is fully aware of the irony implicit in seeing Kodak, which single-handedly brought photography within reach of the masses, being disintermediated by Instagram, which is filling the same role for free. In his view, however, the billions of dollars in value created for consumers by Instagram, as well as Skype, WhatsApp, and similar new technologies, do not compensate for what’s lost in the process.

Like many other diatribes, however, The Internet Is Not the Answer all too often deteriorates into mere complaining. Keen is at his worst when rehashing the case against Uber or describing, yet again, the rise of San Francisco’s exclusive tech buses. And he takes great pleasure in bashing Google: While lauding the company’s genius, he returns time and again to its sins—its anti-privacy stance, its role in the creation of a surveillance society, its deleterious effect on cultural production, its monopolistic power. Again, this is all pretty familiar territory by now, and some readers will likely find these passages tiresome.

Still, Keen’s overall point is an important one: “Creative destruction” is all fine and good, so long as once you’ve destroyed something, something else besides massive wealth for a very few founders and investors gets created in its place. The Internet has prospered greatly by pandering to the “consumer” as the be-all and end-all of its commercial existence—Free music! Free news! Selfies! Instant gratification! What’s not to like?—while discounting the importance of the “citizen,” who, in Keen’s account, has suffered greatly over the past two decades through the loss of jobs, privacy, and collective identity, and a declining sense of the common good. And the notion that all is OK because it is in the very nature of the Internet to leave the wreckage he describes behind is, in his view, no excuse.

If the Internet is not the answer, what is the answer? In Keen’s view, the solution to these problems lies in the hope that the Internet will grow up. But that won’t happen unless governments and companies are willing to counter the Internet’s most problematic effects through laws, regulations, and changes in how companies do business. Harking back to the trust busters of the Progressive Era, Keen surveys the many current efforts to rein in the tech companies’ monopolistic control, their massive data collection programs, their infringements on copyright, and their enabling of hate speech. He sees progress, but not enough as yet. Still, he puts his faith in history and the sense that change is inevitable. Ultimately, he believes, the disruptors will themselves be disrupted. What that will lead to is anybody’s guess.