Most corporate histories and biographies of corporate chieftains are unsatisfying books. One reason is that their authors — usually journalists — often have to research and write in a hurry and have limited access to company sources and records. Another is that the stories of most companies and business leaders simply aren’t compelling enough to sustain a reader’s interest over several hundred pages. A tech merger gone awry? A catfight at a publishing conglomerate? The rise and fall of an already forgotten dot-com? All that most people will ever want to know about most such stories will fit pretty neatly within the five to 10 pages of a magazine article. 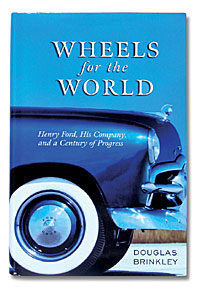 Douglas Brinkley’s Wheels for the World: Henry Ford, His Company, and a Century of Progress, 1903-2003 (Viking Penguin, 2003) is an exception. A noted historian (director of the Eisenhower Center for American Studies at the University of New Orleans) and prolific writer (14 previous books written, coauthored, or edited), Brinkley spent six years working on Wheels for the World and had free rein to rummage through the Ford Motor Company archives. Better still, he is both a Ford nut and a car nut. As a boy in the suburbs of Toledo, Ohio, Brinkley made annual field trips to the Ford Museum in Dearborn, Mich., 55 miles away. He befriended a local Ford dealer, who had been Henry Ford’s chauffeur during the Depression, and wrote a school paper about their relationship — his first attempt at history. And while pursuing his academic studies, he read not only everything he could about Ford, but also enthusiast magazines like Car & Driver and Road & Track.

Ford Motor is also an exception — a company whose history is so rich and fascinating that even a fat tome like Brinkley’s (764 pages) can tell it only in part. Many of the dramatic episodes at Ford that claim but a chapter or two in Wheels for the World — from the Shakespearean fights for control of the company to its wars with the U.S. government, the Japanese, and General Motors — could support books of their own, and in many cases they have. The literature on Ford is already as wide and deep as Lake Michigan, including such notable contributions as Allan Nevins’s exhaustive three-volume Ford, published by Scribner between 1954 and 1963; Robert Lacey’s much-admired Ford: The Men and the Machine (Little, Brown & Co., 1986), and David Halberstam’s superb The Reckoning (Morrow, 1986).

Given that legacy, it’s worth asking what Brinkley brings to the party. The answer is that he does exceedingly well at what he set out to do — to tell the story of Henry Ford and his company in a single, reader-friendly volume. For anyone steeped in the Ford literature, Wheels for the World is unlikely to impart much new information. The book doesn’t seem to be advancing brand-new theories about the company and the man, either. But Brinkley knows how to marshal his vast material, and how to use literature and pop culture to make the story come alive. Even the most bleary-eyed devotee of automotive history probably doesn’t know that the Beach Boys’ 1964 hit record Fun, Fun, Fun (till her daddy takes the T-Bird away) was based on a true incident. Brinkley tosses out that fact in a passage explaining the T-Bird’s success, noting that the song, imprinted in the minds of tens of millions of baby boomers, “has done more to enshrine the Thunderbird in automobile history than all of Ford Motor’s advertising campaigns combined.”

The story of Ford Motor and its creator is woven tightly into the larger story of America in the 20th century, and Brinkley is good at illuminating the patterns in this larger tapestry. His book is, in part, a social history of America’s love affair with the automobile, as it moves from the country to the city to the suburbs, and from the buggy to the three-car family. He quotes authors as varied as Booth Tarkington, Edith Wharton, Louis-Ferdinand Celine, Jack Kerouac, and Elmore Leonard along the way. Writing about the environmental backlash in the 1970s that turned many Americans against the automakers, he quotes novelist Joyce Carol Oates’s 1978 description of Ford’s mammoth River Rouge plant: “An industrial slum” with “porous smoke rising heavy and leaden — pale as a giant’s limbs, the sickly air heaving in gusts, sulfuric blooms whipping in the wind.” Wheels for the World tells, in similarly interesting ways, the stories of American industry’s role in the world wars, the coming-of-age of the trade union movement, and the rise and demise of the city of Detroit.

Third Strike
But the story of Ford is above all a business story, and Brinkley tells it well. Richest of all is the astounding rise of Ford from its formation in 1903 to its commanding place in American industry 20 years later, to which Brinkley devotes nearly half of Wheels for the World. Henry Ford’s success was far from certain in 1903. Ford had already started and folded two auto companies, and had shown no gift for management, much less for empire building. Competitors such as Cadillac, Oldsmobile, and Packard were already well established and successfully producing cars. Yet by 1911, Ford had built a quarter of all the cars sold in the world — and was building them at a rate of 200,000 per year by 1913. In 1921, the 5 millionth Model T was manufactured. By 1924, Fords accounted for nearly 60 percent of all automobiles made in the U.S. — as the 10 millionth Model T rolled off the assembly line.

That triumphant ascent to the zenith of American industry was followed by a plunge in the mid-1920s that nearly put the company out of business, as it missed market opportunities that General Motors was quick to exploit. Ford Motor has repeated that pattern — giddy rises in profits and market share, followed by sudden tailspins toward bankruptcy — many times in subsequent decades, right up to the present day. Wheels for the World concludes in 2002 — the second year in a row in which Ford had posted large losses — with the company trying to massively restructure its global operations under the direction of William Clay Ford Jr., CEO since late 2001 and great-grandson of the company founder. “The good news for Ford Motor Company,” concludes Brinkley, who interviewed the new CEO several times over a five-year span, “is that something about Bill Ford Jr. promises he’s up to the job.”

Bill Ford Jr. gave Brinkley broad access to the company’s archives. To his credit, he said he wanted this centennial story told “warts and all.” He got it. Wheels of the World is unblinking in examining some of the company’s dark days, such as its irresponsible — even criminal — behavior in designing and selling the Pinto in the early 1970s. The car, Brinkley shows, had a basic design flaw, of which executives were aware, that made it liable to explode in flames in even a mild rear-end collision. The flaw originated because styling took precedence over safety; engineers’ efforts to fix it were squelched in order to save money, and at least 59 people, possibly many more, burned to death as a result.

Wheels for the World also takes a hard look at Henry Ford himself. Much about Ford was admirable. The reasons he succeeded against long odds, as Brinkley tells it, were his single-minded vision of the automobile as a cheap, simple, and durable machine that could be sold in vast quantities, his fanatical determination to reduce costs and cut prices, his knack for envisioning and configuring efficient manufacturing processes, and his ability to attract and motivate brilliant architects, engineers, and businessmen. But the warts are ugly ones. Brinkley demonstrates that Ford was a liar and a hypocrite who cheated some of his initial investors and partners, and shows how he tormented his only child, Edsel, throughout his life — capped by his failure to visit as his son lay dying, at age 49, of a rare stomach ailment. And for all the advancements Ford championed in raising employee pay and decreasing hours worked (including both the eight-hour day and the 40-hour week), he also ordered or countenanced underhanded and sometimes violent anti-union activities.

Henry Ford’s Ugliest Wart
Brinkley deals squarely with Ford’s most unattractive trait of all: his vicious anti-Semitism. After running unsuccessfully for the U.S. Senate in 1918, Ford bought a local newspaper, the Dearborn Independent, and used it to reprint, over 93 weeks, an edited-for-Americans version of the notorious anti-Semitic tract The Protocols of the Elders of Zion (composed, Brinkley notes, between 1894 and 1905 by Imperial Russia’s secret police), which he forced Ford dealers to distribute, and later published and circulated widely in book form under the title The International Jew. Among its admirers was Adolf Hitler, who told an American journalist in 1923 that “We look to Heinrich Ford as the leader of the growing fascist movement in America.” Brinkley notes that Ford repudiated his anti-Semitism late in life, and that his son and grandchildren later did much to atone for it.

Wheels for the World isn’t written for managers — at least not specifically for managers. There are no organization charts, boxed case studies, or financial statements, and there’s nary a buzzword to be found. But lessons about management, leadership, and strategy will suggest themselves to anyone who brings to the book a business background — the importance of vision, the imperative to cut costs and control prices, the need for having the right leader in the right place at the right time, the disasters that can occur when your strategy fails to allow for a change in the world situation.

What Brinkley has accomplished is a rare feat: a company history that’s a pleasure to read, consistently insightful, and informative on several levels. His next project is an equally ambitious companion volume on General Motors, scheduled to be published at the company’s centennial in 2008. He has set a high bar for himself — as well as for other would-be authors of “company books.” The good news is that something about Wheels for the World promises that he’s up to the job.

Rob Norton (rob@robnorton.com) is a freelance writer, editor, and consultant in New York. A former executive editor of Fortune, where he worked for 15 years, Mr. Norton was also director of knowledge development at Nua Ltd., an Irish software firm, and is coauthor of Content Critical (Financial Times Prentice Hall, 2001) and The Web Content Style Guide (Financial Times Prentice Hall, 2001).

Topics: writers, manufacturing, design, authors, biographies
Get s+b's award-winning newsletter delivered to your inbox. Sign up No, thanks