The Curse of the Mogul: What’s Wrong with the World’s Leading Media Companies 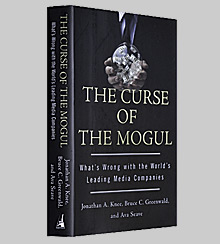 The media business has long been the home of outsized egos and shrunken returns on investment. Shareholder returns for the largest media conglomerates, which include Rupert Murdoch’s News Corp., Sumner Redstone’s Viacom, Disney, and Time Warner, have significantly underperformed the S&P 500 over the past 10 years. Three media experts — investment banker Jonathan A. Knee, Columbia Business School finance professor Bruce C. Greenwald, and consultant Ava Seave — explain why this gap exists in this meticulously detailed and documented study.

The basic theme of The Curse of the Mogul is that effective strategy can be developed and implemented in an industry only when certain opportunities for competitive advantage exist. These sources of advantage lie in economies of scale, the ability to hold customers captive, systemic cost benefits (such as network effects), and government protection. The authors contrast these with the “sham” sources of advantage that are touted so often by the moguls — deep pockets, the greatest number of brands, creative and managerial talent, and first-mover advantages. They go on to show that the large-scale parts of the media business that the moguls have generally chosen to enter — those with global reach and blockbuster content — are precisely those in which advantage is either minimal or unlikely to be surrendered by the creative talent who generate it. The authors contend that at the other end of the value chain — local retail distribution of the content — the existing competitive advantage of conventional publications is being swiftly eroded by digital media.

Because opportunities for effective strategies are limited by the absence of true competitive advantage, the authors suggest, the moguls should focus on the efficiency of their operations, something for which they have shown little taste or talent. The authors point to the example of mogul Lew Wasserman, who produced excellent shareholder returns by creating a focused factory in MCA/Universal. Between 1959 and 1990, Wasserman’s company produced an average annual return of more than 15 percent, compared with the 5 percent annual increase in the Dow Jones Industrial Average. His disciplined management practices sound like those of regular businesses, with controlled compensation, tight budgets, and an emphasis on consistent day-to-day performance. But, according to the authors, Wasserman’s devotion to the bottom line is in sharp contrast to the contempt in which many modern moguls hold the “number crunchers” and “pencil pushers” as they pursue “vision” and “strategy.”

This book is unusually fine-grained in its arguments and detail, reflecting the deep experience of the authors and the extensive research they conducted. One may question their sweeping claim that digital media always reduces the ability to create competitive advantage, but their arguments have to be taken seriously. Their advice to the moguls: Focus less on growth and more on industry restructuring; keep your business local and focused; stress efficiency; stifle your ego; and, if all else fails, die with dignity. This last piece of advice is the one least likely to be taken. Given their track record, the media moguls are very unlikely to go gentle into that good night.