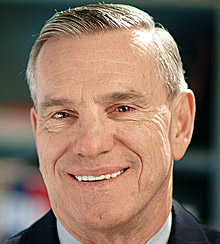 Starting with his role as an advisor to the secretary of commerce in the Reagan administration in the 1980s, and progressing to his current position as founder and president of the Economic Strategy Institute in Washington, D.C., Clyde Prestowitz has been a consistent voice on the importance of manufacturing in economic competitiveness. Although the title of his most recent book, The Betrayal of American Prosperity: Free Market Delusions, America’s Decline, and How We Must Compete in the Post-Dollar Era (Free Press, 2010), might seem alarmist to a global audience, Prestowitz’s perspective is nuanced and oriented toward fundamentals. He argues for sustained industrial policy at a national level: for marshaling the forces of business leaders, government officials, labor unions, and academics for the sake of building economic competitiveness and (especially) a strong and distinctive manufacturing base. He also argues that the global economy is more likely to thrive when more countries manage their economies this way, competing wholeheartedly even as they trade avidly.

Prestowitz focuses on manufacturing in the U.S.; its decline and revitalization have been a theme in his work since his first major book, Trading Places: How We Are Giving Our Future to Japan and How to Reclaim It (Simon & Schuster, 1988). He sat down with strategy+business at the Manufacturing Executives Forum, which Booz & Company conducted in Chicago in May 2011.

S+B: How did you come to realize the significance of manufacturing to economic vitality?
PRESTOWITZ: I grew up in a manufacturing environment. My dad worked in the steel products industry, and I visited the original Bethlehem steel mill many times as a boy. The Bethlehem Steel Corporation started to consistently lose money in the early 1980s; it declared bankruptcy in 2001 and closed in 2003. The old steel mill was then replaced with a casino. The passage from steel mill to casino says a lot about the trajectory of the U.S. economy, and about the declining quality of life for the middle class when there is no manufacturing base.

Manufacturing, more than other activities, is critical to prosperity because it generates economies of scale. It also sparks innovation, wholly new products and industries. And it has great multiplier effects: Every factory needs accountants, sandwich shops, component suppliers, and other services. One dollar invested in manufacturing creates two dollars or more of income for ancillary industries. By contrast, a dollar invested in retail creates about 45 cents of additional income.

Finally, international trade overwhelmingly involves goods. When countries like the United States have trade deficits, they are primarily in manufactured goods. Those trade deficits take away jobs. If you want to get those jobs back, there’s only one way: You’ve got to support manufacturing.

I remember, back in the 1980s, debating about whether to subsidize the American aircraft industry against the European upstart Airbus. George Shultz [then secretary of state] said that the Europeans, by subsidizing Airbus, were only hurting themselves — taxing people to pour money down a corporate rathole. Even if he was right, he was ignoring the damage done to our aircraft industry in the U.S. — and the people employed by it, directly and indirectly. Any country that wants to survive needs to focus on the industries that it wants to keep, and support them wholeheartedly.

For the past 25 years, U.S. economic policy has been driven by consumer welfare, by trying to achieve the greatest variety of goods at the lowest prices, without any focus on producers. This combines with the notion that it doesn’t matter what we make, or how we make it, because globalization will even things out in the end. One top official once said to me, “Clyde, don’t worry. The Japanese will sell us cars, and we’ll sell them poetry.” But now we need jobs, and for that, we need manufacturing.

S+B: For executives of multinational companies, it might seem counterintuitive to focus on the prosperity of their home country as opposed to global economic growth.
PRESTOWITZ: I agree that it’s wrong for the U.S., or any other country, to adopt a zero-sum mentality. For example, a rich and dynamic China can be of great benefit to the United States — but not necessarily. It depends to a tremendous extent on what kinds of policies the two countries adopt.

The conventional economic view is that unfettered global free trade will automatically produce optimal results — that China’s gains will also be the United States’ gains, and vice versa. But that view is based on simplistic assumptions: no economies of scale, no transfer of technology or capital across borders. Paul Krugman won a Nobel Prize largely because he pointed out the problems with these assumptions.

There are two kinds of global companies. In the United States, the purpose of the corporation is primarily to provide optimal returns to shareholders. This leads to a focus on optimizing short-term results. In continental Europe and most of Asia, the state charters the corporation and gives it a lot of specific benefits; in exchange, the corporation provides benefits to society. This leads naturally to embracing a coherent industrial policy.

S+B: What do you mean by a coherent industrial policy?
PRESTOWITZ: There’s a lot of misunderstanding about this. It’s associated with pre–World War II Britain and France, whose governments supported particular companies as national champions. People assume it means having governments pick winners and losers.

Look instead at countries like Singapore, Sweden, Taiwan, Germany, Korea, Switzerland, Finland, and China. They’re all very different; some are democratic, others are authoritarian. The Finns and Swedes have strong labor unions, whereas unions in Taiwan and Singapore are weak. But all these countries are economically successful for the same reasons. First, their governments focus on being competitive by promoting selected high-value-added industries, with a long planning horizon. Second, they have a high level of coordination among the government, labor unions, and business management, in investment decisions, wages, and inflation rates. They don’t pick winning companies; instead, they build a consensus on what each of them has to do to contribute [to building a vibrant industry]. Compared to other countries that have taken a more laissez-faire approach, their performance is far superior.

S+B: This approach implies a very nuanced attitude toward economic policy — being neither all open nor all closed.
PRESTOWITZ: Absolutely. It means you have to think about how you invest. President Obama is currently [in June 2011] putting money into developing green energy. That’s admirable, but the amount is relatively small compared with the massive programs supporting the same industries in China, Japan, Korea, Germany, and Denmark. And producers of green energy products in those countries have free access to the U.S. market, with much bigger scale than the U.S.-based producers have, because their governments have created much bigger projects. If the U.S. really wants to create a viable green industry, it will take more money — but money is not enough. U.S. policies for trade, investment, and research and development all have to fit together, taking into consideration what other countries are doing, and finding a few niches in which to develop dominance.

S+B: Is there a good model of some sector that has made this kind of investment work?
PRESTOWITZ: The American semiconductor industry has handled itself very well over the years. In the 1980s, it was weakened by Japanese, Korean, and Taiwanese competitors, all supported by their countries’ industrial policies. U.S. industry leaders explained it to the requisite officials in the U.S. Commerce Department and persuaded them to act. The result was the U.S.–Japan Semiconductor Agreement of 1986; it effectively guaranteed U.S. producers 20 percent of the Japanese market and prevented Japanese dumping [selling underpriced goods to drive out competition] in the U.S. market. That was a sensible policy. It was followed by similar agreements with Korea and others.

Also in 1987, the government and 14 companies launched Sematech (the name Sematech derived from Semiconductor Manufacturing Technology), which was a 50/50 government–industry consortium aimed at maintaining the competitiveness of U.S. semiconductor equipment manufacturers. [In 1994, Sematech’s board voted to discontinue federal support on the grounds that the U.S. semiconductor industry had fully recovered; the organization continues today as an international innovation consortium.]

S+B: What do you say to business or government leaders who, rightly or wrongly, don’t trust one another enough to act this way?
PRESTOWITZ: It should not be that difficult a problem. Industry needs government all the time — often in ways that it doesn’t fully acknowledge. I hear CEOs talking about how they hate to go to Washington, and how U.S. taxes are too high. At the same time, they want Washington to do more to protect their intellectual property from appropriation by Chinese companies. They complain about the official “buy China” rules [forcing companies that want to sell goods in China to produce there]. And to whom do they complain? To the U.S. government.

An astute government official would take advantage of this situation. He or she would do more to enforce international intellectual property rules, and respond more fiercely to China’s innovation policies [in which countries entering China are forced into R&D-sharing joint ventures]. But the official would also say to the CEO, “I’m taking care of my part of the deal, but you need to think more broadly as well.”

S+B: You’re asking for sweeping changes in the way some policymakers think. How do we get from here to there, especially in a very partisan political climate?
PRESTOWITZ: It probably takes a crisis. I think the last economic crisis wasn’t bad enough to force the changes we need. We should have nationalized the banks or gotten rid of their management. The bankers should have taken a haircut. And we should have much more discipline on Wall Street.

The world is going to be tougher for Americans than it was between 1945 and 2000, when the U.S. had absolute economic dominance. That wasn’t normal; we’re just getting back to normal now. But within that new normal, I have great confidence that the United States can maintain a high and rising standard of living. If I think of the global economy like a game of bridge, I think the U.S. has a better hand of cards than any other player: better than the European Union, Japan, China, or India. But as any bridge player knows, it’s very possible to have good cards and lose if you don’t play the cards well. The U.S. has not been playing its cards well for quite some time. If we change the quality of our game, we won’t have to begrudge China’s success — or the success of Brazil, India, or anyone else. We can all be successful.