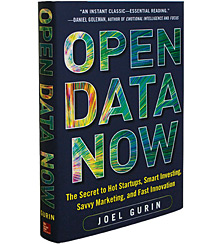 Making useful data public” is the thread that Joel Gurin sees running through his own otherwise varied career: serving as chief of the Consumer and Governmental Affairs Bureau at the Federal Communications Commission, working as executive vice president at Consumers Union, and, most recently, helping set up a New York University think tank called the Governance Lab. His new book, Open Data Now, offers something of a twist on that mission. He hopes to make public data profitable.

The promise of open data has been trumpeted before. And we are familiar with the oft-cited success stories: the U.S. military–born Global Positioning System that former president Ronald Reagan opened to civilians, making possible your in-car navigation system, Foursquare, and more; and the National Weather Service data that has proven a boon for both news organizations and startups like the Climate Corporation, a San Francisco firm that sells insurance to farmers. Impressive stuff, no doubt. But lately there’s a sense in the air that if, as Obama suggested, cracking open government databases just might “transform the way we do almost everything,” it’s time for broad-based proof.

Open Data Now, a guidebook for a movement at a critical stage in its development, seeks to provide such proof. Toward that end, Gurin appends a list of 500 companies that was compiled by the Governance Lab in the first comprehensive study of U.S. companies using open government data. For instance, the founders of Enigma, a New York City startup, figured out that you can pinpoint where every new McDonald’s will open by searching the Federal Communications Commission databases for pending licenses for drive-through window intercoms. Panjiva, a global trading platform, got its start using U.S. customs data. Real estate website Zillow utilizes labor statistics and census data in its formulas. A healthcare management app developer called iTriage taps the national health provider registry. Data collected by federal regulators helps power SigFig, a personal finance site that offers investment analysis and guidance. And there’s a cousin to public data: freely contributed user data upon which collaborative businesses like tech industry guide CrunchBase and health data social aggregator PatientsLikeMe are built.

Although Gurin’s main theme is the entrepreneurial opportunities of open data, its transformative power is not restricted to new business creation. Tom Lee of the Sunlight Foundation, a transparency advocacy group, has argued that opening government databases is worthwhile even if it never directly makes anyone a penny. The truly big benefits, according to Lee, are “better governance, more efficient markets, and smarter business decisions.” In a way, Gurin doesn’t disagree. By illuminating the need for more transparency about the operations of our biggest institutions, “the financial crisis,” he writes, “has become one of the most compelling arguments for Open Data.”

And that’s a good thing, because even as Gurin calls open data “a massive resource with enormous business value,” he also knows that working with it can be as daunting a challenge as working with “big data.” The Climate Corporation had to file countless Freedom of Information Act requests to shake loose federal data on agricultural lands. Bankers justifiably complain that the XBRL data reporting standard of the U.S. Securities and Exchange Commission is cumbersome and pointless. And although the White House’s website Data.gov was launched to great fanfare in 2009, it “has not been easy to use,” admits Gurin, who chaired a White House task force on so-called smart disclosure—the idea that giving the public access to data via well-designed websites was going to produce better consumers and better citizens.

Another problematic website that recently made more than its fair share of international headlines could prove to be an object lesson in both the benefits and the challenges of open data: HealthCare.gov. Healthcare was the subject of the Obama administration’s earliest and most spirited open data work. For example, the administration convened “health datapaloozas” to explore how data-driven innovation might improve healthcare, and HealthCare.gov itself is populated with data extracted from Medicare, Medicaid, and other insurers. We haven’t reaped those rewards yet, but it’s become increasingly clear that successfully building businesses—or historic public policy—on the promise of open data will be hard work. Perhaps, though, that’s what makes it an exciting prospect.