Soon: An Overdue History of Procrastination, from Leonardo and Darwin to You and Me 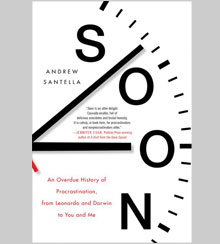 In late 1934, a department store magnate named Edgar Kaufmann engaged Frank Lloyd Wright to design a weekend home in the woods an hour or so southeast of Pittsburgh. It was a huge boon for Wright — his reputation had waned, commissions had dried up in the Depression, and his home and studio were threatened with foreclosure. The architect visited the Kaufmann site, asked for a survey, and then, the story goes, didn’t do a damn thing.

Nine months later, Kaufmann unexpectedly visited Wright’s studio to look at the design for his new home, which, he had been told, was progressing beautifully. Wright reportedly put pencil to paper for the first time. Two hours later, he presented Kaufmann with a plan for Fallingwater, an acknowledged masterpiece of residential architecture.

“The only way to explain the nine months Wright spent not working on Fallingwater is by procrastination’s perverse logic. Nothing was the only thing that could be done in such a situation,” writes Andrew Santella in Soon, his engaging, meandering, and, of course, overdue exploration of the behavioral tic.

Santella, a sophisticated and widely published essayist who also coaches baseball at a high school in Brooklyn, doesn’t claim to know why Wright procrastinated. But he raises a skeptical eyebrow at our tendency to interpret such stories as mysterious workings of genius. “This is something like what I tell my wife when she finds me snoozing on the couch,” he says. “I may look like I’m taking a nap, but I’m really writing. I’m always writing.”

It’s clear to me that Santella knows the vagaries of procrastination firsthand, because I, too, am always writing. Procrastination is so ingrained in me that to deny it or to seek to exorcise it feels, to cite a faddish leadership term, inauthentic. And I appreciate Santella’s refusal to try to cure me of my tic as much as I support his disinclination to romanticize it.

Perhaps there is no cure. As Soon shows, procrastination has survived centuries of attack from a variety of institutions of social control, including corporations and churches. In Armenia, in the fourth century, a Roman centurion who had decided to give up his pagan ways and become a Christian met a talking crow. The crow suggested the centurion take another day to think about it. “Realizing that the crow was, in fact, the Devil in avian form arrived to tempt him, the centurion — who would later be venerated as St. Expedite, patron saint of procrastinators — did something remarkable,” writes Santella. “He stomped the talking bird to death.”

A millennium later, Italian business owners installed clock towers to regulate their employees. “This is also when clocks began to tell us what we were worth,” explains Santella. “From the beginning, these rising towers enabled a new attitude toward time and the need to deploy it wisely.”

“The blithe dereliction characteristic of our contract economy has helped normalize procrastination.”

Fast-forward 500 years, and we encounter Frederick Winslow Taylor, the patron scourge of procrastinators, who tried to eradicate our behavioral tic with the invention of scientific management. Taylor, who was sarcastically nicknamed “Speedy” by the workers at the Watertown Arsenal in Massachusetts, noticed that industrial workforces were unable to move faster than their slowest worker. He called this “soldiering” and dedicated himself to wiping it out. “Soldiering is related to procrastination, in that the soldierer sabotages the efforts of the collective the way a procrastinator frustrates himself,” writes Santella.

Jump another 100 years and behold the era of the gig worker. “Now, entire sections of Brooklyn and Chicago and Portland and Austin are populated almost entirely by loitering freelancers — which is to say procrastinators,” observes Santella. “The blithe dereliction characteristic of our contract economy has helped normalize procrastination.” But Speedy must be spinning swiftly in his grave.

That is the best reason for executives, who have likely spent their careers completing to-do lists early and asking, “More, please,” to read Soon. Better a devil you know than one you don’t.