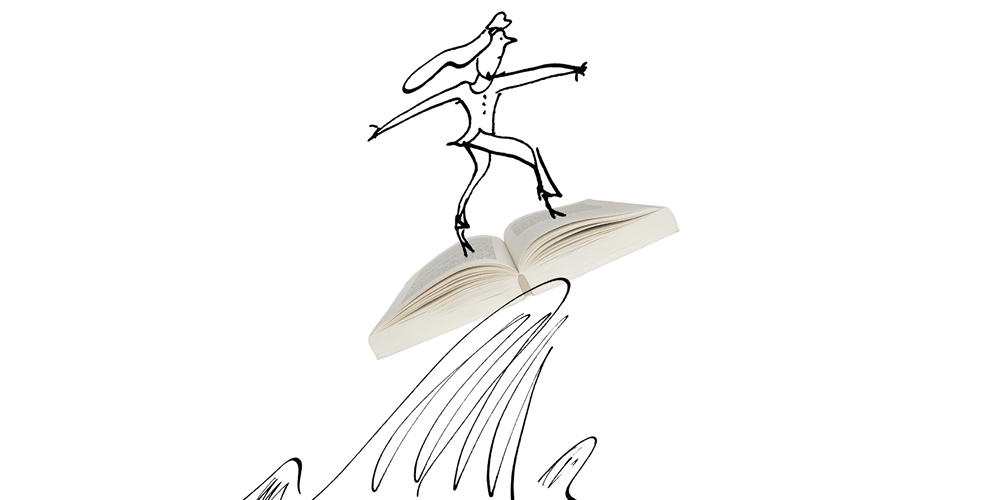 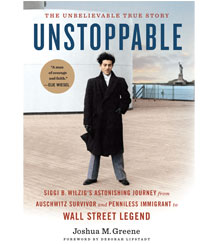 Each word in the lengthy title of Holocaust scholar Joshua M. Greene’s wonderful new book resonates in the finely wrought text: Unstoppable: Siggi B. Wilzig’s Astonishing Journey from Auschwitz Survivor and Penniless Immigrant to Wall Street Legend. That is why this compelling tale of suffering, persecution, and triumph is the best business book in the form of a historical narrative this year. Born in 1926 in Poland, Wilzig lost his parents, three brothers, and a sister to the Nazis and barely survived Auschwitz himself before coming to America and rising to great heights in two industries in which antisemitism was common.

Wilzig’s survival at a time when so many died—nearly all Jews deported to Auschwitz perished within four months of arrival—was due to a mixture of audaciousness, pragmatism, a certain propensity for bull, and luck bordering on the miraculous that would mark his entire life. Upon arrival at the camp, the 16-year-old declared himself a master toolmaker, despite the fact that he had never worked in the trade. As a result, he was ordered into the line of those who would be sent to work rather than those who would be killed immediately.

After the war, he went to work for the Americans, helping to hunt down Nazis. His captures included Hans Goebbels, the younger brother of Joseph Goebbels. And his work earned him a visa to the United States. He arrived in 1947 at the age of 21 with only US$240 and no education beyond grade school. “The Almighty had saved him, and now his job was to grab whatever scraps remained from the rubble of his life and cobble them back together into an edifice of yet-to-be-determined size and shape,” Greene recounts in one of the many instances of lovely writing in his book. Wilzig got his first job shoveling snow for $2 a day.

America was a fraught haven for a Jew who wanted to go into certain kinds of business. “As a point of reference, well into the 1960s Jews constituted only about 1% of high-level executives in finance, heavy industry, communications, transportation, and public utilities,” Greene writes. “An American Jewish Committee survey of the 25 largest banks in the United States in the 1970s found only one Jew among 377 commercial bank officers in senior management positions.”

Wilzig created chances for himself. A “world-class storyteller, comedian, and charmer” who was unafraid of failure or hard work, he might tell people with perfect panache that he’d been a quarterback or a track star, depending on his audience. They’d believe him. Then he’d show them his Auschwitz tattoo.

Wilzig might tell people with perfect panache that he’d been a quarterback or a track star, depending on his audience. They’d believe him. Then he’d show them his Auschwitz tattoo.

“If students of business were to study Siggi B. Wilzig’s business methods, they might conclude that success was commensurate with gall and stress,” Greene writes. Nonetheless, those chances that Wilzig created for himself met a very prepared mind.

At a dinner in the early 1960s for Sol Diamond, a prominent entrepreneur in Newark, N.J., Wilzig, then a nascent investor, discovered that he and Diamond had both started buying stock in a small oil concern called the Wilshire Oil Company of Texas, which had tracts of land in Texas, New Mexico, Wyoming, and California. The company was run terribly, and both Wilzig and Diamond had spotted opportunity—but Diamond said he was too old to lead a takeover. Would Wilzig consider doing it in his stead?

Wilzig enlisted friends, family, and anyone else he could find to accumulate enough stock to threaten the board with a takeover. Within a year, after he had impressed the board with his plans and the previous president had died of a heart attack, Wilzig became the president and CEO.

Shortly thereafter, in 1969, Wilzig used similar tactics to take over a bank called the Trust Company of New Jersey—at which point he was the CEO of both an oil company listed on the New York Stock Exchange and a multibillion-dollar commercial bank. “That he did so in two of postwar America’s most antisemitic industries makes his achievements even more astonishing,” Greene writes.

Wilzig’s acquisition of a bank wasn’t at all random. In effect, Wilzig was channeling his contemporary Warren Buffett, who bought his first insurance business in 1967. Buffett’s brilliant insight was to use the “float” from insurance premiums to finance other businesses; Wilzig saw how he could use the cash from a bank for similar ends. If Wilshire could acquire 80% or more of the bank’s stock, the bank could “upstream” to Wilshire the tax dollars that were otherwise due to the government. That money could help Wilshire finance its growth. (Perhaps not incidentally, Wilzig was ahead of his time in other ways, too: Trust Company of New Jersey might have been the first bank to give stock options to everyone, including entry-level administrative employees.)

Wilzig couldn’t abide being told no. He announced his purchase of the bank just as the Nixon administration was putting in place emergency measures to break inflation under the leadership of a tough new Federal Reserve chairman named Paul Volcker. One of the rules was that any nonbanking company that owned or operated a bank would have to divest either the banking or the nonbanking operations. Wilzig—and all other bankers—had a decade to comply. When the time came, the Fed told him that they’d notified nearly 400 parent companies that they had to get rid of their banking subsidiaries. Wilzig was the only one who refused to do so.

At this point, Wilzig sued the Federal Reserve. Of course, he eventually lost this unwinnable battle. In the meantime, he put his daughter, Sherry, in charge of the oil business, meaning that the divestment was in name only.

His bank thrived. In 2004, the year after Wilzig died of advanced multiple myeloma, it was sold for $753 million, which represented a “breathtaking” 6,755% gain from the date of the spin-off in 1983.

The book, of course, is more than the story of a businessman who succeeded despite the odds. It’s also a book about faith—not an easy faith, but a complicated one. “I have a mixed relationship with God,” Wilzig told his son Alan. “I go to synagogue on all the Jewish holidays to give thanks to the Almighty. Without the will of the Almighty, there’s no way a shorty like me should have survived the Holocaust. But I don’t go to synagogue every week. I have a hard time being thankful for the murder of a million and a half Jewish children, or the murder of my innocent 7-year-old nephew and 2-year-old niece.”

His success did not allow him to escape his demons. In 1979, scholar Helen Epstein published Children of the Holocaust, in which she said she “set out to find a group of people who, like me, were possessed by a history they had never lived.” Wilzig exhibited many of the characteristics mentioned in Epstein’s book. “If we dared to question or disobey, he lashed out in cruel ways such as pretending to withhold his love,” his son Ivan once said. “He always loved us, but it didn’t always feel that way.”

In an interview with Steven Spielberg for the USC Shoah Foundation, Wilzig said this: “When people ask me this question, ‘How did you survive?’ I leave out a small thing, which isn’t really small. Namely, any survivor who has a heart and brains lives with guilt, that they survived and others didn’t…here I am, and they’re all dead.”

He never let go of his anger, either, even if it was buried below humor, gratitude, and defiance. When he spoke at the US Military Academy at West Point in 1975, the first Holocaust survivor to do so, he asked, “Why did the world stand by and do nothing? …The government did know. They knew as early as 1943.”

But he also knew who had won. Once, he was asked what he’d say to Hitler. “Nothing would pain him more than to see the rebirth of the nation of Israel,” Wilzig responded. “We survived him…just as we survived the Crusades and the Spanish Inquisition and Stalin and the murderous PLO. I would show him beautiful little Jewish children and I wouldn’t have to say a thing.” 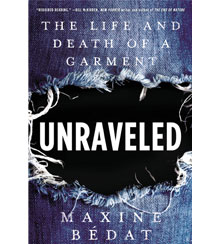 Unraveled: The Life and Death of a Garment
by Maxine Bedat (Portfolio, 2021)

This biography of a humble garment—a pair of jeans—offers a window into the global economy and shines a spotlight on its efficiencies, inequities, and interconnections. An executive at a nonprofit that aims to green the fashion industry, Bedat traces the journey of raw cotton from Texas to factories in China and garment plants in South Asia—and ultimately to markets in Africa where secondhand pants find a second life. 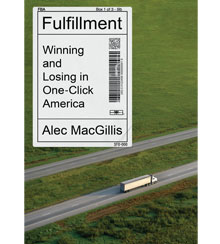 The click of a single button on an e-commerce site sets into motion a massive chain of events—and, over time, creates immense social and economic impacts. In Fulfillment, MacGillis, a journalist with ProPublica, delves deep into the ecosystem that has built up around Amazon, including warehouses in Baltimore, office towers in Seattle, and data centers and logistics outposts all over the country.