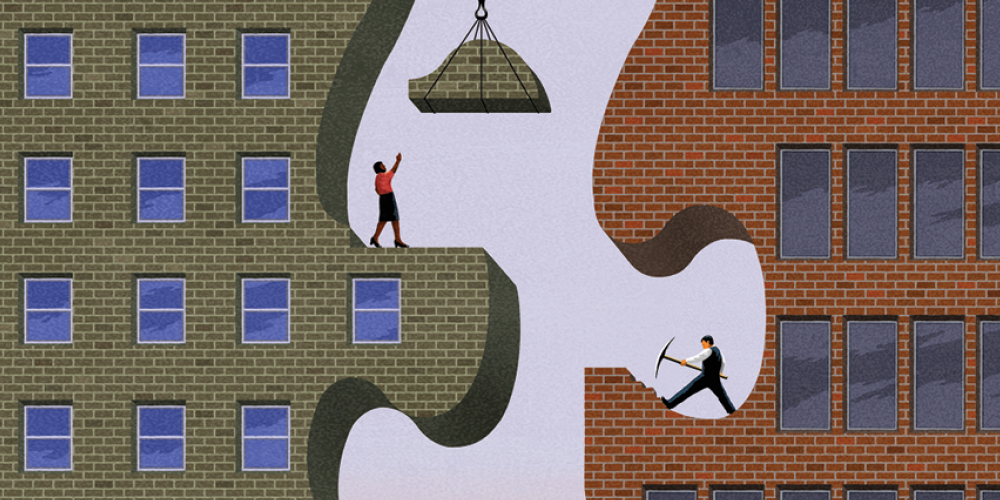 Relationships matter, which is why the deals world revolves as much around chance conversations as it does scheduled meetings and planned strategic maneuvers. COVID-19 has changed those serendipitous encounters and the get-togethers that help dealmakers build trust. That said, the dealmaking machinery is far from idle. Despite a lack of physical meetings, deals are still going ahead. Ten-hour videoconferences aren’t unusual. Site visits are a challenge, but drone technology presents a reasonable solution. Cosmetics firm Coty, which was looking for buyers, said it was considering the use of drones for due diligence; in May 2020, it sold its Wella and Clairol brands to U.S. investment giant KKR in a deal worth US$4.3 billon.

The strategic rationale for seeking a deal hasn't changed and everything companies have always needed to complete a transaction is still in place, but the priorities have changed.  As businesses emerge from lockdowns due to COVID-19 and debt markets reopen (and as we observe the surge in big companies raising money through corporate bonds), the types of deals we see and the reasons behind them are likely to reshape industries. The pressures of the economic downturn and the need for many companies to restructure their balance sheet will create opportunities. But both buyers and sellers need to be aware of the challenges of executing long-term strategies under short-term pressures.

At the point of the novel coronavirus outbreak, we were in what was predominantly a sellers’ market. Deal activity was strong — more than 52,000 deals were completed in 2018, compared with 27,000 in 2002. PwC’s “Creating value beyond the deal” research found that just 61 percent of acquiring companies believed that their previous acquisition created value, and just 21 percent believed it created significant value, a reflection of the high multiples. Some of the largest deals of all time were announced during 2019 — such as the $74 billion pharma sector merger between Bristol-Myers Squibb and Celgene — and total deal value rose by 23 percent year on year to $407.5 billion.

The pressures of the economic downturn and the need for many companies to restructure their balance sheet will create opportunities.

But in 2019, deal volume in the U.S. was down by 15 percent in the fourth quarter compared with the third quarter. Even so, a “normal” 2020 was forecast. According to PwC’s 23rd Annual Global CEO Survey, 35 percent of CEOs were planning to grow through at least one merger or acquisition during 2020. This was down only 2 percent from the previous year, despite CEOs expecting slower economic growth for 2020. And that was before COVID-19.

In the short term, a few deals that were underway before the outbreak are still going ahead; some have been accelerated in an attempt to anticipate the worst of the fallout; most have been paused as valuation and financing issues are assessed. According to Dealogic, an investment analysis company, the first quarter of 2020 recorded the lowest deal volume in seven years and showed a 35.5 percent decrease in year-on-year volume.

As far as the longer term is concerned, once a baseline has been established for valuations, deals will begin to build again. How will post-COVID-19 dealmaking affect corporate strategy and reputation? Here are eight areas to consider.

A good business is still a good business. The lockdown has pushed revenues for consumer-oriented businesses off a figurative cliff; we are working with one company that has seen its turnover fall virtually overnight to 1 percent of normal levels. Some sectors will suffer more than others as a result of the pandemic, and some businesses will be caught out by an acceleration of existing trends (such as the shift toward online retail). The pandemic will mark the end for businesses that were propped up by a decade-long boom and quantitative easing — cheap money. Meanwhile, businesses that have been hit hard by the pandemic but have solid fundamentals may find themselves acquisition targets.

A release of pent-up demand is inevitable. We expect to see a wave of deal activity, driven by cash-rich funds and corporations with strong balance sheets, once debt becomes more available. This might coincide with a relaxation of lockdown restrictions but could easily happen beforehand. Some sellers will be hungry for cash, and buyers will be looking for opportunities. Many private equity (PE) houses are in a strong position to invest; it’s estimated that PE firms were sitting on $2.5 trillion at mid-2019 and that U.S. corporations had access to about $2.2 trillion — four times the cash they held in 1995.

That said, one of the biggest uncertainties is the speed at which countries lift restrictions in the coming months. If the novel coronavirus makes a comeback, it is probable that many countries will face either a longer period of lockdown or an extended strategy in which restrictions are eased and then reimposed over months or even years. Either of those could force a second liquidity crisis and have implications for deal valuations and access to debt markets — but it won’t halt deal activity altogether.

Corporations will divest to focus on their crown jewels. As we emerge from the crisis, we expect to see a rise in M&A activity (reflecting a pre-pandemic trend) as corporations begin to divest from areas of their business that they can no longer justify and focus on their strongest business lines. Not all of the businesses put up for sale will be failing — Unilever’s divestment of its spreads business for €6.83 billion (US$8 billion) in 2017 is a good example of a multinational selling a profitable business in order to sharpen its portfolio for long-term growth. But some companies may be forced to sell profitable businesses in order to raise cash. One example is Thyssenkrupp’s sale of its elevators division to Advent International, Cinven, and RAG Foundation for €17.2 billion (US$18.9 billion) earlier in 2020.

Some sectors will see more activity than others. It’s already clear that certain sectors will be irrevocably changed by COVID-19. When this is over, will we travel as much as we did before? For business travel, at least, it’s unlikely — the habit has been broken. Videoconferencing, in most instances, is a good and considerably more sustainable (and far, far cheaper) substitute. Deals in the travel and leisure sector, therefore, are likely to be largely a matter of survival: The hunt for cash is on.

But in other industries, decisions will be driven more by strategy. The pandemic is acting as a catalyst for changes that were already underway; for example, online retailers will emerge stronger, migration to the cloud will accelerate, and demand for data centers, already at an all-time high, will increase. Strong businesses may take the opportunity to adapt their business models to this new normal, perhaps acquiring parts of their supply chain or picking off underperforming competitors.

The pandemic has encouraged a new type of transaction. The $1 billion investment in Airbnb by Sixth Street Partners and others in early April is a good example of a fundamentally sound business seeking a capital injection to see it through the crisis. We expect to see more of this type of activity this year as businesses start to recover but are short of cash to fund growth.

PE houses are also willing to play a longer game than before. Research by INSEADPDF  identified a surge in funds earmarked for long-term investing in recent years. The target holding period of an investment has typically been three to five years; INSEAD identified an increase in funds with intended lives of 15 to 20 years. This echoes anecdotal evidence that PE houses are increasingly willing to invest in businesses with a long-term strategic growth plan, allowing the companies to pursue their strategy free from the short-term pressures of more activist shareholder investment.

The age of high multiples for all deals is over. Multiples on deals have crept skyward in recent years, with the result that many investors have become reluctant to transact. As deal activity picks up, buyers will still be willing to countenance high multiples for strong companies, but more realistic valuations will come into play for others. Buyers will be far more discerning and able to bargain harder.

There is a new tension between globalization and localization. The pandemic has exposed the downside of globalization; when parts of China entered lockdown in January, the impact on supply chains around the world was sudden and dramatic. Jaguar Land Rover was forced to fly vital components out of China in suitcases to prevent its U.K. plants from running out of parts, and Samsung made similar arrangements to fly electrical components from China to its factories in Vietnam. The pandemic could persuade some companies to nearshore critical functions. At the very least, we expect many to seek to build greater optionality into their supply chain or explore new partnerships that could help to mitigate risk in the future. We’re also expecting a reset of real estate strategy as the crisis has shown that many workers, including those normally based in call centers, have been able to function effectively from home.

ESG considerations may gain ground. Environmental, social, and governance (ESG) issues were rising on the agendas of investors and asset managers before the pandemic hit; in our latest Private Equity Responsible Investment Survey, 81 percent of respondents said they now report on ESG matters to their boards, 67 percent said they are prioritizing and identifying the United Nations’ Sustainable Development Goals when they consider investments, and 72 percent said they have a team developing KPIs to report on their investments. In the sensitive recovery period following the pandemic, it’s possible that ESG considerations could take center stage among PE investors’ buying criteria. ESG investment strategies that benefit investors, communities, and the planet are seen as creating value that goes beyond financial profit. This being the case, they can help companies reach a wider audience of stakeholders who are increasingly considering ESG when they make investments.

This crisis has changed the world of deals, as it has changed nearly everything else. We will emerge into a new normal where buyers rather than sellers are in the driver’s seat. Some sectors will be changed forever — as will the way we do business — and many of those changes will be a consequence of the deals that are done in the coming months. For example, we envisage a time when polluting assets are bought and transformed into low-carbon businesses in “buy dirty, sell clean” transactions as investors start modeling this new “impact turnaround” approach.

Trust and relationships built up over time, we believe, will play an even more important role as deals are structured while face-to-face meetings remain constrained. Deals activity in the next 12 months, as world economies start to reopen and rebuild, may be the most consequential of the next decade. Companies will face critical choices in the way they respond to the COVID-19 crisis, which will determine whether they remain viable in the long term. Whether and how to operate in the M&A market may end up being a deciding factor.