Emotional Agility: Get Unstuck, Embrace Change, and Thrive in Work and Life 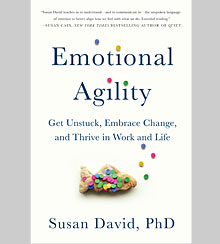 The just-concluded presidential election has taught us Americans a lot about ourselves. One lesson it may have provided is about the efficacy of what Susan David, a psychologist on the faculty of Harvard Medical School, calls emotional agility.

Emotionally agile people are winners. “They demonstrate flexibility in dealing with our fast-changing, complex world,” David writes in Emotional Agility: Get Unstuck, Embrace Change, and Thrive in Work and Life (Avery, 2016). “They are able to tolerate high levels of stress and to endure setbacks, while remaining engaged, open, and receptive. They understand that life isn’t always easy, but they continue to act according to their most cherished values and pursue their big, long-term goals.” Although they experience feelings of anger and sadness, as all humans do, “they face these with curiosity, self-compassion, and acceptance,” she writes. “And rather than letting these feelings derail them, emotionally agile people effectively turn themselves — warts and all — toward their loftiest ambitions.”

Emotional agility is a kind of mashup of two concepts that are now popular among the corporate set: mindfulness and purpose. It is rooted in acceptance and commitment therapy (ACT), a psychotherapy approach dating to the 1980s that entails acknowledging emotional responses in a mindful way, without denial or overreaction, and then moving forward in a purposeful, value-driven direction.

“Emotional agility is a mashup of two concepts popular among the corporate set these days: mindfulness and purpose.”

In David’s view, we often get “hooked” by our emotions, which causes us to sabotage our own success. We’ve been hooked when we blame our thoughts for our actions (even though thoughts in isolation can’t cause actions); or when we act in counterproductive ways based on old, outgrown ideas; or when a fixation on being right causes us to — as my Italian grandparents delighted in pointing out to me when I was a kid — cut off our nose to spite our face. We can avoid these hooks, David argues, by training ourselves in the discipline of emotional agility, which “unfolds in four essential movements.”

The first movement is simply “showing up.” Woody Allen famously said that 80 percent of success is showing up — but David goes beyond wry observation. Showing up is a mind-set of self-acceptance and self-compassion that sets the stage for labeling your emotions and understanding their function, instead of following them into whatever rabbit hole they scurry down.

Next comes “stepping out.” Here, David enlists mindfulness techniques to help us create a space between ourselves and our emotions. “This wiggle room and breathing space you create gives you the great gift of choice,” she writes. “You begin to experience thoughts as just thoughts — which is all they really are — rather than as directives that must be followed, or even agonized over.”

In the third movement, “walking your way,” we exercise the gift of choice by acting independently of emotional hooks. Ideally, that means acting in accordance with our core values and purpose — which, of course, presupposes that we know what they are. But David stumbles into controversial territory as she discusses the difficulties we can encounter in identifying our true values as opposed to simply adopting the values of others. She cites studies on social contagion and, in a sentence very similar to one that brought public wrath down upon the author of the discredited New Thought bestseller The Secret, David writes, “Your risk of becoming obese increases with each obese person you come into contact with.”

The final movement, “moving on,” is about attaining long-term goals and ambitions through tiny tweaks. According to David, “You can tweak your beliefs — or what psychologists call your mindset; you can tweak your motivations; and you can tweak your habits.” In other words, people can realize their dreams in the same way they can eat an elephant — one bite at a time.

Unlike her popular 2013 Harvard Business Review article (coauthored with Christina Congleton) that introduced the idea, David aims this book at a broader, more general audience. She does, however, dedicate a chapter to emotional agility at work, where she discusses how people can get hooked on the job, and how a more proactive approach to job-crafting can help us get where we want to go — as long as the job isn’t totally wrong for us in the first place.

David claims that emotional agility is “key to well-being and success.” But she seeks to prove the point by weaving together research rather than by offering definitive proof. So let’s take a post-election straw poll: Now that you know the name of the next president of the United States, do you believe emotional agility played a role in the victor’s success or not?