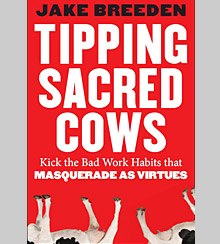 “Don’t bring me any surprises. Don’t bring me a problem without a solution.” Do these phrases sound familiar? They are manifestations of a managerial mind-set that Jake Breeden rightly calls out in his new book, Tipping Sacred Cows, as an unhealthy obsession with excellence. The demand that employees get everything right is deadly for innovation, experimentation, and discovery. When excellence is defined as living in a world of no surprises, you aren’t going to get any…until it’s too late.

For innovation to thrive, you need a little messiness, a tolerance for intelligent failures, and a willingness to engage in trial-and-error learning. As the Lean Startup movement is proving, you’ll discover more from launching a “minimum viable product” than you will from conducting seemingly endless prelaunch analyses. When it comes to communicating your ideas, you’ll make a bigger splash with a quick, colorful story, replete with mistakes, than a thick deck of perfectly formatted PowerPoint slides. And when it comes to keeping people energized and engaged, you’ll get much better results by focusing their creativity on a few key things than by cajoling them to be excellent at thousands of small ones. Breeden’s advice for making a conscious decision about where excellence matters and where it doesn’t is extraordinarily pertinent.

An excerpt from chapter 5 of Tipping Sacred Cows:
Kick the Bad Work Habits That Masquerade as Virtues


Ella ran a team responsible for marketing a drug for a large pharmaceutical company. Ella held herself and her team to the same high standards. She choreographed product launch events with the same relentless attention to detail that had driven her academic success. After earning a PhD in biology from Stanford and an MBA at Harvard, Ella had a long track record of striving for high standards. So Ella was shocked when her boss took her aside to tell her she was in danger of receiving a poor annual review. For the first few seconds of the conversation, all she could hear was the sound of her own heartbeat thumping in her chest. She replayed all of the sacrifices she had made for her job, and she was outraged. What else did he want from her?

“Ella, I think you thrive on intensity,” her boss said. “But things aren’t just intense on your team. They’re tense.”

As her pulse finally slowed, Ella realized that the one professional value she treasured most—excellence—had backfired. In school and in the early part of her career, Ella’s obsession with producing the best work had always paid off. But something was broken now. Armed with this insight, Ella applied her well-developed “excellence muscle” to the new task of creating a more supportive culture and making it safer for her team to ask for help. She started to listen more to her team and less to the relentless voice inside her head demanding that every action be perfect. Ella didn’t need to lower her standards—she needed to raise her game.

High achievers like Ella sometimes obsess over excellence to the point of missing the bigger picture. Smart leaders understand that a maniacal focus on excellence can lead to blind obsession that lowers productivity and derails careers. But Ella was lucky enough to have a leader who helped her see her blind spot, and she was smart enough to learn to keep her high standards but broaden her perspective.

If you ever need to kill someone’s point in an argument, just whip out the mighty sword of excellence. It’s the strongest weapon leaders have to win debates. “We need to protect our brand” is a nice way to frame it. Or if that doesn’t work, blame someone else: “Our customers deserve better than this.” Or invoke a higher power: “The CEO of this company won’t accept lowering our standards, and neither will I.” And if you need to buttress your argument with a pithy quote from a great leader, you have many to choose from. If you want to quote an American sports hero, use Vince Lombardi: “I will demand a commitment to excellence and to victory, and that is what life is all about.” If you prefer a military hero, choose Colin Powell: “If you are going to achieve excellence in big things, you develop the habit in little matters. Excellence is not an exception, it is a prevailing attitude.”

I especially detest the Colin Powell quote. Keep your desk neat, straighten your tie, practice your penmanship, and make sure you never make a suggestion that you can’t support with rigorous data. Develop the habit of excellence in little matters. It’s condescending advice that suggests you don’t have the self-control to turn your excellence on and off. But too often it’s advice that leaders have internalized because of the long, persistent campaign from experts who preach the value of excellence. If you work on an assembly line and want to keep working on that same assembly line for the rest of your life, I agree completely. Show up on time and execute with excellence. As long as you’re certain you’ll never need to innovate or grow, focus on excellence in every single thing you do. Otherwise, you’re going to have to get comfortable with a little bit of low quality from time to time.

My advice: be excellent occasionally. I doubt these words have been uttered by many head football coaches or four-star generals. But when we study leaders who accomplish great things, they seem to have a sixth sense that gives themselves permission to produce second-rate work on the way to doing a first-rate job. Often, the best leaders don’t stop to think about their comfort with crap, and they certainly don’t advertise it. They need their people to believe in their own ability to do great things…. How do you know when it’s OK to lower your standards and still end up accomplishing great things?

Creating a tense environment as Ella did hurts workplace morale, reduces employee engagement, and decreases the chances of innovation and change. And excellence can backfire even for the leaders who don’t have direct reports. Demanding excellence in every idea you share or rough draft you create is a recipe for aborting innovation before it has a chance to exist and grow into something meaningful. The easiest time to kill an idea is at its birth. And the easiest way to kill a weak, newborn idea is with the sharp blade of exacting standards.

Excellence not only kills ideas, it kills energy. When leaders demand perfection even in the unimportant details of their workday they waste emotional and intellectual energy, leaving less of their most precious resources for the work that matters most. Leaders too often demand excellence in the small things because they lack the will to prioritize what matters most. Love all your children the same, but don’t love all your work the same. Some activities matter more and therefore merit more of your attention. Leaders must have the discipline and energy to make tough choices and give differently to different tasks. It’s intellectually lazy to work hard at everything.