The Tetris Effect: The Game That Hypnotized the World 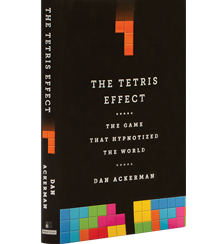 Decades before you lost your first few hours to Candy Crush, Tetris had cast its spell over video game players worldwide. The concept of Tetris, which originated deep behind the Iron Curtain in the 1980s, is deceptively simple: You manipulate different shapes of bricks, or tetronimoes, as they fall at an increasingly fast pace, to form rows of horizontal lines. A Russian folk tune plays in the background. But the game can quickly turn on you — one wrong move and the pieces start to pile up. The game ends, and then you play again, and again, and again.

Unlike many modern addictive games, Tetris has no plot, no cute animals, and no lifelike animation. And yet Tetris is one of the most popular video games of all time. It has been downloaded more than 500 million times on mobile devices, and authorized copies have earned close to US$1 billion in total sales. Not bad for a piece of code that traces its origins to the waning days of Soviet Russia.

Tetris was the brainchild of a Soviet engineer, Alexey Pajitnov, working on an outdated desktop computer at the Russian Academy of Sciences. When he invented the game in 1984, Pajitnov and his colleagues knew the game was special — it spread quickly throughout the academy by word-of-mouth and floppy disk, like a piece of samizdat. But pre-glasnost and pre-perestroika, the notion of taking Tetris outside the country, let alone commercializing it, was difficult even to imagine.

Tetris was the brainchild of a Soviet engineer working on an outdated desktop computer at the Russian Academy of Sciences.

The story of the next five years, leading up to the moment in 1989 when Nintendo secured the living room console rights to Tetris, is a complex, winding tale. And in The Tetris Effect: The Game That Hypnotized the World, Dan Ackerman, a journalist and editor at the tech site CNET, unravels it.

The game’s soaring popularity, and its potential for massive profits, quickly attracted the attention of the business world. At one point, in early 1989, executives from Japan, the U.K., and the U.S. literally race to Moscow to vie for licensing rights. “With such a perfect combination of widespread dissemination, psychological triggers, and basic human greed,” Ackerman writes, “it’s not surprising that Tetris was one of the world’s first ‘viral’ hits.”

Ackerman introduces a long cast of characters, and over the course of the book we learn more about their motivations and machinations. The effect can be a bit dizzying at times as he toggles back and forth between different players and places. Coders, lawyers, and executives jump in and out of the narrative, all while Ackerman painstakingly describes how the rights to Tetris for various channels were licensed and sublicensed by an ever-widening web of software companies.

There’s Henk Rogers, the surfer-turned-programmer who ultimately finds himself working on behalf of Nintendo. His story is perhaps the most breathless; the book opens with Rogers flying into Moscow on plane jointly operated by Japan Airlines and the Soviet state-run Aeroflot with a tourist visa, a checkbook, and little else. Among some of the other key players are the British communications mogul Robert Maxwell and his son, Kevin; Nikoli Belikov, the bureaucrat who served as lead negotiator for a Soviet bureau called Electronorgtechnica (ELORG), an enigmatic division of the Soviet Ministry of Trade tasked with licensing rights for technology developed by state agencies; and of course, Pajitnov, the engineer who created Tetris, and watched for years as others profited.

The Tetris Effect is also an ode to the game itself. A chapter of the book is devoted to the story of journalist Jeffrey Goldsmith, who is credited with coining the term Tetris effect. In 1990, while staying with a friend in Tokyo, Goldsmith played the game for six straight weeks, barely stopping to eat and drink, and noticed that he started seeing people and cars on the street as pieces that he was trying to fit together. In a Wired article, “This Is Your Brain on Tetris,” he described the pharmatronic (another term he coined, to describe an electronic drug) effect the game has on the brain.

This is a recurring theme throughout this fast-paced, gripping book: Playing Tetris can actually change the way your brain is wired. The game’s repetitive patterns, and the repetitive activity it inspires, enables Tetris to imprint itself on the brain, and can shape a player’s thoughts. Ackerman notes that an Oxford University researcher has shown that playing Tetris shortly after experiencing a trauma can prevent painful memories from repeatedly terrorizing victims. They can remember the events, but because the way in which the events are remembered is altered, victims avoid some of the symptoms of post-traumatic stress disorder. Ackerman also mentions a 2014 study that found that smokers and drinkers who played Tetris reduced their cravings by roughly 24 percent. In other words, the addictive game can prove to be a weapon in the war against addictive behavior.

In his epilogue, Ackerman writes that “Tetris is bringing order to disorder. It’s the eternal struggle against the onslaught of daily life, in all its colorful randomness, seeming to fall on you from the sky.” A bit grandiose? Maybe. But few popular games have inspired Tetris’s level of academic and scientific study. Even the question of whether Tetris can be “won” is steeped in philosophy and physics. But those of us who’ve been sucked into the vortex can appreciate Ackerman’s assessment: “A classic Tetris game will inevitably end, and mathematicians can do the same thing you and I do when a casual game goes wrong after a dozen pieces — blame those damn Z shapes.”