Phineas Taylor Barnum’s future was bright. He believed from the age of 4 that his grandfather, pleased to have his grandson as his namesake, had purchased the most valuable farm in Connecticut in Barnum's name. For years, the boy’s grandfather talked about the farm and his neighbors congratulated him on being the richest child in the town of Bethel. At the age of 12, Barnum was taken to see his farm. It was five worthless, inaccessible acres in a large swamp. Everyone had a great laugh. 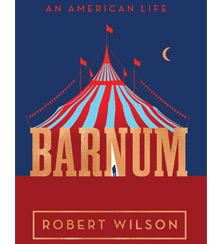 Robert Wilson, editor of the American Scholar and author of Barnum, sees the roots of the 19th-century American showman’s outsized pecuniary drive in “this strangely cruel and astonishingly drawn-out joke.” But it’s hard to judge whether the story is true — the only citation Wilson offers is Barnum’s autobiography, which should give the reader pause, considering its author’s reputation for humbug and penchant for spinning his own life story.

If Barnum didn’t stretch the story (or invent it outright), it also may reveal the roots of his preternatural talent for hucksterism. Certainly, he elevated the joke to unprecedented heights with a series of frauds so entertaining to American and European audiences of every social class that instead of shunning him, they rewarded him with riches that beggared the promise of the farm that never was. He also provided an early and, sadly, enduring lesson in the use of brazen hype, shameless self-promotion, and fake news as the basis of a successful business.

Barnum was already a serial entrepreneur in his teens, having started several businesses, including a bar and steak house in New York City and a general store in Bethel. But his most successful venture was a private lottery, which he promoted throughout Connecticut with newspaper ads, handbills, and circulars. His copy was so compelling that by 1830, 20-year-old Barnum had lottery offices in five cities and his agents were ringing up as much as US$2,000 per day (in 1830 dollars) in sales.

When Connecticut’s religious institutions condemned lotteries as a form of gambling, several newspapers began refusing Barnum’s ads. So with his business threatened, Barnum became an activist for the separation of church and state, and then a newspaper publisher himself — getting an insider’s view of how that business worked. Ultimately, Barnum lost the fight. In 1834, Connecticut banned lotteries and his entire business collapsed. “The old proverb, ‘Easy come, easy go,’ was too true in my case,” he wrote.

Undaunted, Barnum promptly moved his family to New York City and began rebuilding his empire. He opened a boardinghouse and bought into a grocery store. It was in the grocery store, in 1835, that Barnum heard about an enslaved black woman named Joice Heth, who was said to have been present at the birth of George Washington in 1732 and served “dear little George” as a nursemaid. Heth was supposedly 161 years old. Barnum quickly bought the right to exhibit Heth for $1,000.

Wilson strives to place this act in the context of the times, but he admits it was “the most troubling venture Barnum ever undertook.” It’s no wonder. Barnum exhibited Heth in a number of East Coast cities, allegedly paying off newspapermen to write stories lending credibility to her age and history. When it was all revealed as fake news, Barnum fed the controversy with a variety of equally spurious explanations, getting a boost in attendance for his efforts. After Heth became ill and died in early 1836, Barnum even sold tickets to her autopsy. In all, Wilson reports, Barnum collected an estimated $10,000 from his $1,000 investment, plus $700 from the 50-cent tickets to the postmortem.

Then Barnum followed the model he had established with Heth. Wilson details his subsequent successes, including the so-called Feejee Mermaid, which was actually the upper body of a monkey attached to the lower half of a large fish; the diminutive “General” Tom Thumb, who was four years old when Barnum first began exhibiting him; and Jenny (the “Swedish Nightingale”) Lind, whose captivating voice and beauty made Barnum millions. Barnum purchased private museums and their collections of curiosities, distant relatives of today’s Ripley’s Believe It or Not! Odditoriums, to generate a steady source of revenue and host his “exhibits.” Eventually, he took the entire show on the road, a venture that resulted in the Barnum & Bailey Circus, whose tagline was, naturally, the “Greatest Show on Earth.”

Like many of the robber barons who were his contemporaries, as Barnum became richer, he sought to transcend his less-savory antics with more civic-minded projects and philanthropy. Wilson offers up Barnum’s generous support of the Universalist Church and Tufts College (now University) as evidence of his philanthropic largesse. And he notes Barnum’s two terms in the Connecticut House of Representatives in the 1860s and his service as mayor of Bridgeport, Conn., in 1875.

Barnum probably never said, ‘There’s a sucker born every minute,’ but it’s hard to read this book and not conclude that it was his credo.

Wilson also credits the showman with cementing Bridgeport’s status as the state’s largest city and industrial center. Starting in the early 1850s, Barnum invested in land and established East Bridgeport, a venture he characterized as “profitable philanthropy” in his autobiography. “He would build bridges to the new city, pay for the laying out of streets, the planting of trees, and the preservation of land for a park, and even lend money at a favorable rate to those who wished to contribute to the overall beauty and desirability of the place,” explains Wilson. “But he would do it in a way that enhanced his own investment.”

Nevertheless, nearly 130 years after his death in 1891, at age 80, Barnum is remembered mostly for his humbugs and hucksterism, not his business achievements and good works. Wilson tries mightily to redeem him — or at least rebalance the scales. But even though there is no evidence that Barnum ever said, “There’s a sucker born every minute,” it’s hard to read this biography and not conclude that it was his credo.