Psyched Up: How the Science of Mental Preparation Can Help You Succeed 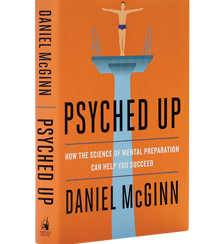 Mindfulness is all the rage in the corporate world today. If we can just gain more self-awareness and get in touch with what makes us tick, the thinking goes, we can all be more successful.

In his engaging and original book, Psyched Up: How the Science of Mental Preparation Can Help You Succeed, Daniel McGinn takes us far beyond the clichés of yoga poses, centering exercises, and nap rooms. McGinn, an editor at the Harvard Business Review with a “lifelong fascination with how people get psyched up before important events,” as he describes it, has traveled around the country to visit operating rooms, performance halls, baseball fields, sales floors, and other high-pressure work environments to learn how people with a range of skills and backgrounds prepare themselves mentally for the rigors of their daily work.

The results are very satisfying. McGinn is a good-humored, self-effacing, and highly articulate guide to fascinating terrain. Psyched Up is much more of an anthropological exploration than a self-help book. It is grounded in the deep analysis of lived experience rather than hard data.

It’s fascinating to track the quirks of human behavior that seem to work. “Nearly every performer does some set of steps to help them reduce anxiety, increase confidence, and get into the right mindset to perform,” McGinn writes. We meet a surgeon and former college wrestler who worked with a sports psychologist to “create a highly choreographed routine of mental preparation” — drinking three cups of coffee, running through a series of visualizations, turning on a country music playlist. Although the surgeon has no proof these things help, McGinn reports, “he believes his routine boosts his focus and concentration when it matters most, reducing the odds he’ll make a mistake.” And that’s the key. In some instances there may be science — or social science — to support the utility of habits, rituals, and superstitions, but in general they work if you believe they work.

Before he goes on stage, comedian Steven Colbert rings a bell, has his producer say “Squeeze out some sunshine,” and touches hands with every backstage worker. NBA star LeBron James has a pregame ritual that involves a unique handshake for every player. Former Boston Red Sox third baseman Wade Boggs (McGinn is from the Boston area, so there are an alarming number of Red Sox references in the book) “ate chicken before every game, took 117 ground balls during every infield batting practice,” and so on.

Pregame rituals are not just for celebrities and professional athletes. Psyched Up shows that ordinary people benefit from them as well. In one experiment, a group of people who were primed to say “I’m so excited” before singing the inspirational Journey anthem “Don’t Stop Believin’” in the Karaoke Revolution Glee video game scored significantly higher than those who were primed to say “I’m so anxious.” Rather than try to tamp down anxiety and seek calm, which is often impossible, McGinn concludes, “the smarter strategy is to force yourself to make the more subtle, achievable mental shift from nervousness to excitement.”

To a large degree, it turns out, we con ourselves into thinking we are better than we are simply by association with certain objects. In a study involving amateur golfers who were given putters, half were told their putter had been owned by a successful professional golfer, and the other half were told nothing. The ones who thought they had a putter used by a pro “sank 32 percent more putts than the control group.”

Another finding: Loudly pumping yourself up can pay dividends. In a Harvard study, two groups were about to embark on a scavenger hunt. One group formed a circle, did some rhythmic clapping, and shouted “Let’s go!” three times. The other group sat and quietly read an article. Who did better in the hunt? The first group. An analysis of pep-talk scenes in classic movies such as Hoosiers finds that pep talks work when they impart useful information on how the team can do a job better, when they explain why the task at hand is important, and when they use “empathetic language.”

The cast of characters in Psyched Up is compelling and diverse: We meet sales executives and violin teachers; the guy who spins walk-up music at Red Sox games; Jim Peterik, who co-wrote perhaps the ultimate pump-up song, “Eye of the Tiger”; tennis impresario Nick Bollettieri; and John Legere, the chief executive officer of T-Mobile known for his long hair, casual dress, and frequent taunting and trash-talking of his rivals.

McGinn, with his mix of history, on-the-ground reporting, and lucid explications of academic studies, clearly draws some inspiration from Malcolm Gladwell. Indeed, he does so directly. Wanting to test the hypothesis that using the equipment of greats bolsters confidence, McGinn sent Gladwell a computer keyboard, which the writer used for three months, then sent back. McGinn later reflects, “Did [using it] increase my confidence by some small percentage? Yes!”

That’s not the only time McGinn served as his own guinea pig. After learning that many people take beta blockers to help them perform in public with less anxiety, and modafinil (a narcolepsy drug) to help them stay alert, he experimented briefly with both. On a small dose of modafinil, he writes, “I worked steadily with few breaks for eleven hours. I [was] less distracted and more focused.”

These drugs work because they change the chemistry of our brains and bodies. But they also may work because we have been taught that they work. Psyching yourself up is a lot about psyching yourself out — tricking your mind so that it removes the barriers it places in your own way.

This point is brought home in a punch line late in the book. When a friend who was about to make a high-stakes presentation to his CEO asked McGinn for a few beta blockers, the author went to CVS, bought some vitamin B12, and gave his friend the placebos. Came the report: “Those pills are magic.”