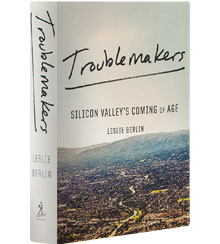 Steve Jobs was 21 years old when he met Mike Markkula in 1976. Jobs had been urged to seek out the 30-something consultant to help figure out how to turn Apple into a business. Markkula, a marketing expert, had made enough money at Intel (where Andy Grove famously believed that marketers didn’t actually do anything) to spend his time woodworking and playing tennis. His big idea for Jobs? Write a business plan.

Jobs did not know how to write a business plan, nor did he especially seem to want to know. So Markkula told him again. And again. Eventually it became clear that there was only one way that it would get done: Markkula would have to write it himself. And so he did.

Markkula is one of the heroes of Leslie Berlin’s Troublemakers: Silicon Valley’s Coming of Age, a history of the area’s formative period of the 1970s and 1980s. When Markkula retired from Apple in 1997, John Markoff in the New York Times wrote that he was invariably “described as little more than the experienced executive who brought ‘adult supervision’ to the fledgling Apple Computer.”

In this absorbing book, Berlin tries to rescue Markkula and other forgotten pioneers from the shadows of history. She tells the stories of Markkula, longtime manager of the Xerox PARC computer lab Bob Taylor, founder of Stanford’s Office of Technology Licensing Niels Reimers, Genentech cofounder Bob Swanson, and software pioneer Sandra Kurtzig, among others. And although some were well known at the time — “Steve Jobs was the youngest. I was the woman” in every Silicon Valley article of the period, Kurtzig tells Berlin — the memory of their work has largely faded.

It takes a little while for the qualities that tie together Berlin’s “troublemakers” to come into focus. Almost all of them had an engineering background: Markkula got a master’s degree in engineering while working at Hughes Aerospace, and Kurtzig was one of just seven women in Stanford’s engineering program in the late 1960s. But they were not mainly superstar technologists like Apple’s Steve Wozniak. They all had vision, yet were not messianic visionaries like computer pioneer Doug Engelbart or Steve Jobs. They were neither financial wizards nor academic luminaries.

What, then, was their edge? As Berlin’s narrative unspools, it becomes clear that the troublemakers were connectors who were able to focus and direct the work of scientific visionaries and technical experts. They created the conditions that enabled huge technological leaps. This theme can seem somewhat familiar; Taylor’s weekly seminars for the brightest minds in computer science, for example, are also a centerpiece of Michael Hiltzik’s history of Xerox PARC, Dealers of Lightning.

But Berlin adds a lot of depth and new characters to the picture. Perhaps the most fascinating story here is that of Reimers, who set up Stanford University’s groundbreaking patent program. The nuances of interaction between business and innovation make for compelling reading. In 1969, Reimers took over a licensing program that earned a mere $226 a year for Stanford. Within five years, Reimers had convinced Stanford scientists, many of whom were initially reluctant to pursue patents on academic research, to send him 343 potentially patentable ideas. They brought in half a million dollars in licensing revenue over the next five years.

As Berlin’s narrative unspools, it becomes clear that the troublemakers are connectors who were able to focus and direct the work of scientific visionaries and technical experts.

That was just the start. Patents would eventually turn into a behemoth, yielding hundreds of millions of dollars for Stanford, and creating the biotech industry along the way. Reimers’s biggest coup was patenting the recombinant DNA technology developed by Stanford geneticists Stanley Cohen and Herbert Boyer in 1974. Cohen and Boyer both had reservations about patenting what they saw as a core scientific technique (Cohen, in fact, never accepted his share of the patent revenues). The scientists ultimately came around as Reimers and Bob Swanson, an out-of-work venture capitalist, demonstrated its commercial possibilities. Boyer and Swanson teamed up to cofound Genentech in 1976 — which ultimately licensed and commercialized the Cohen–Boyer recombinant DNA patent.

It’s easy to see how history might have taken a different turn. Stanford could have stuck with its $226 annual patent earnings, kept to “pure” science, and not worried about commercializing its findings. And it’s likely that all of us — certainly all those dependent on Genentech’s insulin, the first real fruit of the biotech seed — would have been poorer for it.

If there is a fault in Troublemakers, it’s that the central characters don’t get themselves into quite enough trouble. Although Berlin focuses a lot of the narrative on the adult supervision, some of the unrulier characters are visible on the edge of the frame, such as Atari founder Nolan Bushnell. (Sample quote: “You didn’t worry that much about legal liability, people getting drunk. Almost everybody went home with everybody else.”) It’s not really clear why Berlin chose the mild-mannered engineer Allan Alcorn to stand in for Atari’s band of outlaws.

No matter. As Troublemakers shows again and again, it took all kinds to make Silicon Valley: anti-war activists and scientists, tinkerers and business plan writers, rebels and professional managers. But, as Berlin explains, for the whole thing to work as a business, and to change the world, Silicon Valley required a few people who could connect the dots and make all these groups work together. That remains the case today.