Radical Candor: Be a Kick-Ass Boss without Losing Your Humanity 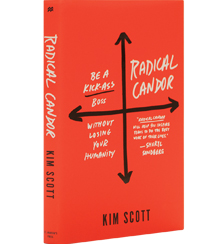 It’s been a long time since I was a wage slave. But if today’s workplace is anything like what Kim Scott describes in Radical Candor, it must be a nightmare. People are picking their noses, stinking up the joint with body odor, and tucking their underwear into the office furniture. They call each other “dumb-a**” and cry a lot. Crying. It sounds like preschool for grownups.

Or maybe that’s just business as usual in Silicon Valley, where Scott, an entrepreneur, executive, and executive coach, spent a decade or so. She ran online sales and service at Google’s AdSense, YouTube, and DoubleClick, where she worked for her Harvard Business School classmate Sheryl Sandberg. Then, she joined Apple University, where she designed and taught a course for first-time managers. With those unimpeachable credentials in hand, Scott struck out on her own, coaching CEOs at Twitter, Dropbox, and Qualtrics. In 2016, she cofounded Candor Inc., a training firm built around the concept of radical candor, which she developed.

Radical candor stems from Scott’s conviction that interpersonal relationships are the currency of management. “They determine whether you can fulfill your three responsibilities as a manager: 1) to create a culture of guidance (praise and criticism) that will keep everyone moving in the right direction; 2) to understand what motivates each person on your team well enough to avoid burnout or boredom and keep the team cohesive; and 3) to drive results collaboratively,” she writes. “If you think that you can do these things without strong relationships, you are kidding yourself.”

Radical candor stems from the conviction that interpersonal relationships are the currency of management.

In Scott’s convincing telling, radical candor is a simple yet powerful managerial tool for building such relationships. It has two “dimensions”: to deliver radical candor, you need to care personally and challenge directly. “The first dimension is about being more than ‘just professional.’ It’s about giving a damn, sharing more than just your work self, and encouraging everyone who reports to you to do the same,” writes Scott. “The second dimension involves telling people when their work isn’t good enough.” And when employees don’t measure up, managers must deliver tough feedback, “making hard calls about who does what on a team, and holding a high bar for results.”

What makes radical candor such a good idea is the fact that so many managers avoid or ignore performance problems that undermine employee and organizational results. Scott offers a personal testimonial: After launching a software startup, she hired “Bob,” a great guy whose work didn’t live up to his resume. Instead of confronting Bob (“Feedback is hard,” Scott says), she tried to work around the problem. But Bob’s continued subpar performance added to her workload, making her increasingly resentful and angry. Worse, it affected the rest of her team; they couldn’t understand why their boss wasn’t correcting the situation, and they lost confidence in her. As a result, their performance tanked — and so did the startup.

The ultimate irony is that when managers don’t candidly address an employee’s shortcomings, the employee loses, too. When Scott finally mustered up the courage to fire Bob, it felt like a sucker punch to him. “Why didn’t you tell me?” he said. “Why didn’t anyone tell me? I thought you all cared about me!”

The author also makes the point that you can’t skimp on either candor or care. Scott had been giving Bob care without candor — what she calls “ruinous empathy.” Not wanting to hurt the feelings of an employee, she didn’t say anything about his performance problems. At the same time, candor without care — which Scott labels “obnoxious aggression” — is also problematic. Steve Jobs, who frequently told Apple employees “Your work is sh**,” flirted with obnoxious aggression. In Scott’s telling, obnoxious aggression is preferable to ruinous empathy because at least people know where they stand with the boss. “This explains the advantage that a**holes seem to have in the world,” explains Scott.

In the spirit of radical candor, I should note that although it starts off strong, Radical Candor becomes less interesting once Scott gets beyond explaining the core concept in the first couple of chapters. The challenge is that she’s seeking to elevate a very good and useful idea into a full-blown management philosophy. That transformation leads her into broader topics that don’t always lend themselves to simplified solutions, such as employee development and personal growth trajectories, and results improvement cycles.

The second half of the book is devoted to a collection of briefly explained tools and techniques involving how managers can go about integrating radical candor into their work. These recommendations include be humble; give feedback immediately; and praise in public, criticize in private. And they are roughly stitched together under the rubrics of building relationships, giving and getting guidance, team building and motivation, and accelerating performance. First-time managers will find this toolbox particularly valuable, although veterans are likely to be familiar with much of it.