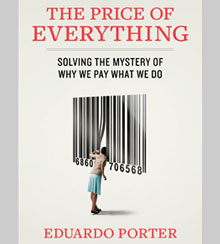 Is the price of civilization as we know it too low? Globalization and growth depend on cheap transportation, communications, capital, and resources — all of which depend on cheap energy. In 1980, as the excerpt below from Eduardo Porter’s new book relates, Julian Simon bet that the price of civilization wasn’t too low. He won his bet, seemingly proving the cornucopian view that perfect markets produce scarcity signals, which spur innovative entrepreneurs to relieve the very limitations that scarcity imposes.

There can be no doubt that technological creativity continues to astound in its ability to expand the bounds of possibility. And if Simon is right, there is no end in sight. But perhaps we should be more prudent. Prices are effective signals when they reflect the full, long-term costs of resources. However, markets (like people, because markets are made up of people) can be bipolar, swinging from exuberance to panic. And as Porter points out, the recent mortgage debacle shows us that market prices can be a risky basis for planning the future.

Have we collectively bet our civilization on a carbon bubble? It is a crucial question, because what is at stake is the price of everything.

Excerpted from Chapter 9 of The Price of Everything: Solving the Mystery of Why We Pay What We Do

Only forty years ago, as concern over population growth and environmental degradation was shaping into an environmental movement, the economist Julian Simon decided to challenge the prevailing concern about the state of the earth and dared the Stanford ecologist Paul R. Ehrlich, a noted prophet of doom, to a bet.

Ehrlich had built his reputation dusting off Malthus’s expectation of impending environmental collapse. “In the 1970s the world will undergo famines — hundreds of millions of people are going to starve to death,” he wrote in The Population Bomb in 1968. In The End of Affluence, published in 1974, he forecast “a genuine age of scarcity” by 1985. Simon would have none of it. In 1980 he challenged Ehrlich to choose any natural resource he wanted — from coal to copper to corn. If these commodities were to become scarce as the world’s population grew, their price would naturally rise. Simon bet that the price of whatever Ehrlich chose would, instead, decline over the next decade.

Ehrlich bet $1,000 on a basket of five metals — chromium, copper, nickel, tin, and tungsten. He scoffed that explaining to an economist the inevitability of rising commodity prices was like “attempting to explain odd-day-even-day gas distribution to a cranberry.” But Simon won. The world’s population grew by 800 million people over the decade. But phone companies abandoned copper wire for fiber optics. Tin cans were displaced by aluminum. And the price of every one of the metals in Ehrlich’s chosen basket fell, after accounting for inflation. Tin and tungsten plummeted 71 percent.

Ehrlich sent Simon his winnings: a check for $576.07 — which amounted to the extent of the fall in the basket’s price. Ever since, the wager has provided a victorious narrative for the school of thought that we can ride global warming out without enormous sacrifices. Opponents of efforts to reduce emissions of carbon into the atmosphere wield Simon’s wager as a weapon. After his death in 1998, the Competitive Enterprise Institute in Washington, which spends much of its time and resources in denying climate change, created the Julian L. Simon Memorial Award to bestow upon fellow skeptics.

It seems risky to trust our ingenuity at this stage. Around the world, the planet is showing signs of stress to sustain 7 billion humans living on it.

It was barely over two years ago, in the spring and summer of 2008, just before banks across the rich world started buckling under the weight of bad mortgages, that the price of corn, wheat, and soybeans shot to unprecedented heights on the board of the Chicago Mercantile Exchange. There were food riots in Egypt and Bangladesh. In Haiti’s sprawling slum of Cité Soleil, mud cookies — a mixture of dirt, salt, and vegetable shortening — became the food of choice as the price of rice soared out of most Haitians’ reach. Prices of iron and steel jumped too. On July 3, Brent crude oil from the North Sea peaked at $143.95 a barrel — 94 percent higher than its price just twelve months before.

We were momentarily saved from this catastrophe by a global recession of which we had not seen the like since the 1930s. But as soon as the world started growing again, we started hitting some of the same constraints. Oil prices, which dropped to a trough of $33.73 a barrel after Christmas in 2008, were back above $80 in April of 2010. In August, on fears of a global shortage, the Food and Agriculture Organization’s food price index surged to its highest level since September 2008. Martin Wolf, the usually serene economic columnist for the Financial Times, wrote that limits to economic growth could topple civilization. A world that over the past two hundred years had grown itself out of many of its problems could easily slip back to a zero-sum reality in which one group’s gain would result in another’s loss, in which the only chance to get ahead would be to steal, repress, and plunder. Democracy and peace work in a world of increasing opportunities where people can invest and trade their way to prosperity. If there are limits to growth, Wolf warned: “The political underpinning of our world falls apart.”

And if there is any doubt that resources in the future will be more expensive than they were in the past, one need go no further than Ehrlich’s basket. Between 1990 and 2008 the basket roughly doubled in price, after inflation. The price of tungsten zoomed up 150 percent. The price of chromium jumped 138 percent. Simon got lucky in his choice of decade. But it would seem foolhardy for us to trust that our luck will hold forever.