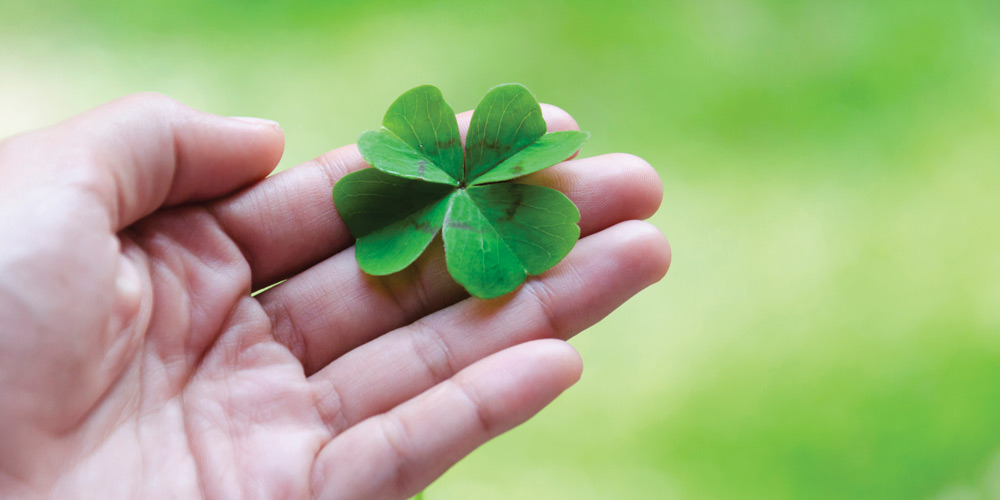 Recently, on a social media site for professionals, I suggested that luck plays a significant role in leadership and business success. This didn’t sit well with several commentors, who argued that successful people become that way largely by dint of merit — they work hard and use their brains and hone their ability to identify and exploit opportunities. People like Bill Gates and Warren Buffett make their own luck, I was told.

Hogwash. This is not to detract from the monumental business achievements of two of America’s wealthiest (and most philanthropic) men. But we should acknowledge that Gates and Buffett both drew winning tickets in the birth lottery. Gates’s dad co-founded a law firm and served as president of the Washington State Bar Association; his mom, who came from a family of bankers, held prominent board positions. They sent their son to one of the best prep schools in the nation and then to Harvard, where, with their assent and support, he dropped out to start a computer software company. Mary Gates helped her son’s fledgling company get the IBM contract that led to MS-DOS. Warren Buffett was the son of a U.S. congressman — Howard Buffett represented Nebraska in the House of Representatives for four terms, and founded a brokerage firm. Warren’s parents sent him to the Wharton School of the University of Pennsylvania, the University of Nebraska, and Columbia Business School, where he studied with and was mentored by Benjamin Graham, the father of value investing. Buffett’s first job was in his father’s firm and then he went to work for Graham. Nobody gave Gates or Buffett their billions, or even their first tens of millions. But when they pulled themselves up by their bootstraps, the climb wasn’t as far as it would be for most of us.

Nobody gave Gates or Buffett their billions. But when they pulled themselves up by their bootstraps, the climb wasn’t as far as it would be for most of us.

Once leaders attain positions of power, luck continues to play a powerful role in their success. Take Jack Welch, who was named “manager of the century” by Fortune in 1999. This past June, Joe Nocera of Bloomberg BusinessWeek revisited Welch’s tenure at General Electric and pegged the beginning of Welch’s extraordinarily successful run as CEO to August 13, 1982 — the first day of an 18-year bull market that produced a 2,400 percent increase in stocks. GE outran its peers, thanks to its swashbuckling financial arm, GE Capital, which expanded far and wide and accounted for much of the company’s growth. Of course, the unit’s woes when the financial crisis hit nearly sunk GE entirely in 2008 — and the company is a shadow of its former self today. The bottom line: Jack Welch was a prodigiously talented CEO who enjoyed a terrific run of luck.

You could argue that I’m cherry-picking anecdotal evidence. But a growing body of research supports the outsized role of luck in success. Gregory Clark, an economics professor at the University of California, Davis, studied the vagaries of birthright and reported his findings in The Son Also Rises: Surnames and the History of Social Mobility. Clark used uncommon surnames to match up the wealth of parents and that of their offspring in England, the United States, Sweden, India, Japan, Korea, China, Taiwan, and Chile over 800 years. He discovered that “the rich beget the rich, the poor beget the poor.” This reality is not as much a result of the transfer of wealth as it is the gifts of healthy genes, confidence, education, and connections that comes with being lucky enough to be born into a well-to-do family. Clark confirms that where you start has a lot to do with where you end up.

As for the role that luck plays in career success, a trio of professors from the University of Catania in Italy — Alessandro Pluchino, Alessio Emanuele Biondo, and Andrea Rapisarda — created a model in which multiple simulation runs were used to track the success of 1,000 individuals over a series of lucky and unlucky events spanning 40-year careers. The result? “If it is true that some degree of talent is necessary to be successful in life,” they report, “almost never [do] the most talented people reach the highest peaks of success, being overtaken by mediocre but sensibly luckier individuals.”

It’s understandable that some leaders might have a difficult time accepting the role of luck in their success. If you have attained a leadership position, chalking your status up to luck calls into question the basis of your achievement, your identity…and perhaps your compensation. And if you aspire to become a leader, it suggests that you have less control over the ultimate success of your quest than you may think. Moreover, the idea that luck counts for more than talent is likely to inflame faithful capitalists who subscribe to the dogma of entrepreneurship and free enterprise, which holds that opportunity is available to anyone who develops their abilities and works hard.

Look at it this way instead: Perhaps accepting the role of luck in leadership success offers a pathway to humility. It may even serve as an effective preventive measure against hubris — a common hazard of success. It can be hard for leaders to keep both feet on the ground when everyone is singing their praises. Some of those accolades are probably well deserved, but savvy leaders will remember that it is highly unlikely all of them are.