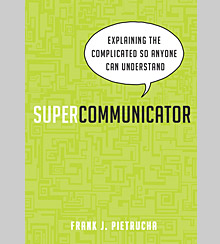 Henry James was once on an extended stay at the country house of one of his moneyed friends in England. Everyone else was out visiting other grandees, the story goes, when a bevy of local youths came to the door begging for a little money so they could buy treats from the town’s sweetshop. It was the custom for the lord of the manor to shell out for these urchins—a minor case of noblesse oblige.

The expectations of the youths were high as they knocked on the door. The great writer, too, was enthusiastic as the conversation began; he knew the sweetshop in question and was a patron. He started to explain, in endless, circuitous Jamesian phrases, the nature of candy, the varieties available at that particular shop, and the merits of long-lasting suckers versus the quicker gratification of the kind you could chew.

The youth contingent stared at James, at first with puzzlement and then with horror as he went on and on in his inimitable, orotund, beautifully balanced phrases. Finally, they turned en masse and ran, without any of the money they had come for. James never got over the mystery of how English boys could turn down money for treats.

A century later, many executives, particularly in high-tech industries and functions such as engineering, are in the same boat as James. They enthusiastically launch into the finer points of their subject, creating more bafflement the longer they attempt to explain it, all the while having the clear intention of doing the opposite.

It’s a modern tragedy. Our world is based on science at a level that no one but a specialist can understand, and yet when that specialist tries to explain his or her understanding to the rest of us, we want to run away. The excerpt below from Frank Pietrucha’s Supercommunicator is an antidote to this dilemma; it provides guidance and hope for leaders everywhere.

An excerpt from chapter 6 of Supercommunicator:
Explaining the Complicated So Anyone Can Understand

Veteran astronaut Joseph P. Allen told me a NASA legend that could have easily been a deleted scene from Ron Howard’s 1995 film Apollo 13. In this altered version of the movie, the focus isn’t on astronauts Jim Lovell, Jack Swigert, and Fred Haise as they fight for their lives after an explosion cripples their spacecraft en route to the moon, but what Mission Control’s Flight Director Gene Krantz, portrayed by actor Ed Harris in the film, is doing back in Houston. Described to me as “an engineer’s engineer” by Allen, Krantz wasn’t what you’d call media astute. A highly capable engineer, he lacked the ability to discuss his work in a manner anyone but an experienced technician could understand.

As the crisis escalated aboard Apollo 13, the news media demanded information from Krantz about NASA’s plan to bring the astronauts home. But there was a problem: Krantz hated giving interviews. In an act of compromise he begrudgingly agreed to a one-on-one interview with a single reporter. The press corps selected a young but promising journalist who was considered knowledgeable about the Apollo 13 mission. That reporter would serve as the media’s ambassador and get from Krantz what they collectively wanted: a good story about the crisis that had captivated the nation.

The interview, however, didn’t pan out as well as the media had hoped. The highly sought meeting began with Krantz pulling out two massive system diagram manuals. He opened the first tome—several inches thick—and lectured the lone reporter on the technical specifications of the modules. He described the mechanics of the operation in great detail, using jargon only an aeronautical engineer could comprehend. Using detail after detail, Krantz elaborated on the inner workings of the countless bits and pieces that powered the Apollo mission. He finished the first book and proceeded onto the second, equally intimidating. Krantz got further into the weeds, elaborating on facts only relevant to a specialist. The engineer didn’t make eye contact once during the interview, nor did he let up for a second to allow the journalist to ask a question or say, “Slow down.”

After exactly one hour the journalist raced out of the interview room and passed his colleagues as he gunned toward the exit. The other reporters stopped him and demanded to know what Krantz said in the interview. All the journalist could muster was: “They’re gonna get ‘em back safely.”

The reporters that day learned nothing new from Krantz that was helpful in explaining plans to save the doomed astronauts. Krantz had so much information he wanted to share, but by giving the journalist so much, none of it made sense. Knowing thy audience is crucial. Understanding the audience’s educational background, technological experience, and need for the information is a top priority to avoid issues like this from derailing your communication efforts.

Some smart people excel at explaining complicated content to nonspecialists, while others bomb. There are several reasons many of them find it so difficult to communicate in layman’s terms:

• THEY WERE TAUGHT HOW TO COMMUNICATE TO PEERS, NOT TO BROADER AUDIENCES. Most educational systems teach specialists to communicate to like-minded people using specialized language. This might be efficient for peer-to-peer communication, but it’s a hindrance when these same individuals need to communicate outside their immediate professional circle.

• THEY LIVE IN A BUBBLE. Many professionals live and breathe their science or technology. They work long hours together, socialize together, and sometimes live together. They find it hard to comprehend that others outside their world don’t share their excitement for the latest gadgets or small discovery. The more engrossed they get in their profession, the more difficult it is for them to relate to folks not in their field.

• THEY’RE TOO BUSY. Professionals stretched to their limits often don’t have time to customize their communications for specific audiences. Consequently, a one-size-fits-all approach is created out of necessity. Customizing papers, web content, and presentations to select audiences is time consuming—but failure to do so can lead to a communication meltdown.

• THEY’RE DRIVEN BY EGO. We humans can’t help ourselves. We want to impress our audiences with our intelligence—it’s in our DNA. Many specialists often, consciously or subconsciously, use their platforms to make themselves look smart. Unfortunately, speaking or writing to impress often comes at the cost of failing to reach your audience with meaning.

If you’re a technically minded individual—do any of the above points describe you? Sometimes appreciation of your issue with audience awareness can be the key that unlocks your potential as a better communicator. You can work on ways to find commonalities with your audience and develop empathy with them. You can expose yourself to people outside your immediate circle to give you a more balanced perspective on the world. And you can most certainly learn to see your communication efforts not as a way to show off, but as a way to bring meaning to the people who need your expertise. Be proactive—talk to your colleagues in sales and marketing about your communication style.

“Work on ways to find commonalities with your audience and develop empathy with them.”

If you’re an executive or communications pro working with a technically minded individual fitting one or more of the above points—can you figure out a way to help that person overcome these challenges? Effective managers help employees identify shortcomings and work with them to find solutions. You can give them the time to focus on audience needs when putting together presentations. You can gently alert them to their myopia and suggest ways to broaden their worldview. And you can work with them directly to help them see how their frame of reference impacts their outreach efforts. Be proactive, but understanding.

Copyright © 2014 Frank J. Pietrucha. Reprinted with permission of Amacom Books, a division of the American Management Association. All rights reserved.